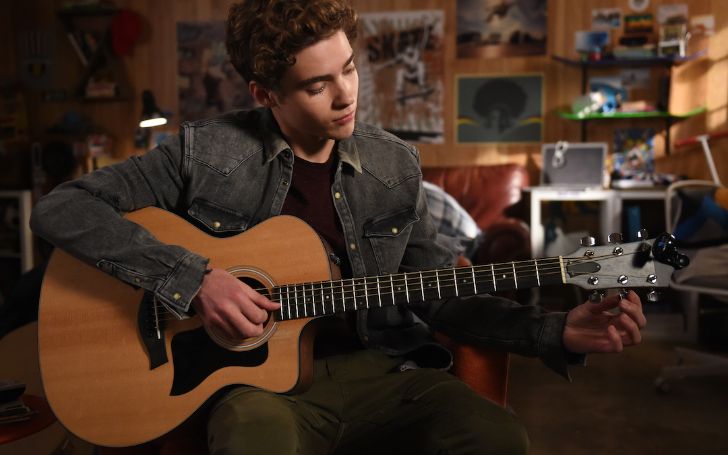 American actor and singer Joshua Bassett is a new sensation in the town who has won hearts with his role in High School Musical: The Musical: The Series. In the series, he portrays Ricky Bowen who develops a romantic relationship with Nini, played by Olivia Rodrigo.

Well, Joshua’s incredible chemistry with his onscreen-girlfriend Olivia raised several questions about their relationship in real life. However, sources report that they are not dating behind the camera.

Since Joshua Bassett is not romancing Olivia Rodrigo, his fans have been curious to know who the 19-year-old actor is dating. Well, is he single? Did he have any girlfriends in the past?

Let’s find out the answer to all the questions.

Who is Joshua Bassett girlfriend in 2021?

The short answer to this query is, Joshua is single and not dating anyone in 2021. However, since December 2020, Joshua has been giving off the ‘in love’ vibes. Yes, the handsome devil might just be in a relationship with someone who we’re sure many of you might know.

On December 22nd, 2020, Bassett released the live version of his son, “Heaven is You.” Upon listening to the song, which we’re sure many of you have done, we can say he is totally head over heels for someone. The lyrics go something like this, “Oh, I always heard there was a heaven/ I never knew if it was true/ But darlin’, ever since I met you/ I know that heaven is you.”

Tabloids and eagle-eye fans are thinking Joshua is talking about the singer, Sabrina Carpenter. They came to this arbitrary conclusion after Joshua and Sabrina shared a joint TikTok video in November of the same year. In the clip, the duo dons the Sharkboy and Lavagirl costumes respectively.

And not just in this video, tabloids have also reported the rumored couple also spent a lot of time together during the 2020 quarantine.

In the music, her lyrics specifically calls out a blonde girl who is also older than her. The lyrics read, “And you’re probably with that blonde girl/ Who always made me doubt/ She’s so much older than me/ She’s everything I’m insecure about.”

But having said that, there is a pretty high chance that all the stuff is nothing but a mere coincidence. And that is understandable as celebrity relationships tend to become subjects of constant gossip and articles in magazines.

Besides, it’s always up to a person if he/she wants to put their love life on the public platform. We hope that Joshua opens up if he happens to be dating a girlfriend at present or in the future.

Joshua Bassett Girlfriend in the past

It seems the 19 years old Stuck in the Middle star is single at present, but what about his past relationships? Did he have girlfriends in the past? Well, Joshua has no history of romantic relationships. There are no records of him having a girlfriend in the past as well, at least no confirmed partner.

His Instagram posts are clean where he seems more in love with his guitar rather than a girl.

Most of his posts feature him strumming his guitar and playing the piano. And to be honest he is an incredible singer.

Not Right Now Written by me

He has over 1.6 million followers on his Instagram, where he goes by the username @joshuatbassett, which clearly reflects his popularity. And needless to mention there are thousands who are crazy about the musical star.

Nevertheless, the actor has been linked with a few people in the past. His chemistry with them has been so intense that fans started speculating he is indeed dating them. Let’s find out about his speculated lovers!

He was once rumored to be dating Olivia Rodrigo: What Is The Truth?

Joshua and Olivia are the lead cast in the Disney+ series High School Musical: The Musical: Series. Because of their chemistry as Ricky Bowen and Nini, two lead characters who fall in love, fans are believing they have something going on in their real-life as well.

In fact, there are many romantic scenes in the series which looked so realistic that viewers became quite curious about their real-life chemistry.

Besides, Olivia has also opened up in many interviews that one of the scenes where Joshua tells Olivia “I love you” was improvised. She also addressed that the scene made her cry. This comment fueled the fans’ speculation about their romance behind the scenes.

Joshua and Rodrigo once addressed each other as Bf and Gf

In one of their interviews, Olivia and Joshua addressed their relationship as boyfriend and girlfriend in the series and said that the best scenes are yet to come.

Similarly, Olivia also addressed saying she enjoyed the processes of working with Joshua and the character she plays. She said,

I think it’s so cool to be able to play this relationship. It mimics a lot of actual high school relationships, like Josh said. That it’s just really fun and working with Josh and Matt [Cornett] has been amazing, and they’re both lovely people. I think Rini stans are really going to want to watch episodes nine and 10, I think they’re really going to love it.

Well, apart from all the on-screen chemistry and speculations about their affair, Olivia and Joshua have clearly mentioned that they are just friends and not dating.

Having said that, possibilities are always there that they might begin dating, and no doubt, we would love to see them as a couple.

Apart from all the speculations about his love life, there is also controversy and hate that Josh has to deal with. In this context, there are many of his fans who think Joshua hates Sofia Wylie, the other cast member of High School Musical: The Musical: Series.

All these began after an old live stream of the cast members resurfaced where Larry Saperstein asked if “being friends with Sofia Wylie is the craziest thing.”

While Olivia Rodrigo answered saying “Literally she’s the best,” Joshua on the other hand merely murmured “sure” in response to Olivia’s comment.

This eventually leads to their fans believing Joshua hates Sofia. However, Bassett has not yet addressed the matter.