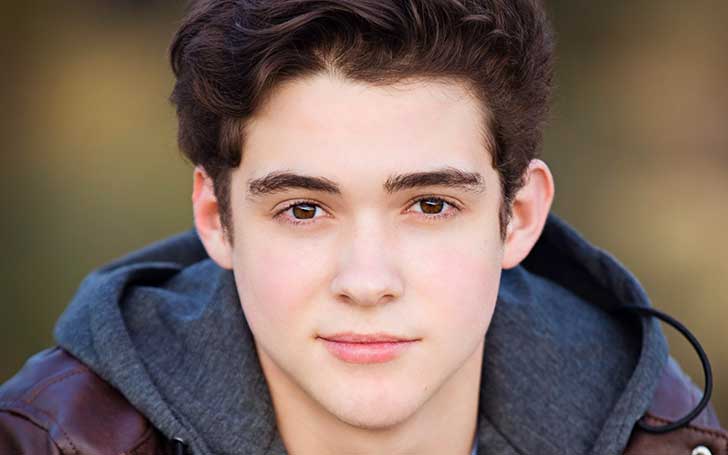 Joshua Bassett was born in Oceanside, California to parents Taylor Bassett and Laura Bassett. He grew up in his hometown with his five siblings, all sisters. His sisters are also involved in theater.

Joined Musical Theater at the Age of Eight

Bassett developed an interest in music and acting at an early age. At just eight, he joined a musical theater and appeared in a community theater production of High School Musical as J.V. Jock No. 2.

By far, he has worked in over 30 musical productions. Besides, Bassett also learned to play piano, guitar, and drums during his teens.

Joshua Bassett’s Career and His Rise to Prominence

Joshua Bassett debuted in his acting career in 2017, appearing as Will in the episode Flight Rist of the drama-comedy series Lethal Weapon. A year later, Bassett made his guest-appearance as Brock in an episode of Game Shakers.

Bassett landed his first major television role in 2018 when he joined the cast of Stuck in the Middle as a recurring character, Aidan Peters. In 2019, Bassett made his appearance in a couple of episodes of Grey’s Anatomy.

Bassett got the most promising role of his career in 2019, as Ricky Bowen in High School Musical: The Musical: The Series.  The mockumentary drama series also features Olivia Rodrigo, Matt Cornett, and Sofia Wylie among others in the main role.

His role in the series won him a nomination for the Favorite Male TV Star at Kids’ Choice Awards.

Besides acting, Joshua Bassett is also a lover of music. He and his High School Musical costar, Olivia wrote Just a Moment for the series’ soundtrack. Meanwhile, Bassett also made his debut as a singer in 2020.

He signed with United Talent Agency, a talent and entertainment company in early 2020. Bassett released his first single, Common Sense on April 3, 2020.

Joshua Bassett’s Net Worth in 2020

The 19-year-old American actor Joshua Bassett has worked in around half a dozen movies and television series in his short career. Besides the tremendous fame he garnered from his career, Bassett has also accumulated a handsome riches as well.

Even though his exact net worth is yet to be revealed, it is estimated at around $500k in 2020.

His Relationships-Who is Joshua Bassett’s Girlfriend in 2020?

The Stuck in the Middle actor is single as of May 2020. Bassett remains relatively secretive about his personal relationships. As per some online sources, the 19-year-old actor hasn’t dated anyone publicly as of yet.

Bassett and his High School Musical co-star Olivia Rodrigo were previously reported to be dating. Their chemistry in the television series made their fans believe that they were dating in real life too. However, the fact is a little different. They are officially not dating as of 2020.

Meanwhile, Olivia had fueled their romance rumor after she revealed Joshua’s confession of his love to her in the series was improvised by the actor himself. Furthermore, Rodrigo said she herself got emotional while doing the scene.