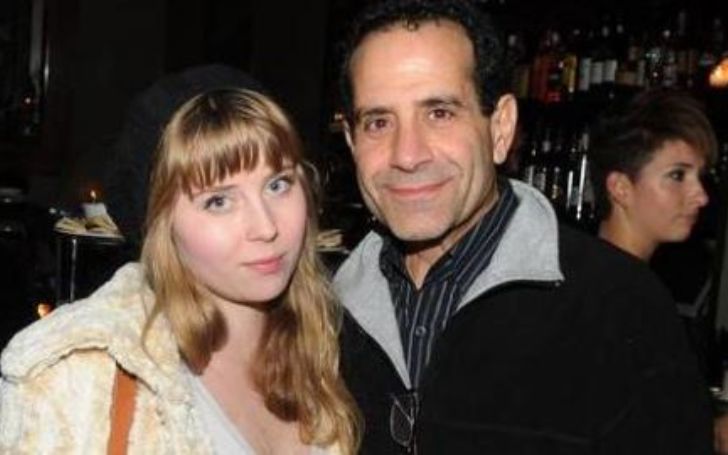 Josie Lynn Shalhoub is an essayist, story writer, and food writer whose pieces have appeared in McSweeney’s, Audible, and Bon Appétit. She is better known as the daughter of actor Tony Shalhoub, known for playing Adrian Monk in the series Monk, Antonio Scarpacci in the NBC sitcom Wings, and Abe Weissman on Amazon’s The Marvelous Mrs. Maisel.

Josie is also related to another Hollywood star, Brooke Adams, her mother who is best known for her film roles in Days of Heaven (1978), Invasion of the Body Snatchers (1978), and The Dead Zone (1983).

Tony and Brooke’s daughter, Josie who is now a mother, herself, is quite a reputed writer on her own. It, however, turns out, she has a handful of stories from her own life before she even stepped into adulthood. Read about them all in the writings below; starting with how she came to be the daughter of Tony and Brooke, her own marital life, career, and more.

The eldest daughter of Tony and his wife Josie Lynn Shalhoub was born in November 1988 in Omaha Nebraska. Josie who is currently 33 years old grew up with her sister Sophie Shalhoub in Chilmark, Massachusetts.

Josie apparently has quite a lot to tell from her academic resume.

For starters, she attended Yale Writer’s Workshop and Fairleigh Dickinson University. Shalhoub also studied Bachelor of Fine Arts in theater from CalArts, a private university in California. She likewise holds a culinary degree from the French Culinary Institute and Institute of Culinary Education.

The Blonde-Nebraska-native’s essays, stories, and food writing such as Home and The Tea Shoppe have appeared in McSweeney’s, Audible, and Bon Appetite magazine.

Josie has also written a handful of non-fiction articles where she has confessed and talked about a range of emotions she went through during the pandemic 2020.

Most of her fiction is about a mixture of love, fear of losing your beloved ones, and gratitude towards life. Her essays, stories, and food writing have appeared in McSweeney’s, Audible, NZ Herald, and Bon Appétit.

Is Josie Lynn Shalhoub The Biological Daughter Of Tony Shalhoub?

Josie, in real, is the adoptive child of Brooke and her husband Tony. Though there’s more to it.

Josie first was only the adopted daughter of Brooke. In an interview Brooke said she didn’t want to marry but, always knew she wanted to be a mother and so she took Josie as her daughter. She was adopted at birth from Omaha, Nebraska, and raised partly in Los Angeles.

While wishing her daughter for her marriage in Dec 2016, Brooke revealed Josie was a very easy baby and toddler; cheerful, social, and just the cutest thing she’d ever seen.

She apparently was also well behaved and made Brooke look like a really good mother. Josie’s sister Sophie Shalhoub is also the adopted daughter of the Spy Kids actor and his wife Brooke. Though Sophie became a member of the Shalhoub family only after the marriage of Brooke and Tony.

Josie’s Relationship With Her Parents And Sibling

While Jodie is not that active on social media, she occasionally drops some pictures of her family with some words alongside thereby flaunting how appreciative she is of their bond.

Josie has a great relationship with her sister Sophie Shalhoub as well.

Josie played a significant role to form a relationship between her parents, Tony and Brooke. Tony, a Lebanese Maronite Christian by religion, met Brooke in 1988 when he was doing the play The Heidi Chronicles on Broadway.

And Jodie found Tony adorable from the day she met him and would always walk through the stairs calling him “Nony! Nony are you there?”

She apparently would jump out of her mother’s arms and run straight into his. Adams said her then-3-year-old had picked the “Monk” alum as her dad way before he started dating her.

Although Tony and Brooke also liked each other from the beginning, the duo parted ways at the end of the play The Heidi Chronicles as Tony had a girlfriend back then. They then didn’t meet each other for about two years.

Brooke and Tony began dating only after their second meeting in 1990. It began when Brooke sent a letter of condolence following the death of Tony’s father. The Wings actor Tony had a crush on Adams, which developed from watching her and Richard Gere play migrant farmworkers in “Days of Heaven” years earlier.

Josie’s parents dated for a few months and at the time, Adams had gotten the national tour of “Lost in Yonkers,” and he was doing “Wings.” Shalhoub proposed to Josie’s mother two months after their first date and they eventually married each other in April 1992.

Adams said she and the Paulie, The Siege star married at an old stone cottage overlooking the Hudson in a town called Sneden’s Landing that was 45 minutes from Times Square.

The eldest daughter of Tony and Brooke, Josie is married to a guy named Traver. She married him in Aug 2015. The two had a rather private wedding ceremony in front of their family members and friends.

Josie’s mother, Brooke once revealed her daughter had always expected and wanted to get married. She said Josie’s preschool teacher had told her that she was a relationship genius. Josie apparently knew how to get her way without making any of the other kids angry.

Adams believes her aforesaid ability will serve her well in marriage to Traver who she thinks is an excellent choice for her daughter. Traver and Jodie now also have a son named Tucker Anthony Tischio who was born in June of 2020. Jodie along with her husband and son live in New Jersey.

How Did Josie Meet Her Husband?

Right when Jodie met her current husband, Traver, she had just split up with her boyfriend from a 4-year relationship and had thought of remaining single for a while. That changed when she met Traver on the trip to New York.

After the first meeting, they walked around West Village and talked about kids, family, religion, and books on their first date. However, due to her work life, Josie had to head back to LA.

Although she had already fallen for Traver, she wasn’t sure to give it a go. The two, nonetheless, eventually started dating. Not long after, Traver proposed to Tony and Brooke’s eldest daughter just before Thanksgiving 2016 and now the couple are the parents of one son.

The writer’s father, Tony Shalhoub is estimated to have a net worth of over $30million. And considering his appearances in over 30 shows and more than 70 films that is hardly surprising. Josie and Sophie’s father has been in the show biz since the 80s and is still one of the busiest actors with all his TVs, voice-over, and big-screen projects.

What’s more, Tony is still taking big payouts with his ongoing hit series The Marvelous Mrs. Maisel; the now 68-year-old reportedly commands over $250,000 per episode, according to a 2019 Variety report while the show lead Rachel Brosnahan earning around $300,000 per episode.

Brooke’s daughter Josie Lynn is on Instagram and Twitter albeit moderately active. She is under the username@josielynneadams and Josie Adams respectively.

Most of her Insta feeds are about her husband and son; there also lie some images from her wedding.