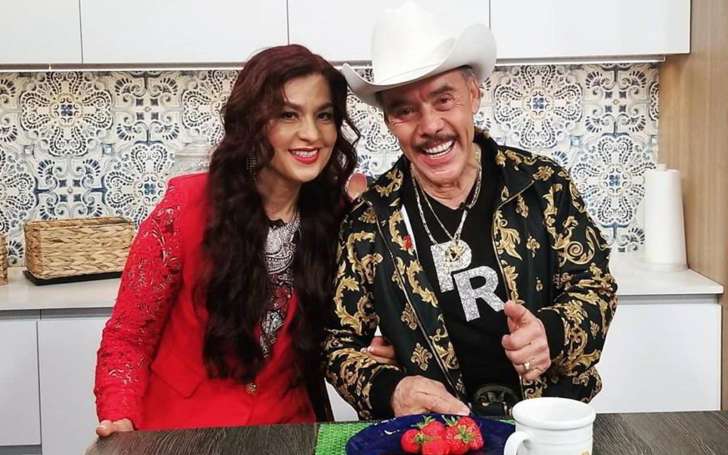 If you’re a fan of the Mexican music genre then the name Juana Ahumada probably rings a bell. Yes, she is the much younger wife of the Rivera family patriarch, Pedro Rivera.

Before she became his wife, she used to work as his personal assistant. It has been said that Pedro and Juana started their love affair while he was still in a relationship with his first wife, Rosa Saavedra.

Today in this article, we’re going to find out some interesting facts about Pedro Rivera’s wife, Juana. Let’s get right into it!

Juana Ahumada Early Life: Is she a Mexican or an American?

Ever since Juana married Don Pedro, fans of the Latin music industry have been doing quite a lot of buzzing. Many of them are curious to know whether Juana is an American or a Mexican.

Well, to start off, Juana is indeed an American, born and raised. She, however, belongs to the Mexican ethnicity and was raised in a tight-knit household. There’s not much information available about Juana’s parents or siblings.

On the other hand, her husband Pedro also comes from Mexican ethnicity and was born and raised in Mexico. He came to the US at a fairly young age and eventually settled in Long Beach, California.

Unlike her husband Pedro who has gained international fame among the Mexican music fanatics, Juana isn’t that famous for her career. She only gained fame after she started working for Pedro as his personal assistant. At the time of their wedding in 2019, she had been his assistant for eight years.

Apart from her work as the assistant for Pedro, there’s no information about her previous works. She was working for Pedro for a long time and now they are a married couple. As a matter of fact, she still serves as his personal assistant.

When did Juana and Pedro marry?

The lovebirds exchanged vows in a secret ceremony in 2019. The nuptials took place in Huntington Park, California. According to reports, the only person at their wedding besides the bride and the groom was the officiator.

At the time when they got married, not many knew about it. It was only a couple of months after when the news came out. While appearing on the Un Nuevo Dia Program, Pedro announced that he had been married to Juana for a couple of months.

Although it was great news for many, a few fans criticized Pedro. While some haters said that Pedro and his family always make a fool of themselves while others said the marriage is nothing but a big joke.

Despite all the backlash, Pedro and Juana are relishing their married life. The singer usually shares pictures of his wife on his Instagram account displaying his love for her.

Pedro Rivera was once married before: What about Juana Ahumada?

Before tying the knot with Juana, Pedro was married to Rosa Saavedra. The former pair exchanged vows in the year 1963. Soon after marrying, the pair moved to Long Beach, California, and stayed there for the rest of their lives.

Their relationship survived the test of time and they remained together for around four decades. However, as all good things come to an end, their marital bliss also came to an end.

Around the mid-2000s, Pedro got himself involved in a string of extra-marital affairs. Eventually, their marriage came to an end in the year 2008.

On the other hand, Juana was not married to anyone. This is the first marriage for her.

Juana Ahumada is the step-mother to Pedro Rose Children

From his marriage to Rose, Pedro became a father of six children, four sons, and two daughters. And after marrying Pedro, Juana somehow became the stepmother of her hubby’s brood.