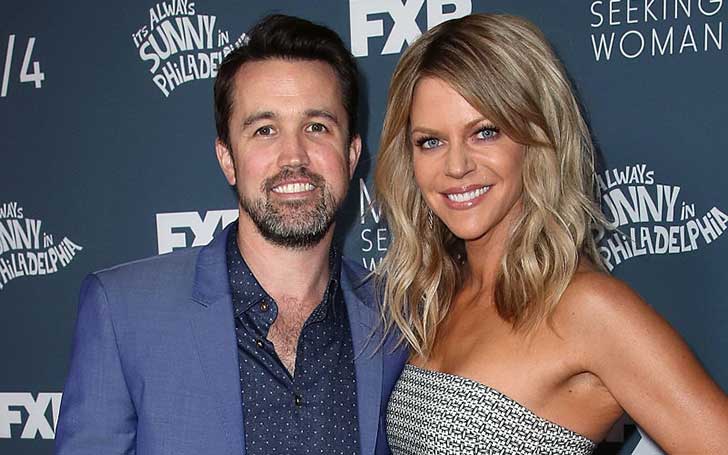 There are very few Hollywood stars who have maintained both their professional and personal life well. And Kaitlin Olson and her husband Rob McElhenney are one of the ideal couples. The 44-year-old It’s Always Sunny in Philadelphia star is happily married for over a decade while she has cherished an acting career for over two decades.

Even though Olson’s relationship with her husband Rob McElhenney is quite evident, there still is a lot of stuff to talk about it. Here, we’re giving a detailed view of how the pair fell in love and how they cherished their intimacy.

Besides their beautiful wedding, the duo also share kids together. Stay with us and find all the details about their love life.

Kaitlin Olson and Rob McElhenney met on the set of It’s Always Sunny in Philadelphia in the mid-2000s. But, lots of things went by before the current husband-and-wife came across. Rob had called Olson up for the role of Sweet Dee in the replacement of actress Jordan Reid.

As a matter of fact, Rob was dating actress Reid at the time they shot the pilot of Sunny. Rob and Ried went on to part their ways before they started shooting for the series. Due to the failed relationship, Rob and two other stars of the series, Glenn and Charlie cut her off the show.

In a conversation with her longtime friend Dax Shepherd, Olson revealed that she fell in love with Rob’s personality. She added that she made a move on him at a Fox party. Even though she wasn’t clear how their romance sparked, she revealed it started after she along with other co-stars went on game night.

“I kind of backed up in between his legs, and moved myself into his lap, and he was like, ‘What are you doing?’ That’s the other thing about Rob. He’s very direct. He’s honest to a fault.”

Since then, the lovebirds started their romance. Kaitlin said she was madly in love with Rob since the beginning, however, it took him a while to realize.

Did Kaitlin Undergo Cosmetic surgery in 2018, The Truth Here

Rob Was Living with Another Castmate While He Started Dating Olson

At the time Rob McElhenney and Kaitlin Olson started dating, the former was living with another It’s Always Sunny in Philadelphia co-star, Glenn Howerton. Rob kept his roomie unaware of the fact that he was going out with Olson.

Olson told Dax Shepherd during a podcast that she and Rob dated secretly for months and Glenn had no idea about them. She said Glenn would always come to work jealous. Olson recalled Glenn used to complain about his roommate as:

“God, Rob is just like, he’s just out there at bars, just like, meeting people? F***ing every bar he goes to, he goes and spends the night at her house!”

Starting in 2006, during the second season of Always Sunny, Olson and her boyfriend turned husband Rob dated for a couple of years before Rob proposed her to be his wife.

Months later, on September 27, 2008, Olson and Rob walked down the aisle in Malibu, California. The couple has lived one decade of their conjugal life happily. Besides, Olson and McElhenney are blessed with two children, sons, Axel Lee McElhenney and Leo Grey McElhenney.

Olson Went Into Labor During a Baseball Match

Kaitlin Olson and her spouse gave birth to their first child, Axel on September 1, 2010. As per the reports, actress Olson went into labor while they were watching a baseball match between Philadelphia Phillies and Los Angeles Dodgers.

Talking to Glamour, Olson said she had gone into labor at home, however, she and her husband went to watch the game thinking she had time. Olson said she thought, “Oh, it’s gonna be a long time [till the baby is ready to come out], and it’s my first baby.”

Talking to Glamour magazine, actress Olson opened up about her nearly fatal bike accident she met in her childhood. There she said, she had a bike accident at the age of 12 that left her with a fractured skull and a hole in her head. After the accident, Olson also underwent facial reconstructive surgery.

Olson’s childhood nightmare has made her a slightly over-conscious mother. She still fears her kids might have to go through the same painful situation. So, she tries to teach her children to take care of themselves. “I’m really trying to teach my kids to look around and figure out what to do to keep yourself safe and then go for it,” said Kaitlin.

Like Olson, her husband Rob McElhenney is also an actor and is pretty successful in her profession. Beginning his career with a small part in the 1997 film The Devil’s Own, McElhenney has come a long way as an actor.

He has appeared in both movies and TV series which are both financially and critically successful. Some of his works A Civil Action, Latter Days, Law & Order, Unsupervised, The Mindy Project, and so on.

But besides, all these, he is primarily known for his works in It’s Always Sunny in Philadelphia, and currently as Ian in Mythic Quest: Raven’s Banquet.

The Truth About Kaitlin Olson’s Plastic Surgery: Her Before & After Pic