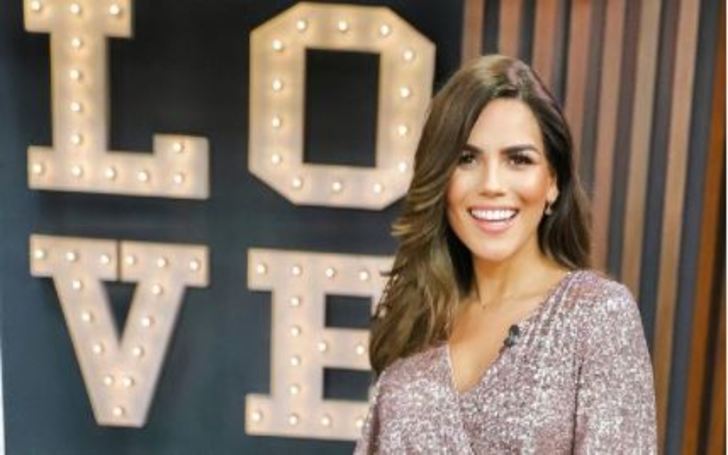 Karina Banda is a six-time Emmy-winning MX Journalist, TV host, and reporter. She is also known as the wife of a Puerto Rican actor, Carlos Ponce.

Banda is famous as the host of Enamorándonos (Falling In Love), a Latinx reality dating show which serves as a matchmaker. Karina is a very notable face in the Mexican TV world with multiple accolades to her name.

Her professional achievements are quite exemplary but, is her personal life that joyous? Who is she married to? Does she have any children? Know all these and much beyond in the details to follow.

Karina Banda Has Been In The Journalism Since 13

Banda was born on Aug 21, 1988, in Salamanca, Guanajuato, Mexico to a working-class family. The journalist, however, grew up mostly but in Monterrey, Nuevo León. She studied at The Angels High School.

The Hispanic celebrity has always claimed to have had a happy childhood and all the support of her parents. She believes she owes her folks for her university preparation. Though in interviews she has indicated that she has already paid off that debt to her parents.

She started her journalism career when she was 13 years old. Ms. Ponce says she knew that she wanted to be a communicator and helped out on the radio from a very young age.

In 2005, she enrolled in La Autónoma de Nuevo León, a public university in Mexico to study journalism. She also studied at the University of Texas at Austin for a year and two years later attended Consultoria y Servicios Monterrey, a monetary consulting service.

Banda admits to being a bully victim as a child because of the size of her ears.

Banda Has Been The Host Of Regional And International Shows

Banda’s passion for her performing arts brought her to the United States. Prior to she was the host of the Televisa newscast in Monterrey. She was a reporter in ´El Gordo y La Flaca.´

After moving to the states, she started working at the Univision local in Sacramento, and next she was signed by the national network. While in California, she studied acting at Tvi Actors Studio. Banda then relocated to Miami.

In June 2021, Karina Banda replaced Anna Patricia On Falling In Love, a reality show from the network, Univision.

Additionally, she is a part of the Sal y Pimienta team and also collaborates with the renowned program of El Gordo y la Flaca and TUDN.

People Criticized Karina Banda After Her Brother Participated In Enamorándonos

In September 2021, Banda received several criticisms when her brother, Edson Banda participated as one of the hosts on Enamorándonos.

The caustic response especially came after the reporter’s brother rejected the dancer Mariale Jaramillo, with whom he had good communication and even reflected some chemistry. After that, his sister Karina fired back in support of her brother over on social networks.

Among the comments, some said Karina to not get involved in her brother’s relationships. But Ms. Ponce replied saying honesty should be one of the most valuable things a human being can receive. She reasoned her brother being truthful in denying Mariale was rather needed.

Karina Banda in 2016 portrayed the real-life character of Margarita in the famous Telemundo show, Case Closed by the director, Ana Maria Polo.

In this series which focuses on resolving the legal battles of the attendees, Banda played a married woman who cheated on her husband with her gym coach and was also bigamy, not to mention that the daughter she had was not from her marriage.

Karina Banda Is Married To A Puerto Rican Actor

Banda married her actor husband, Ponce on July 30, 2020, in Florida. The couple had a civil union that took place practically without guests (only the actor’s twin daughters from a previous relationship) and in the deepest secrecy.

The host and the actor are also planning to have a traditional wedding with guests and families once the covid 19 debacle is over.

The couple began their relationship on February 14, 2018, with their first date on May 28 of that year. It was the Cuban American model, Lilli Estefan who had introduced the future husband and wife.

They, however, broke up briefly in 2019 before patching things up once again in September, the same year. Ponce asked Banda to marry him in January 2020.

Karina once revealed that it was the actor’s good sense of humor that made her fall for him. Enamorándonos’ host, however, acknowledged that there are times when she has to say sorry to others when her husband wants to “laugh” at everything.

The couple resides in Miami.

Banda’s spouse, Carlos Ponce is known for acting in several Spanish and English language series as well films. He is also a singer. Some of his notable roles include Salvadore in Couples Retreat, Matthew Wright in Spy, and Rodrigo in Deuce Bigalow: European Gigolo.

In addition, Karina’s husband, Ponce is one of the protagonists of the Netflix series, “Las Juanas.” In the 2021 thriller series, the reporter’s partner plays the father of five female leads portrayed by actresses Zuria Vega, Oka Giner, Juana Arias, Sofia Engberg, and Renata Notni.

Karina Has A Great Relationship With Her Stepchildren

Although she doesn’t have children of her own, Banda is extremely close with her husband’s four kids from his ex-wife (Veronica Rubio), especially with his twin girls. Her stepchildren are Giancarlo, Sebastián, and the twins, Savannah and Sienna.

Weeks after her wedding to Ponce, Sienna, one of her husband’s twin daughters, suffered a mental health crisis.

The host revealed the moments were something that she wished could suffer for herself only. She explained her stepdaughter nonetheless being strong, intelligent, and admirable.

The five-foot-six inches tall reporter assured that Sienna has since been more stable.

Karina Was Once Married To An American Pilot

Before marrying Ponce, the Univision presenter was the wife of an American helicopter pilot, Douglas Rigg. She had gotten engaged to him in 2015. The former couple had their wedding in March 2016 at San Miguel de Allende in the state of Guanajuato, Mexico.

The marriage though lasted only for a few months.

There’s still that lingering suspicion with respect to Karina’s economic standings. It, however, should go without saying that she is easily among the highest earners in the reporting domain. The majority of conjectures have long been recognizing her as the host with big cheques with her career earnings seemingly grossing beyond millions of dollars.

She is also speculated to cash in from her blogging gigs.
Not to mention there are also those rolls of beauty products that she commercially advocates for through her socials.

One could easily have the roughest estimation regarding her financial success by a few looks at her exotic and lavished social media lifestyle.

Who Is April Kimble? Inside The Life Of Lyle Lovett’s Wife