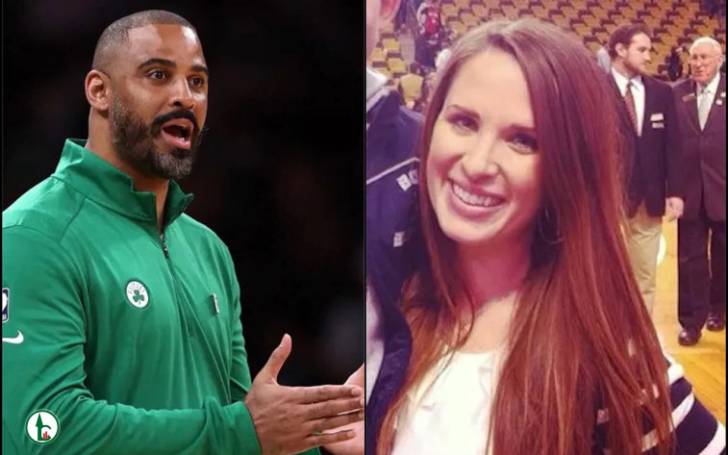 Kathleen Lynch is a staff member of the Boston Celtics. She came into the limelight after her name got linked with the Nigerian-American basketball head coach for the Boston Celtics of the NBA Ime Udoka (aka Ime Sunday Udoka). The two, Kathleen and Udoka are alleged to have a romantic relationship despite having their own family.

Besides all these allegations, Kathleen is a married woman. She has been a wife to her husband Taylor James Lynch for nearly a decade. Well, being in such a long marital life, does she share children with her husband? Today, let’s find out all the personal and professional details on the alleged lover of Ime Udoka, Kathleen Lynch.

In addition, we will also explore the detail of Kathleen and Udoka’s alleged love affair. Are the allegations true? Let’s get started.

Who Is Kathleen Lynch Of The Boston Celtics? Her Early Life Details

As said earlier, Kathleen is the Boston Celtics’ former head coach Ime Udoka’s alleged lover. Talking about her early life, Kathleen was born ‘Kathleen Nimmo Lynch’  in June 1988 in Bedford, New Hampshire, the United States. As of 2023, she is 34 years of age.

Similarly, she grew up in a Mormon family and spent most of her teenage years in Wellesley, Massachusetts before leaving for Utah for her study. As for education, Kathleen is a 2006 graduate of Wellesley High School. Later, she attended Brigham Young University in Provo, Utah.

Besides, in regard to ethnicity, she belongs to the white race and is an American national. She is a devout Mormon.

On September 2022, Udoka having an “intimate and consensual relationship” with the female staff of the Boston Celtics was reported by The Athletic. Following the reports, the Celtics team started investigating and found out that the news about Udoka’s affair was true. As a result, citing the violation of the team’s policies, Ime was suspended for the 2022-23 season.

Also, Read: What is Honeysuckle Weeks doing now? Untold Facts about her

Amidst all these scandals, the identity of the female staff was kept secret but not for too long. In the following month of October, Kathleen’s name as Udoka’s secret lover came out in the media.

With regard to the allegation, the close source of the investigation team revealed,

the affair was consensual, short lived, and had ended by the time investigators got involved

At present, Lynch is out of contact with the media and is unreachable to anyone who wants to reach out to her.

Kathleen’s Lover Ime Udoka Suspended By The Team; Did The Celtics Team Suspend Kathleen As Well?

Right after the Boston Celtics found Udoka guilty of violating the team’s policy, they decided to suspend him in September, just a week before the 2022-23 NBA season. After getting the suspension letter, Ime gave his statement which said,

“I want to apologize to our players, fans, the entire Celtics organization, and my family for letting them down, “I am sorry for putting the team in this difficult situation, and I accept the team’s decision.”

“Out of respect for everyone involved, I will have no further comment.”

On the other hand, Kathleen whose name is involved with the coach has not given any statement regarding this. Also, the team has not taken any disciplinary action against Kathleen yet.

How Is Lynch’s Condition After Her Name With Udoka Leaked?

After Lynch and Udoka’s extra-marital relationship surfaced in the media, Kathleen is reported to have been devastated and feeling guilty. Lynch’s close source told,

‘She’s been left devastated and afraid to show her face in public these days, wanting to avoid scrutiny given her name and photo have circulated widely.’

‘She can’t even go to a grocery store,’

Seeing this, we can say that she is probably going through some mental breakdown in the midst of all these revelations or let’s say allegations. On the other hand, following the divulgence of their illegitimate relationship, Udoka broke up with his partner, Nia Long with whom he was in a relationship for 13 years. In case you don’t know, the head coach shares a son with her longtime partner Nia.

Was Kathleen Really In An Extra-Marital Affair With Udoka?

To date, several sources have confirmed that the lady with whom the Celtics head coach was having an affair was Kathleen. There are also reports that Udoka was involved with two Celtics female staff and Nimmo-Lynch is one of them.

Among the two, Daily Mail mentioned Kathleen’s name and claimed that she was in a consensual relationship with Udoka. In addition, a close source of Kathleen’s family said to the publication,

“I know the whole story front and back,’ It’s as basic as can get. All the acts were 100 percent consensual.”

Depending on this statement, it can be said that the Celtics staff Kathleen had an extra-marital affair with coach Udoka.

In a shocking turn of events, it was Kathleen’s long-term spouse Taylor who reportedly snitched to Boston Celtics about what had been going on between his wife and Ime Udoka as per the headlines made by Black sports online. However, since the scandal surfaced in the online portal, Lynch’s husband hasn’t faced the media yet.

Kathleen Lynch Joined The Boston Celtics Thanks To Danny Ainge

Before her involvement with the head coach Udoka leaked in the media in September 2022, Kathleen was serving in the position of team service manager at Boston Celtics. Since 2013, she was working for the team. Apparently, it was Celtics legend, Danny who helped her get the job at his former team.

Likewise, her work was to arrange travel for the team as well as their family member. She used to look after every lodging and game ticket for Celtic members. Lately, after her name came out, she is not involved as a staffer at the Celtics and amidst all these claims, Lynch has reportedly deleted her LinkedIn account as well.

Kathleen Lynch Is A Married Woman; Who Is Her Husband?

Kathleen is married to her husband Taylor James Lynch, a California native. The couple tied the knot on September 6, 2014, as per her husband’s Facebook account. Talking about her husband’s career, he is a former Analyst at whipstitch Capital. Further, James also worked as a former summer camp assistant director at the YMCA Of Silicon Valley.

Now, coming back to their marital life, the pair has been husband-wife for 8 years. Recently, before the cheating scandal resurfaced, both of them were on great terms which can be known through the post that Taylor uploaded on his Facebook on the occasion of mother’s day. On May 8, 2022, Lynch’s better half wrote,

I know I tease and make fun of her a lot, but deep down I do love and admire her. She holds a million titles, but none more amazing to watch than “Mom”.

She may think of herself as a glorified “snack bitch”, but the rest of us are aware how hard she works for everyone around her, especially her babies. Happy Mother’s Day @kathnimmolynch – keep up the good work know we love you

The husband-wife duo shared a beautiful relationship together for almost a decade. But, after Lynch’s name got involved in the scandal, we assume that there is a maximum possibility that their relationship will take a new turn, either positively with mutual understanding or in a negative way.

Lynch Is a Mother Of Three

In her nearly decade-long marital life with her husband Taylor, she welcomed three children. At the moment, her baby’s exact birth figure is unknown. However, we have found out some details about her children. Lynch is the mother of two beautiful daughters Emma and Allie, and a son Tay.

Kathleen welcomed her first-born child in 2015. Likewise, her second daughter arrived in February 2016 as per her husband’s social media account. Similarly, her younger son Tay was born in August 2019. Counting on this, both her daughter are above 5 as of 2023 while her son is currently 3 years old.

Now that there’s this scandal haunting the Lynch family, it is likely that Kathleen and her husband Taylor will definitely go their separate ways. A tragic ending to such a family.

The Bedford native is active on Instagram with 561 followers but has kept it private. Further, she is also on Facebook with 1.1k friends. On her Facebook, she has mostly shared her personal moments with her husband, family, and friends.

After the affair scandal, she has also been featured in TikTok.

The Celtics’ female staff Kathleen is reported to have an estimated net worth of $653,000. No doubt, she earned the money from her career as a Team Service manager at Boston Celtics. On the other hand, her alleged lover NBA coach Ime Udoka has a fortune of $6 million.