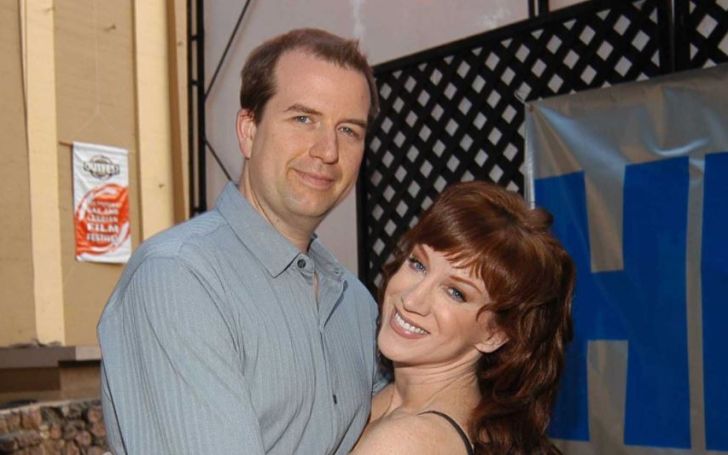 Matt Moline was leading a very simple life before he bumped into Kathy Griffin. Ever since he married her, the twosome became a talk of the town. Although the pair is no longer together, people are still curious about Kathy’s husband Matt.

The part which intrigues many of us is how did their relationship come to fruition? After all, both of them came from different fields, Matt from IT while Kathy is a comedian.

Well, let’s dive straight in and find interesting facts about Matt. In addition, we will also find if the man has exchanged vows again or not?

Who is Matt Moline? A look at his life

Born on December 18th, 1970, in Washington, District of Columbia, the USA Matthew Hall Moline came to media prominence ever since he started dating Kathy. Before all the fame, he was living a rather simple life.

While growing up, he never stayed in one place for a long time. He and his family moved around quite a lot until Matt’s late teens. There’s not a whole lot of information about his parents but we do know about his sister, Rebecca Moline.

Matt belongs to the Swedish ethnicity. His great-great-grandfather Anders Nelson and his wife Anna Nelson migrated from Sweden to New York before moving to the state of Kansas. They changed their surname to Moline because of the postman who used to mix up the postal with a neighbor with the same surname.

Matt’s sister is a film producer

Rebecca Moline, unlike her brother, traversed into the field of cinema. She is a film editor having been worked in several TV series as a producer. Her most famous credits include The Good Doctor, Outsiders, Manhattan, Bad Teacher, and Franklin & Bash.

Talking about her personal life, Rebecca belongs to the LGBT community. At the time when her brother Matt was still married to Kathy, she used to hang out with the comedian a lot.

Matt and Kathy started dating around the time when Kathy had become a prominent name in the industry. After dating for some time the pair decided to up the ante and decided to marry.

They exchanged vows on February 18th, 2001, in an extravagant ceremony. Many of their friends and family were in attendance. For the wedding dress, Matt went for a black suit with a white shirt and tie, while his bride stunned in a white gown.

Leading up to the wedding: Matt fell in love with Kathy at first glance

At the beginning of their relationship, there wasn’t much to discuss. However, after Bravo TV’s show launched the show, My Life on the D-List, a lot of intriguing facts came out. The comedy series which ran from 2005 to 2010 followed Kathy’s attempt on staying relevant despite having low celebrity status, pun intended!

In the show, Matt revealed that he fell in love with the comedian the moment he first saw her. He said, “I was totally into her from the moment I saw her. She’s the most fearless person I’ve ever met.”

Likewise, Kathy also believed Matt changed her love life. In the show, she mentioned how her dating life was a mess. She dated all kinds of people, midgets, nomads, bisexuals, you name it. But when Moline entered her life, it all changed. She says in the show, “I had kind of given up when I met [Moline].”

Moreover, Griffin knew he was the one right when they started dating. In a column written by herself for the August 2005 issue of Glamour, she wrote,

“The first night he came over, he fixed my computer — how nice is that? — and he was smart and funny as well. More important, he was into me from day one. He didn’t do that thing Bad Boys do, where they pull away for no apparent reason.”

Everything was going exceptionally well for the pair until problems started arising. Initially, the Illinois native filed for divorce in September 2005, citing irreconcilable differences. In her petition she also requested to deny spousal support to Matt and that their assets be divided.

Despite filing for separation, Matt and Kathy decided to give their relationship another shot. Subsequently, they reconciled only to separate later, and this time for good. Their divorce finalized in 2006. They didn’t share any children between them.

The reason behind their divorce: She accused him of stealing

During her interview with Larry King, Griffin openly talked about what led to the demise of her marital relationship with Moline. Apparently, their romance fell apart after she discovered Matt had been stealing from her. He reportedly used to take her ATM card and withdraw money. He had stolen $72,000 from her.

Take a look at the interview!

Upon finding out, Griffin confronted him. Matt eventually admitted his mistake and asked for forgiveness. The trust issue had scarred their relationship because of which they even to a couple’s therapy.

Nonetheless, no matter how hard they tried, this very incident killed their love. “Unfortunately, we (were not) able to get beyond the trust issue,” said Griffin.

Some times after the bombshell interview, Matt responded to the accusations. He said, at the time, “I have not made any public comments about my ex-wife or our marriage. It saddens me that she would choose to make such accusations at this time. I have no intention of engaging in a public debate over private matters.”

Where is Matt Moline today? He is an IT specialist

Since 2017, Matt has been working as the Executive director of the Information Technology department for the University of St. Augustine for Health Sciences. Before his current work, he has been involved in several other companies.

Being an IT specialist, Matt worked in high technical positions for a number of companies. From 2007 to 2010 he was the Manager of Information System and Support for Autism Speaks. He also had the role of Chief Information Officer at QuantX Technology Private limited. While he was still living with Kathy, he also operated an IT consulting firm, Moline Systems.

Speaking of his educational background, he finished his Bachelor’s in Economics and Philosophy from Columbia University in the city of New York. Afterwards, he graduated with a degree in Business Administration from New York University.

Matt tried his hands in showbiz

Talking about his personal life, he isn’t active on social media. He remains outside the media shadow. As for his ex-wife, well, she married once again. Since January 1st, 2020, she is married to Randy Bick.

How much is Matt Moline net worth?

Being involved in one of the most profitable fields, Matt is surely raking in millions of dollars. As of now, his net worth is around $2 million.

On the other hand, his wife Kathy is worth a whopping $35 million.