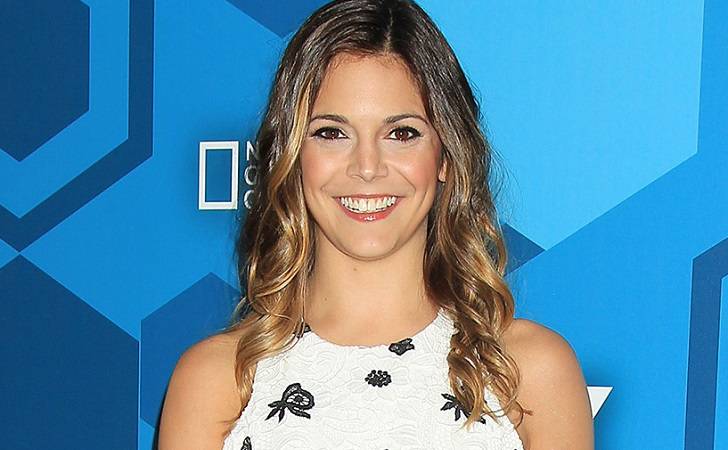 Nolan was born on January 28, 1987, in Boston, Massachusetts to American parents. She grew up along with her sibling, a brother named Kevin Nolan.

Katie was a competitive rhythmic gymnast who won the gold medal in the sport during the 1997 Junior Olympics at the mere age of 10. She is also a die-hard Boston Red Sox fan.

Growing up, both of her parents used to watch Baseball a lot. Maybe this is why Katie too found a passion for sports. During her interview with Jimmy Kimmel, she talked about how both her mom and dad had different sets of beliefs while they watched the game.

She said, “My dad is the kind who, when the team does poorly one time, is immediately like, ‘Eh, Red Sox are done this season.”

Katie further explained about her mom and stated, “She’s very superstitious,” Nolan said. “She made me watch an entire game in the bathroom once because I was in the bathroom when Big Papi made a home run, and therefore, if I were to leave the bathroom we would lose.”

Safe to say, Katie Nolan’s parents are just as crazy as yours.

Besides, talking about her education, Nolan completed her graduation from Framingham High School in 2005. She later enrolled at Hofstra University and obtained a Bachelor of Arts in Public Relations with a minor in Dance in 2009.

Journalism Career, including Prime Role as a Host On ‘ESPN’

Katie Nolan embarked on a media career while bartending in Boston. She created a blog called Bitches Can’t Hang that focused predominantly on pop culture and news topics.

Around the same time, Nolan joined Guyism, part of the Fox Sports Yardbarker network. Subsequently, she began producing and hosting The Guyism Speed Round, a daily video series.

In August 2013, Katie was designated as a digital correspondent for Crowd Goes Wild, a sports/entertainment talk show on Fox Sports 1.

The popular media personality gained critical acclaim after hosting Fox Sports 1’s Garbage Time with Katie Nolan, and a podcast of the same name. The show also won a Sports Emmy for Outstanding Social TV Experience. In Sep 2017, Nola left Fox Sports and joined ESPN in the following month of the year. Her first appearance with ESPN came as a guest panelist on ESPN’s Highly Questionable, a daily sports talk television program on October 19, 2017.

A month later, Nolan became the host of SportsCenter on Snapchat. In Sep 2018, the journalist was promoted as the host of weekly ESPN podcasts, Sports? with Katie Nolan.

Katie Nolan, 34, appeared in three episodes of Drunk History, a Comedy Central program. She narrated the story of Gloria Steinem, a feminist and social-political activist on February 13, 2018.

In addition, Nolan likewise runs a self-titled Youtube Channel which has amassed +75k subscribers as of 2023. She also holds the Guinness Book of World Record for most donuts stacked in a tower within a minute while blindfolded.

Who is Katie Nolan’s Husband?

Katie is not married yet, neither does have a hubby. But, the journalist is now dating Billions star and comedian, Dan Soder as of 2023. The famed sports personality had been quite confidential about her love life and relationships up until May 2020 when Page Six officially revealed that she has a boyfriend.

What’s more, she and Dan have also gotten engaged. Nolan revealed the big and suprising news during her appearance on “The GoJo Show” with Mike Golic Jr. When the host quipped her about “that thing” Katie didn’t say a word but rather showed her fingers where the engagement ring was clearly visible.

Back in 2012, Nolan was rumored to be dating her alleged boyfriend Kevin Connolly, an actor. Later on, it turned out to be a hoax.

Katie Nolan Net Worth And Salary