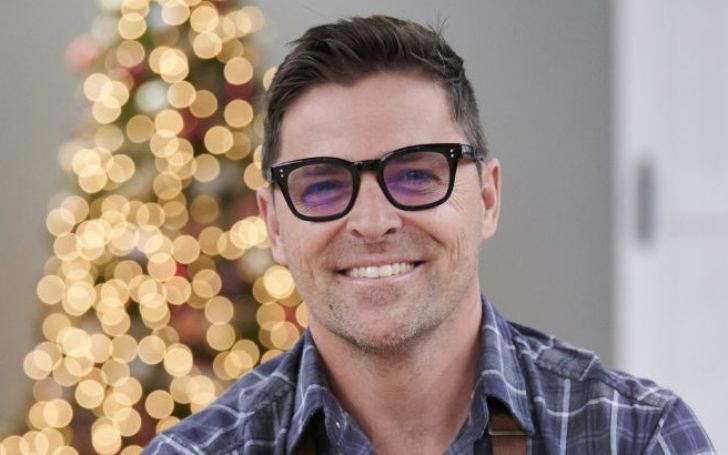 Canadian actor Kavan Smith is known for his work in When Calls the Heart and Stargate Atlantis. Besides, the actor was raised by his single dad.

Here’s everything you need to know about Kavan including his parents, brother, and net worth.

Kavan Smith Family: Raised by a Single Dad in Calgary

Kavan was raised by his father alone as his mom, June Hawk, and dad divorced earlier on. Pappa Smith took care of his two boys all by himself and raised them primarily in Calgary.

It has been often said family plays a vital role in a person’s life. Things often go awry when a single parent comes into the picture.

Luckily, Kavan never faced any issues during his childhood and he turned out to be an exceptional human being, more so a superb actor.

In addition, he is proud of his father as despite being a single parent, he brought him up without any problem.  Back then, it was a rare sight for a single man to become the sole parent, but Mr. Smith broke all the barriers.

Kavan Has One Brother: Shares a Deep Bond with His Sibling

The Hallmark actor has one brother, though he rarely speaks about him. Despite that, the siblings share a good relationship with each other and their father.

Moreover, Kavan usually visits him whenever he has time in his hands. In an old interview, he stated how he feels nostalgic whenever they meet up. He said, “When I go to visit my brother part of me always feels 18 again.”

Kavan’s early childhood was a bit Heavy on the Testosterone

You might’ve gotten confused, what does heavy on the testosterone mean? Well, let us explain it to you in a simpler way.

We mentioned earlier that Kavan and his bro were raised by their daddy so there were only men in the Smith house. With no females in the household, it is only natural their upbringing differed then others.

On the contrary, the Edmonton native never complained about having a difficult childhood because of this reason.

He even mentioned his childhood in the interview and divulged, “It was fine. Perhaps a bit heavy on the testosterone but still not bad at all.”

Cavan had initially attended a local high school before enrolling in the University of Calgary. He joined the Economics program but later dropped out to pursue acting.

At the college, his grades never stood out and the university even asked him to withdraw.

Subsequently, he joined the Arts Program at Mount Royal University. He studied theatre before jumping into acting.

He took the huge gamble of giving up education over hobby all because he didn’t want to have the same life as his dad. A career with no enjoyment and interest.

Kavan has been working in the entertainment industry since 1993. He primarily works on TV series.

He made his debut in the TV series, Destiny Ridge, portraying the character of Clay Roberts. On the other hand, his big-screen debut came in 2000 with the movie Mission to Mars, playing Nicholas Willis.

Off his numerous acting credits, his most famous work includes Stargate Atlantis (2005-09), where he played Major Evan Lorne.

Growing up, Kavan and his best friend, used to skip a lot of classes and used to create skits together. The child play, later on, turned out to be an actual interest for the actor.

From his teenage year, he knew he wanted to be an actor. Smith’s father was in total favor of his career and even helped him.

What is Kavan Smith Net Worth?

Kavan Smith currently holds a net worth of $1 million. His immense fortune is all thanks to his acclaimed roles in numerous TV series.

The actor is in a delightful marital life with his wife for over 17-years. The couple share two kids, both of them boys.

Kavan himself is yet to reveal the identity of his wife, even so, numerous tabloids claim his spouse is Corinne Clark, a Canadian casting director.

Besides, his chemistry with his When Calls the Heart co-star, Pascale Hutton often led to rumors of their affair. Nonetheless, it is far from the truth as she herself is in a conjugal relationship with her hubby.