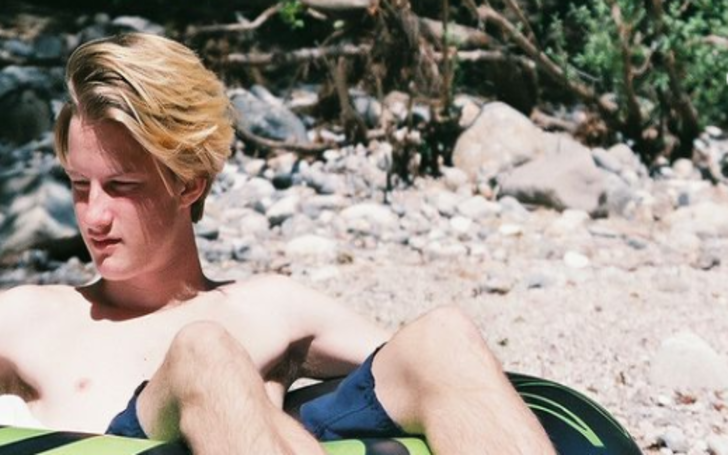 Keegan Hawk is the son of Tony Hawk. Hawk’s father, Tony is a professional skateboarder, entrepreneur, and the owner of the skateboard company Birdhouse. People often refer to him as a pioneer of modern vertical skateboarding. Keegan’s dad is regarded as one of the most influential skateboarders of all time.

While Tony’s oldest son has followed his father’s footsteps, Keegan seems to be just diverting his interest from skateboarding to something else.

So what are his passions in the present? What is he doing? Does he still lives with his parents? How far is he on his career? Know these along with some other facts about Keegan Hawk in the content below.

As A Kid, Keegan Hawk Loved Playing Minecraft And Spore

Keegan Hawk was born on July 17, 2001, in San Diego, California. He studied in a private school. As a child making friends in school was tricky for him because all the kids would only want to talk to him so that they could meet his dad.

Hawk is the second son of Tony and his former wife, Erin. He has a brother named Spencer Hawk, half-brothers Riley and Hudson as well as a half-sister, Kadence Clover Hawk.

Keegan started skating in his childhood. In an interview, he said there never was a definitive stage to say when he started skating, “but for me, it was always there.” He always had a skate park in his backyard. The young adult remembered how his dad and his friends used to make him a pinata when he was just five.

Additionally, he mentioned that he played a lot of Minecraft growing up. Keegan was also big on playing spore, a life simulation real-time strategy God game that he started playing again in his early 20s. He also grew up playing Runescape and follows Ice Poseidon.

What does Keegan Hawk do Now?

For a while, Keegan looked like he has decided to follow in his father’s footsteps. He, however, hardly tried his interest in a competitive spectrum, though, there have been a bunch of videos where he looks like he’s taking the wheel business rather seriously. He prefers standard ground stuff like ledges rails but also occasionally wants to try on the big ramp.

In addition to being somewhat of a casual skateboarder, he is also into photography and a bunch of other cool stuff. Fans have noticed him often skateboarding with his father and close friends.

Presently, as apparent from his socials, he seems to be focusing more on his photography skills. He splits his time between Seattle and San Diego, California. When reported in January 2020, Keegan said he was studying in a college in Seattle, his first year of high school, pursuing photography. His forte is mainly about the landscape but he used to do a lot of digital imaging mainly because of the amount of traveling.

Keegan is also learning about film photography. To Misfits, he explained that he may try and create a strong portfolio in photography so that he can actually make a living off of it.

In the meantime, he is rediscovering old games like Scooby-Doo and We Sports Resorts. He also likes mountain climbing and even considers himself a big climber. Keegan is a huge fan of Iceland.

Keegan Hawk’ Father, Tony Hawk Had an IQ of 144

As a child, Keegan’s father, Tony Hawk had a “hyperactive” temperament and his mother stated he was “so hard on himself and expected himself to do so many things.” One time, the father of four struck out in baseball. The distraught made him hid in a ravine and later his father had to “physically coaxed him out.”

Hawk’s frustration with himself was so harsh that his parents decided to put had him through a psychological evaluation. Tony ended up scoring an IQ of 144 so school advisers recommended placing him in advanced classes.

His parents let him do skateboarding because it served as an outlet for his excessive energy. Keegan’s father, Tony’s skills developed, and he became a professional skateboarder at age 14. He went on to win the National Skateboard Association world champion for 12 consecutive years and had bought his first house before the completion of his senior year in high school.

Why Did Keegan’s Parents, Tony, And Erin Divorced Each Other?

Keegan’s parents, Erin and Tony married in 1996 but divorced in 2004. In April 2020, Hawk’s businessman father said that his jet-setting career was the main issue behind each split including with Erin.

He added that the most challenging factor in his relationships remained travel and prioritizing his time, though, he admitted that each marriage was still ‘very different.’ Hawk also blamed his past behaviors as one of the factors which now he claims has managed to get control of.

The 53-year-old specifically said his marriage to Erin ended due to his travel commitments.

Hawk’s Older Half Brother was a Stoner

Keegan’s older brother, Riley, like all white, teenage Americans, used to make stoner rock in his garage and was afraid of big-booty video girls. Unlike other rich stoner kids, though, he actually used to do stuff. This was back in June 2013.

Riley even left his dad’s company, Birdhouse to ride for Baker to show he can make it on his own. In the early 2010s, Keegan’s older brother along with his friends would spend his days jamming and creating rock music in his dad’s garage. He, however, had no intention of going pro with the band.

Far from those days, Hudson Riley Hawk, now 28 is a professional in street skating. The first child Tony turned pro on his 21st birthday in December 2013. Also, he became Skateboarder Magazine’s 2013 Amateur of the Year on the same day. He has sponsorship deals with companies like Baker and Lakai.

Keegan’s Other Siblings; His Brother Is A Musician Called Gupi

Spencer and Keegan were Tony’s sons from his marriage to his ex-wife, Erin. Keegan’s older brother, Spencer, now 22, is an electronic music producer who releases music under the stage name, Gupi.

After splitting up with Keegan’s mother, the multiple times X Games winner went on to marry Lhotse Merriam. During this relationship, Tony became the father of his one and only daughter, Kadence Clover Hawk who is now 12.

The athlete turned businessman now is married to actress, Cathy Goodman, who also has two sons from her previous marriage.

Keegan and his athlete father had a rather amusing incident to tell. In 2018, the son reportedly found his father’s sex tape. Keegan was then 17  and his dad was out of town. He went into Tony’s room to look for a phone charger. He, instead, noticed a strange yellow glow coming from the top of the dresser. After looking at it for a while, he found a beat-up VHS tape kind of floating around.

What Keegan initially thought was his father’s skateboard video, turned out to be an utmost shock. What’s more, he even went on to invite his friends over to watch the VHS.

However, he was left in shock once he played the tape and found it was all about his dad doing some adult business with a bunch of ladies. Not long after, the news of the Birdman personal incident spread like a fire on social media. Tony, at the time, was in England for a series of promotional appearances. It hit him with a surprise when found out about his son’s discovery.

Keegan, along with his star father, Tony, and the rest of the family, appeared on Steve Harvey’s show, Family Feud. Keegan, who was was fourteen at the time went on to score 71 points during a segment called Fast Money. Later partnering up with his father, he won $25K in prize money.

Tony and his son Keegan often spend a significant amount of time with one another. Together, they enjoy the surf, ski, rock climb, and of course skating.

Much like his father, Keegan, too, had to be rushed to ER after sustaining a skateboard-related injury. In 2018, Hawk’s third child guillotined the top of his index finger. While doing a stunt, the now-freshman fell backward and sat on his board with his hand beneath it. Keegan says the doctor sewed his finger back on but he still feels numb on the area.

The 20-year-old also mentioned the other incident where he hit his toe and it turned blue for about four months. He said after a while the nail fell off, “eventually.”

At 2, Keegan Gave His Father, Tony A Hell Of A Scare

In May 2010, the veteran skateboarder, Tony Hawk talked about an incident where one of his kids gave him the scare of his lifetime. Recalling the moment, Hawk said he had just come out of his home office to find his youngest son, Keegan, who was 2 years old at the time, dancing on a chair.

Hawk added that his hands were holding an ice pick & a kitchen knife. In his mouth was a lightbulb. And he was standing on the chair which itself was on top of the kitchen counter.

The father of four maintained he’s learned that parenting is the ultimate action sport. And he knows action sports. He’s also watched his oldest son, Riley, break both of his elbows—twice.