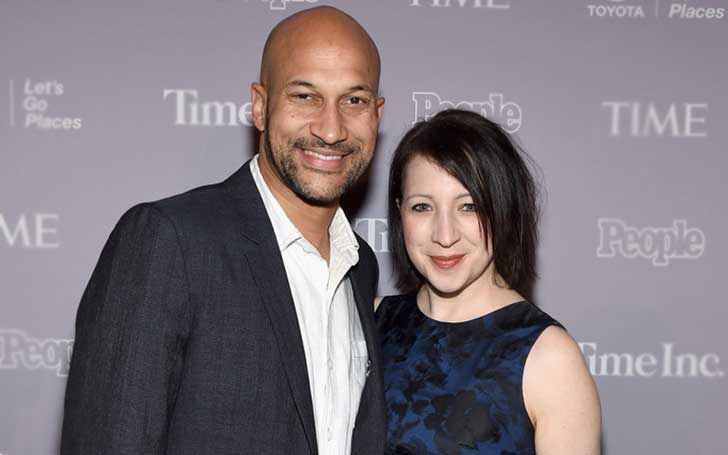 American actor and comedian Keegan-Michael Key has been married twice. The 49-year-old Key & Pelee star was married to dialect coach Cynthia Blaise for over one and a half-decade.

After his first marriage ended in divorce, Key started dating actress and producer Elisa Pugliese and is happily married to her as of now.

In today’s episode, let’s dive into Keegan-Michael’s marriage to Pugliese and his first marriage with Blaise.

The Friends from College star Key married film producer, Elisa Pugliese in June 2018. The lovebirds tied the knot in their New York City home on June 8, 2018. Key and Pugliese kept their wedding relatively private and was attended by limited friends and family members.

The following day, Key took to his Instagram sharing a photo from their big day. In the photo, Key can be seen kissing his wife, Pugliese who held a bouquet in her left hand. “Best. Day. Ever.,” Key wrote in the caption. Here is the post.

Days before Key and Pugliese exchanged their vows, the former talked about their wedding in an interview with Us Weekly. In the interview, the Key & Pelee alum also gushed why they choose to marry at their home. Key said:

“Why would we get married in any place else if we love our home? Let’s have a reception upstairs and then we’re having a party the next day. A big party. So very intimate wedding, very big party.”

Key wore a black suit by Paul Smith while the bride opted for a Prada gown on their wedding day. Pugliese also carried a bouquet of orchids designed by Elan Flowers.

Key and his wife Pugliese hosted family and some famous friends on Saturday, June 9 at One World Observatory in NYC.

Key’s colleagues, Jordan Peele, Paul Rudd, Michael Strahan, Stephen Colbert, Cobie Smulders were some of the attendees at the reception.

As a matter of fact, the couple had a five-tier light-blue cake designed by Ron Ben Israel for the occasion.

The Duo Crossed the Atlantic in their Honeymoon

There was once a time when people used to spend their honeymoon in exotic locations, but gone are those days. The comedian and his partner decided to cross the whole freaking Atlantic.

Key, who has never been on a boat, said,

“We’re going on a crossing,” Key reveals. “Across the Atlantic Ocean — no stops, not a cruise — to Brooklyn. From South Hampton, England, to Brooklyn, New York. I’ve never done anything like this in my life. I’ve never been on a boat. We’re doing the whole thing. We might do a bit of Rose and Jack. It’s going to be winter, so we’ll see.”

You know what they say, the couple who ventures together stays together.

Elisa Pugliese is the Bronx, New York-born actress, and director famous for School of Rock and Boy-Meets Girl.  She graduated from Syracuse University in 1993. She started her career as a make-up artist in the animated movie Snow Queen.

Later, she made her acting debut from her cameo appearance in the School of Rock in 2003. The most recognizing work of her career came in 2013 when she co-produced the highly acclaimed comedy documentary the American Journey.

They Became Engaged in November 2017

Keegan-Michael Key and Elisa Pugliese got engaged in November 2017. A representative for the 49-year-old actor confirmed their engagement to People. Later, Key took to his Twitter to announce the news to his fans. There he wrote: “I’m the luckiest man ever. She said yes!” Have a look:

She shows me every day that each one of us has the ability to help make the world a better place. I’m the luckiest man ever. She said yes! pic.twitter.com/UYhtSQ4GQH

Before he announced their engagement, Key and Pugliese kept their romance largely private from the media and their fans.

However, the pair had attended a couple of public events together including the U.S. Open and the Rescue Dinner hosted by IRC in New York City.

Actor Key was married to his first wife Cynthia Blaise for nearly two decades. The ex-husband-and-wife was in marital bliss since December 27, 1998, before going their separate ways.

Around one and a half months after their split, the former Friends from College star filed for divorce citing irreconcilable differences.

Their union annulled two years later in November 2017. Interestingly, the divorce was finalized just days before Key announced his betrothed to Elisa Pugliese.

Key and his ex-spouse Blaise reached a divorce settlement in May 2017, however, it was only approved in November that year.

According to their agreement obtained by TMZ, Key has to pay $34k per month to Blaise in spousal support. Furthermore, he will have to give her an additional 21% of his gross income if he earns more than $2.153 million a year. Though Blaise can receive a maximum of $700k a year in support as per the agreement.

In addition, Key also provided Blaise with $655k to even out the division of assets and she also got a timeshare in Mexico and her Subaru Crosstrek.

On the other side, Keegan kept his Tesla and various bank accounts.

Cynthia Blaise was born in 1958 in the United States. Blaise worked as a dialect coach in many movies and television series.

She started her career in 1996 from The Spitfire Grill, however, her work in the project was uncredited. Two years later, she worked in Polish Wedding, which is her first known work in the industry.

Later, Blaise went on to work on a number of movies and television series including Justice, Faster, Eli Stone, and Beautiful & Twisted. Her most recent work as a dialect coach came in the 2016 movie, The Tiger Hunter.