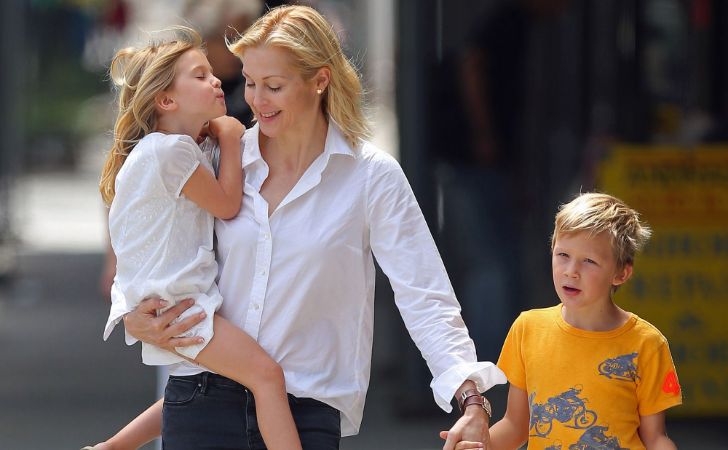 Famous for her portrayal of Lily van der Woodsen in Gossip Girl, Kelly Rutherford grabbed a lot of media attention following her bitter custody battle with her ex-husband Daniel Giersch.

Rutherford and her second husband Giersch divorced in 2010. However, their custody battle for their two kids continued for years.

Here, we are talking about Rutherford’s struggle to be with her kids and her relationship with them at present.

Kelly Rutherford and German businessman Daniel Geirsch started dating in the early 2000s. After dating for some time, the pair tied the knot in August 2006.

Around two years later, Kelly and Daniel were expecting their second child, however, their marriage life was having some serious problem. Due to this, the Gossip Girl actress filed for divorce from her husband of two years.

According to the reports, Kelly filed the court papers on 30th December 2008, citing irreconcilable differences.

Even after finalizing their divorce, Kelly and Daniel engaged in a bitter custody dispute for years. The estranged couple reached a temporary settlement in August 2009 when they agreed to share the physical custody of their two children.

In 2012, Giersch was deported from the USA  after his visa expired in April that year. That August, a California Superior Court announced shared physical custody of their children.

Furthermore, as Giersch lived in Monaco, France, and wasn’t allowed to enter America, the court ordered the children to live with their father in France and attend school there.

Subsequently, Rutherford filed a case in New York seeking the custody of her kids. However, the New York court also ruled that it didn’t have the jurisdiction. Then, in December, the Monaco court confirmed the full custody of the children will remain with their father.

On the other hand, actress Rutherford was granted extensive visitation to their residence in Monaco.

Actress Kelly Rutherford’s first known relationship was with her first husband Carlos Tarajano. Carlos is a Venezuelan banker. The couple married at the Good Shepherd Catholic Church in Beverly Hills in June 2001.

Rutherford and Tarajano exchanged vows in front of around 140 wedding guests. The guests danced to salsa music in the Sunset Room of the Beverly Hills Hotel.

According to the New York Times, the bride wore a Carolina Herrera gown on her big day. Previously, Tarajano had proposed to Kelly with a 3-carat emerald-cut diamond ring.

Meanwhile, the InStyle magazine even featured the couple’s wedding in its February 2002 edition. Even so, by the time, the married couple had already decided to part their ways. As per the reports, Rutherford filed for divorce in January 2002, less than a year after their wedding.

Kelly Rutherford’s current relationship status: Who is Her Boyfriend?

The 51-year-old former Gossip Girl alum remains relatively private regarding her relationships. She is quite active on Instagram where she often shares famous quotes. As of July 2020, Kelly Rutherford’s relationship status is a mystery.

As reported previously, Rutherford dated screenwriter Chiswell “Chum” Langhorne. She had been rumored to be dating Langhorne for weeks before she confirmed it with Us Weekly in September 2018.

The pair sparked a romance rumor after they were spotted leaving New York City’s Mercer Kitchen together on September 3. A couple of days later, Rutherford and Langhorne enjoyed the U.S. Open quarterfinal match.

In March 2019, Rutherford and Langhorne were captured as they shared a kiss on a street in New York City. They were strolling their pets before they stopped and packed on the PDA.

As of now, there is no update if the lovebirds are still dating or they have parted their ways.

While Kelly Rutherford was battling her ex-husband Daniel, she was involved in a romantic relationship with Tony Brand. Brand was an assistant general manager of Gucci. The ex-lovebirds made their relationship public in June 2015.

Rutherford and Brand sparked a romance rumor back in early 2015 after the former started sharing their photos on her social media. In April, people believed the two were dating after they were captured hanging out in the public space.

It is not clear when did they broke up, but they were seen together until fall 2015.  Their last public visit came when the Gucci assistant manager attended court in Monaco alongside his then-girlfriend Kelly.