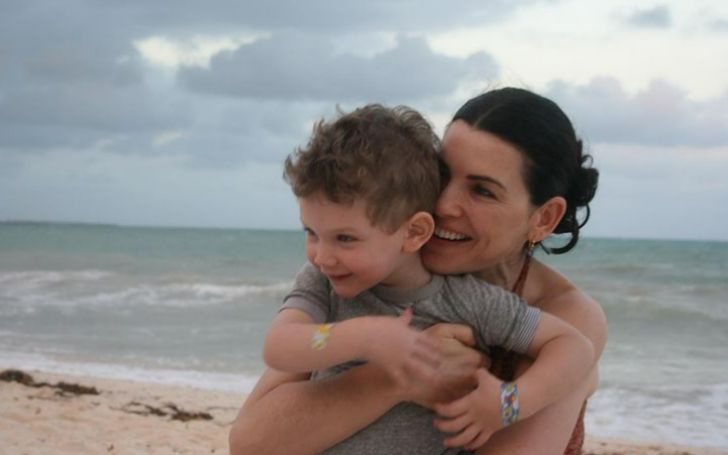 Kieran Lindsay Lieberthal is an American star kid better known as the son of one of the most popular actresses Julianna Margulies. She played the role of Carol Hathaway on the acclaimed series ER, probably a character the actress is better known for. On the other hand, his father is a veteran New-York based lawyer. He is now the Head of Americas at Hakluyt & Company.

Being the son of two successful parents, Kieran has been amidst media and pap since even before his birth. But, most of the details about his life still remain scant. So, let’s find out, what is Kieran doing at present? Is the celebrity kid also trying to pave his career in the same way as his mother?

Here are some untold facts you should know about Julianna Margulies’s son!

What is Kieran Lindsay Lieberthal Age? His Birthday and Birth Details

He is 14 years old as of 2022. Born in 2008, Kieran celebrates his birthday on 17th Jan. His mom has posted several photos of her son on his birthday on her social media handle. On his 14th birthday, the ER actress shared a photo of her son and described him as “Sweet, empathetic, funny and kind,” in her caption.

Besides, moving back to his birth details, it was first revealed by Kieran’s paternal’s grandfather Dr. Kenneth Lieberthal. He told People,

“Obviously I’m utterly delighted to be a grandfather. I have to say, he is cuter than any other baby I’ve seen.”

In the meantime, his maternal grandmother Francesca said on her outgoing voicemail message,

“A beautiful baby boy has been born to us. All is well. His name is Kieran Lindsay Lieberthal.”

Julianna Margulies’ son Kieran is mixed as per his ethnicity as his maternal grandparents were immigrants from Romania, Austria, Hungary, and Russia. He belongs to American nationality and his birth sign is Capricorn.

Kieran Doesn’t Watch Much of His Mother’s Shows

Back in early 2018, Kieran Lindsay Lieberthal’s mother said of her son in a brief interview with Us Weekly, “He knows what I do,” but doesn’t watch her shows. At the time, the actress revealed that her son, “helps me learn my lines. He reads the other characters. He’s very good at it!”

Kieran Was Scared of Santa as a Child

In late 2011, Juliann told People that her then 3-year-old had a fear of Santa who didn’t want to visit the jolly man at the time. The Good Wife star told,

“I tried last year at our Christmas party and he wouldn’t get on Santa’s lap and hide behind me.”

In the same talk with the tabloid, Margulies revealed what her son isn’t afraid to do is helping to other people.

His Occasional Appearance With His Mother and Father

Kieran often appears spending his free time with his mother and father in various places. In March of 2022, the star kid was spotted with his parents enjoying a family trip to Florence, Italy. The famimy of three was seen walking through the streets of Piazzale Michelangelo.

As a celebrity kid, Kieran has also appeared in several high-profile events and functions with his mother. In mid-2015, the little Lieberthal along with his mom and dad attended a ceremony honoring Julianna Margulies with a star on the Hollywood Walk of Fame in Hollywood, California.

His parents Margulies and Keith Lieberthal married on 10th November 2007. Their low-key wedding ceremony was held in Lenox, Mass. The two met for the first time in 2006 and start dating not long after their first meeting.

Recalling the moments, The Morning Show cast said recently to People that her now-husband didn’t have any ideas about her growing career as an actress,

“He honestly didn’t know who I was.”

Where Does Kieran Reside?

He currently resides in a family-friendly Manhattan apartment in New York City with his parents. The condo with the modern-meets-Asian interiors has a studio apartment and a two-bedroom.

Furthermore, his parents have a county house in Upstate New York.

His Mother Is a Multimillionaire

Kieran’s superstar mom Julianna has an estimated net worth of $24 million. She has racked an abovementioned fortune from her works in both movies and TV shows.

So, being the son of the richest parents, there is no doubt Kieran has had a luxurious lifestyle.