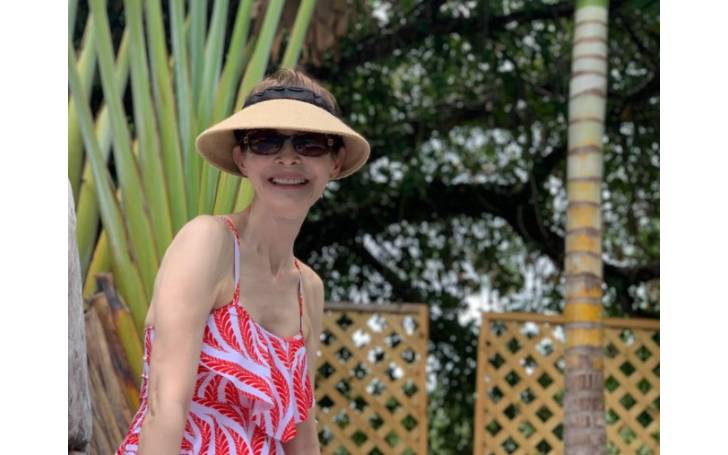 Kim Weeks is an American actor and skincare expert. However, she is famous as the wife of the late actor, Charles Bronson. The pair were married for around five years before the actor’s death.

Kim’s husband was one of the greatest actors of all time. His career spanned more than five decades from which he even won numerous awards. Meanwhile, Kim was Charles’s third wife.

It has been several years since Charles’s death, so it is only natural you all are curious about what Kim Weeks is doing nowadays. In this article, we shall find out her wiki, current whereabouts, and more!

She was born on May 16th, 1962, in Patrick Air Force Base, Florida. As the only daughter of the family, she received all the love and care from her folks. Her father was in the US Army and also worked as a fruit inspector. Information about her mother is not known.

Her full name is Kim Michel Weeks and she belongs of the English ancestry and Caucasian ethnicity. Besides, Kim was raised in Cocoa Beach, Florida, and spent much of her youth in the state.

After spending her younger days in Florida, she took a big decision to move to the Hollywood capital. Initially, she did a lot of odd jobs in order to keep herself afloat. She featured in small commercials and did some modeling here and there.

Kim then bagged a job at the Hollywood agent Michael Viner‘s office. She started working as his secretary and through that she met a lot of big actors and producers.

Her late husband Charles was a legendary actor

On one hand, Kim had a rather not so big career in the entertainment industry, her late spouse was one of the greatest actors that have graced the big screen.

Charles first started his career in the 50s by doing small roles in several TV shows, movies, and stage shows. It was in the late 50s when he scored his first lead role in the ABC series, Man with a Camera.

It was in the 1960 hit movie The Magnificient Seven that Charles become a renowned name. In the following years to come, he made appearances in a lot of big movies including Once Upon a Time in the West, Death Wish series, The Mechanic, Hard Times, and The Great Escape, to name a few.

At one point, he was the most expensive actor, taking up to $1 million a film.

How did Charles Bronson and Kim Weeks’ relationship start?

While working as the secretary for Michael Viner, she first came to know Charles. At the time Charles was married to the late actress Jill Ireland. They met when Kim alongside her boss Michael was visiting the set of the 1977 horror movie, The Sentinel.

In the book, Tales I Never Told, the author Michael Winner said that upon seeing Charles for the first time she had set her eyes upon him. Nevertheless, their relationship didn’t last right away.

It was only a couple of years after Jill’s death in 1990, when the lovebirds started dating. In the same book, Michael Winner mentioned Charles once told him about Kim and how he feels she might be the one with whom he wants to spend his life. He said,

“I think, at last, Michael, I’ve met someone who I want to spend my life with which I never thought I’d do after Jill died.”

And he did. The pair then exchanged vows in an intimate ceremony on December 22nd, 1998.

Regardless of their long-term marriage, the lovebirds didn’t have any kids between them. That being said, Charles was the father of four kids.

He had two kids with his first wife Harriet Tendler, Tony Bronson, and Suzanne Bronson, two with Jill, one biological Zuleika Bronson, and one adopted Katrina Bronson.

While Charles was married to Jill, he also took care of Jill’s three kids from a previous relationship. Charles, Jill, and their seven kids lived together in their luxurious mansion in Bel Air.

During his later years of life, Charles’s health deteriorated rather quickly. He retired from acting completely after hip surgery in August 1998.

After spending a couple of years in recluse, away from the media spotlight, Charles died at the age of 81 at Cedars-Sinai Medical Center in Los Angeles.

According to reports, Charles passed away due to pneumonia and Alzheimer’s disease. That being said, his death certificates cited respiratory failure, and metastatic lung cancer as his cause of death.

What is Kim Weeks doing nowadays?

It has been several years since Charles died and looks like Kim has been able to transition to her new life. She founded EquiVisor, a sun protection visor company based in Los Angeles.

As for why Kim started the company, she wrote on the company’s website, “I used to compete in hunters, jumpers, and eventing.  That meant I was in the saddle six days a week.  I created the visor to solve the chronic sunburn I would go home with every time I went riding.”

In addition, she also revealed how both her grandfather and father had to suffer from major health issues after their skin was exposed to sunlight on a daily basis.

She shares a lot of photos of her work on her personal Instagram.

How much is Kim Weeks net worth?

After Charles’ death, he left a major portion of his income to his wife, Kim. According to reports, Bronson had left his $8 million Malibu house as well as $1.6 million in cash.

Nevertheless, Kim was disappointed when her late spouse didn’t leave his $4.8 million beach house in Vermont. She was reportedly bitter about the fact that she didn’t get all the money that was rightfully hers.