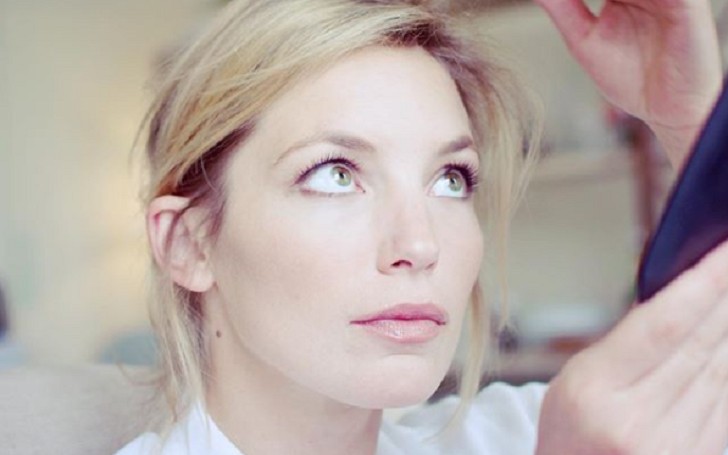 Some sources claim that Kit Frederiksen is an actor but the man has been the center of the media just as an alleged-husband of Perdita Weeks, a British actress. Weeks is widely known for her portrayal of Juliet Higgins on the TV series Magnum P.I. that airs on CBS.

The accomplished performer has also deserved credit for her work on many other highly acclaimed films including blockbuster Ready Player One (2018).

Let’s confirm is Perdita’s marriage to spouse Kit is real? We also try to explore many other hidden facts about Frederiksen you are looking for!

Kit Frederiksen is actually not Perdita Weeks’ husband: How?

We don’t know how the tabloids created such false rumors about Perdita and Kit’s marriage. Sources reported the actress is happily married to Frederiksen for nearly seven years now. And they are raising two twin sons named Humphrey Carrington Frederiksen and Rupert Sebastian Frederiksen together.

But in reality, there is no one Kit Frederiksen who is Perdita Weeks’ hubby. If you are still dubious with us once take a close look at her twitter post in which Perdita clearly denied all the speculations about her marriage and children. She wrote,

“When you have to spend your Monday morning reporting the myriad false mentions on the internet of your “husband” and “children”. You’d think I would remember getting married and birthing twin boys…,” the actress added the hashtag “#oldfakenews.”

Therefore, it’s clear neither Weeks isn’t in any kind of matrimonial relationship nor Frederiksen is her hubby.

Who is Kit Frederiksen? Perdita’s co-star Ben Feldfam is depicted as her Husband

As we have already mentioned above there isn’t a single clue that relates Kit Frederiksen to Perdita Weeks. The same can be said on the guy’s identity as there is zero information about him on the internet. The man is just in the limelight as a life partner of Perdita.

While moving towards his wrong images, a number of sources that added the photo of Perdita’s husband is actually Ben Feldman, her As Above, So Below‘s co-star. It’s a blunder mistake as Ben is already married to Michelle Mulitz for years and his images wrongly taken as Weeks’ spouse.

They worked together in the horror movie As Above. Ben played Perdita’s ex-boyfriend George while the actress appeared as Scarlett Marlowe, a very accomplished scholar on the project. But in real life, they are just good colleagues.

Perdita Weeks currently portrays Juliet Higgins, a former MI6 agent in the TV series Magnum P.I. She began playing the character Juliet who protects known author Robin Masters‘ Hawaiian property in 2018 and has still worked on the project. She appears along with Zachary Knighton, Jay Hernandez, and Stephen Hill on the show.

Furthermore, sharing the screen along with Alex O’Loughlin and Scott Caan, Weeks also played the same character on another CBS series Hawaii Five-0 in 2020.

Made Acting Debut at age 7 With Older Sister

Perdita Weeks has an older sister named Honeysuckle Weeks who is also an actress best known for her longest role in the drama series Foyle’s War (2002-15). Coincidently, Perdita scored her first acting role with Honeysuckle in the TV mini-series Goggle-Eyes at age seven in 1993.

The then-child-actress appeared on a few other on-screen projects like The Cold Light of Day, Robert Rylands’ Last Journey, and more. The sisters again worked together on Rag Nymph, the adaptation of the Catherine Cookson novel in 1997.

Weeks then played Roberta Massingham in the television movie Sherlock Holmes and the Case of the Silk Stocking (2004). She took a hiatus for some time from the acting before making her come back with the TV series The Tudors in 2007. She played Mary Boleyn until 2008 on the show.

Moreover, Perdita portrayed Eliza Meyer on a TV mini-series The Promise (2010-11). Similarly, her other mini-projects include Great Expectations, Titanic, and Flight of the Storks.

Landed Her First Feature Film Role in The Invisible Woman

Her debut role in the feature film came when the actress played Maria Ternan in The Invisible Woman in 2014. The following year, Weeks appeared in As Above, So Below.

In 2016, the actress also took a role in two TV projects Penny Dreadful and Rebellion. Moreover, she appeared in the mega-hit movie Ready Player One (2018) alongside Tye Sheridan, Ben Mendelsohn, and Olivia Cooke.

Weeks was born on  25th December 1985, in Cardiff, Glamorgan, Wales, to Susan Weeks and Robin Weeks. Her mother is a well-read woman who studied at the prestigious Cheltenham Ladies College. She later also attended  Universite de Lille and the University of St. Andrews. Susan is a freelance copywriter by profession while her father Robin owns an advertising company.

They both divorced when Perdita was just 11. She also has a younger brother named Rollo Weeks who previously worked on many movies and TV shows. Sources say Rollo took retirement from the industry to pursue his other dreams. He is a photographer.

Same as it ever was. @rollowade

Talking about her education, Perdita graduated from Roedean School in East Sussex. She then joined the Courtauld Institute in London in order to study art history.

Net Worth of Perdita Weeks

Perdita Weeks has made quite a good fortune from her years-long acting journey. Her estimated net worth is $1 million as per sources in 2020. Her major performance on both movies and TV shows play a major role in collecting such a good fortune.

Weeks played in the box office hit movie Ready Player One which grossed a tremendous collection racking up more than $582 million worldwide. It also got the Academy Award nomination.