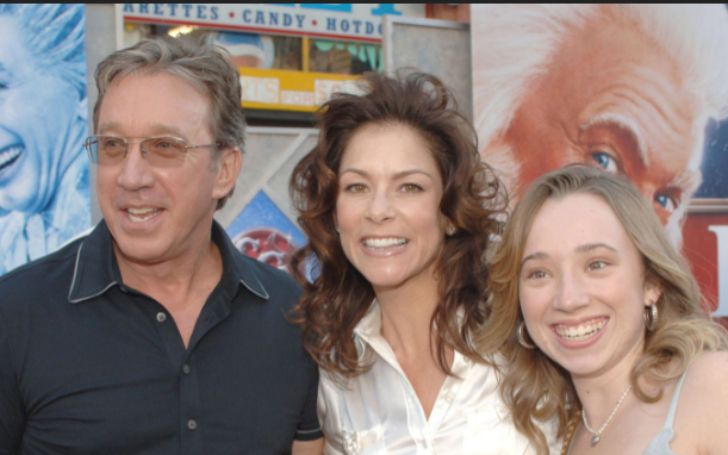 Tim Allen is a father of two daughters, each from different wives so it’s only natural his fans are quite eager to know more about them.

Despite being a star kid, his eldest daughter, Katherine ‘Kady’ Allen likes to remain behind closed doors.

Whatever the case may be, today we’re going to talk about Tim’s eldest child, Kady. And also find about her biological mother and relationship with her step-mom.

Kady was born in December 1989, the only daughter of Tim and his ex-wife, Laura Deibel.

Her parents were high school sweethearts and after dating for a long time, they exchanged vows on April 7th, 1984. And after a few years, they welcomed Kady into this world.

Laura Filed for Divorce: Who got Kady’s Custody?

But after being in a marital relationship for over a decade, they legally separated in 1999. Subsequently, Laura filed for divorce, citing irreconcilable differences.

Katherine’s parents’ divorce finalized in 2003. Despite their differences, Tim and Laura decided to settle it without going on a trial.

In addition, both of them shared the joint custody of their daughter until she came of age.

Tim was Absent for the most part of Kady’ Childhood

In the early 90s, Tim’s marital life was facing a crisis. His career had taken a huge leap after the show, Home Improvement became a national hit.

Tim had a busy schedule which subsequently alienated him from his wife and daughter. He was so preoccupied with his career that he didn’t saw the end of his marriage. In 1997, he even told the USA Weekend, “How many times do I have to tell myself that on my deathbed I’m not gonna say, ‘Gee, I wish I’d spent more time at the office?’ ”

What’s more, Tim even admitted he never really cared much for his family and constantly tried to further his career. And while focusing on his career, he said, “I let my family slide.”

Moreover, he blamed his work schedule for all the mess. Allen even missed seeing his daughter’s upbringing, something which any doting parent wouldn’t want to miss out on. He told The Detroit News, “I never see my daughter at all.”

On the other hand, Kady’s mother Laura was also there by her dad’s side. Back in 1982 when the recent Western Michigan Graduate used to perform at Kutlenios’s club for chump change, she was earning quite well and took care of her husband.

Just three years after Kady’s mom and dad finalized their divorce, her dad re-married. He tied the knot with his girlfriend actress Jane Hajduk on October 7th, 2006.

Besides, the duo started dating in 2001. Their delightful life beamed with more brightness upon the arrival of their first child. Tim welcomed yet another daughter, Elizabeth Allen on March 28th, 2009.

Regardless of how her early life shaped out, Kady still holds immense respect for her father. Moreover, she has a cordial relationship with her step-mom and half-sister, Elizabeth.

She has even attended several red carpet premiere with all three of them. It clearly indicates she is on good terms with her step-family.

Tim wants to amend himself as a Father for his Daughters

In a candid interview with the Parade Magazine Tim went to great lengths to admit his failure as a dad. But he didn’t wail himself out as he is hoped to make a change.

After the birth of his second daughter, he decided to spend more time with her. Tim wasn’t really a great father to his eldest girl, however, the Last Man Standing star has made some significant changes.

He told the magazine, “I was gone so much in my first marriage, I love the moments when I engage with my youngest daughter now. It’s not my thing to sit on the ground and play tea party, but I’ll do it because it’s a moment that will stick with me forever.”

What is Katherine Allen up to these days?

Unlike any other star kids, Katherine likes to remain low profile. Her most recent with her dad and stepfamily was back in June 2019.

The three of them supported Tim at the red carpet premiere of his latest flick, Toy Story 4.

Nonetheless, Kady has made only a handful of appearances and not much known about her current whereabouts.