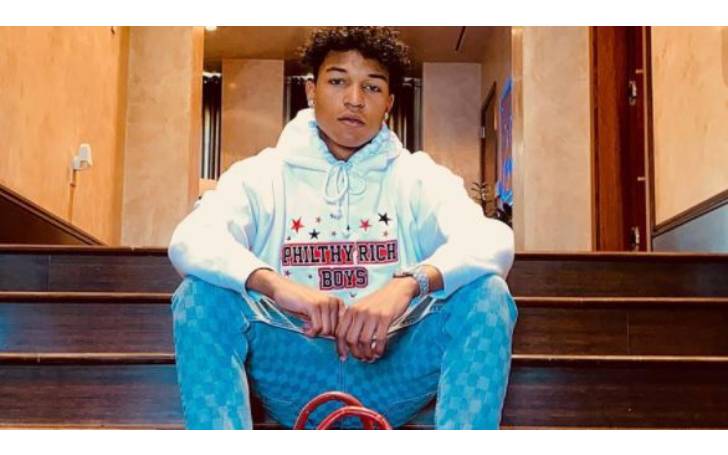 Koraun Mayweather is the son of Floyd Mayweather Jr. and his ex-girlfriend, Josie Harris. His mother sadly passed away in 2020.

Meanwhile, Koraun also has two biological and one half-sibling. Just like his siblings, Koraun didn’t dabble in boxing. Instead, he entered a different field altogether.

Today in this article, we will find what is Koraun Mayweather doing nowadays? What kind of relationship does he have with his father and siblings? Does he have a girlfriend or not? Let’s get right into it!

Koraun Mayweather was born and raised in Las Vegas

He was born on 17th November 1999, in Las Vegas, Nevada. He is the oldest child between Floyd Mayweather Jr. and Josie Harris. Koraun belongs to the African-American ethnicity and has American nationality.

The star kid comes from a line of boxers. His paternal grandfather is the grandson of Floyd Mayweather Sr. a big name in the boxing industry. His grandpa even fought with the likes of Sugar Ray Leonard.

Growing up in Las Vegas, Koraun finished his primary education in the same area. As for his education, he graduated from West Ranch High School in 2018.

When he graduated, his dad was in attendance to witness the eventful day for the Mayweather family. Floyd took to his Instagram account to share the big news to his fans all around the world.

The caption in itself was more than sufficient to reveal how proud Mayweather felt when his son graduated. He wrote,

“I’m so proud of my son for doing something that I didn’t do, and that’s graduate high school. When I️ was his age I️ dropped out of school and followed my dream of boxing to take my family out of poverty!!”

Moreover, Koraun also thanked his parents for motivating him throughout his educational journey.

Koraun’s Parents had an abusive relationship

Throughout his illustrious career, Floyd is no stranger to several criminal accusations. Many of us are already aware of his violent behaviors which have subsequently led to several domestic battery charges made by several females in the past.

When Floyd first started dating Josie, everything was going fine. Then in the early 2000s, his violent behavior started causing a lot of trouble. Josie filed a domestic battery charge against him for which he was suspended from the game for around six months including two days of house arrest.

Then again in 2010, after he was already separated from Josie, he went to her residence at wee hours and ‘yanked her to the floor by her hair, then punched and kicked and screamed cuss words at her in front of their children.’

It was really a frightening experience for the kids. It was Koraoun who alerted a security guard who then called the police.

Koraun has two biological and one half-sibling

His father also has one more daughter named Iyanna aka Yaya Mayweather from his relationship with Melissa Brim. Further, Koraun also has another sibling named Devion Cromwell, who is Melissa Brim’s son from another relationship. Devion grew up alongside the four Mayweather kids.

How is Koraun’s relationship with Floyd Mayweather? He once called his father a Coward

Considering how Koraun witness first-hand how his dad violently abused his mom, there’s no questioning what type of relationship he had with his dad. Of course, he remained on bad terms with his boxer dad.

In fact, in an interview, he went as far as to call his father a coward. Still, their relationship gradually became better. Floyd especially made a lot of effort to make things right with his kids.

Nowadays, the father-son duo is incredibly close to each other. While Koraun shares a lot of photos with his dad on his social media profiles, Floyd has been often spotted training his son in boxing.

Safe to say, they share a good relationship between them.

You guys might find it hard to believe that the son of the legendary boxer finds the sports boring. Yes, you heard it right. In an interview with US Magazine, Koraun said about boxing.

“I find (boxing) boring. It is just like how people sit in the ring and fight for 12 rounds, and it gets boring after a while. Sometimes they run.”

Further, Floyd also believes both of his sons, Koraun and Zion will never make it in boxing. He told that both of them smoke weed so it’s fair to assume they won’t be following in his footsteps.

What is Koraun Mayweather doing nowadays?

Well, he isn’t just sitting around all day spending his father’s benjamins. He is making a name for himself in the rap industry.

He goes by the name King Koraun and released his debut single titled ‘RACK$’ right after graduating college in 2018. In the video, he shows off his affluent lifestyle.

Since then, he has released a couple more rap songs and has even collaborated with a number of artists. Throughout his Instagram account, he promotes his songs and his other business ventures.

His name means Highly Competitive, Confidence, Studious and safe to say, the star kid has certainly lived up to his name.

Does Koraun Mayweather have a girlfriend?

Going through his Instagram account, it looks like he doesn’t have a girlfriend. Although he is not openly in a relationship, there’s a slight chance he might be hooking up with ladies behind the scenes.

Whatever the case may be Koraun is living a great life worthy of being called envious.

How much is Koraun Mayweather’s net worth?

As of now, his net worth is around $300,000. He earns the major portion of his income from his career in the rap industry.

On the other side of the spectrum, his father Floyd is worth a whopping $1.2 billion. The owner of The Money Team aka TMT, earned all of his income from his boxing matches.