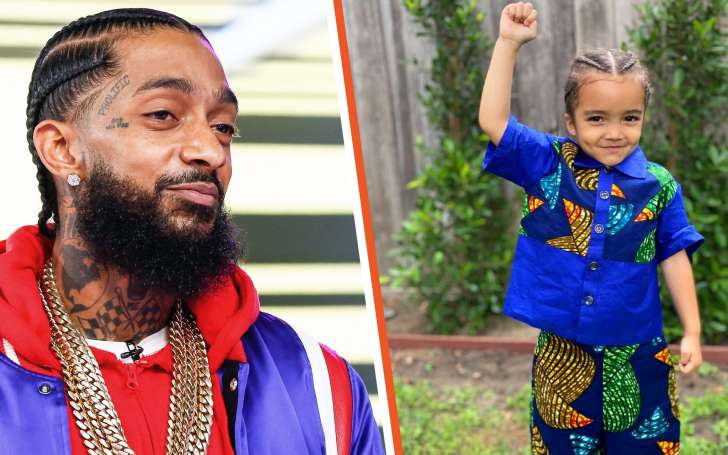 Kross Ermias Asghedom is the son of a late American rapper, entreprenuer, and activist Nipsey Hussle (aka Airmiess Joseph Asghedom). His father was best known for his mixtapes including Bullets Ain’t Got No Name series, The Marathon, The Marathon Continues, and Crenshaw. Further, Hussle was also a community activist who criticized gun violence through his music.

Besides his father, his mom Lauren London is a well-known Hollywood actress. Both his parents Nipsey and Lauren started the relationship in 2013 and were together until the murder of the rapper in 2019. Well, how did Kross’ father Nipsey Hussle die? What Had Happened?

Here, in this article, we are going to explore every detail about the celebrity child Kross Ermias Asghedom including details on his father, mother, early life, education, and much more. Keep reading to know in detail.

When Was Kross Ermias Asghedom Born? All About His Early Life

Kross Ermias was born to his father Nipsey Hussle and his mother Lauren London on August 31, 2016, in the United States of America under the birth sign Virgo. As of 2023, he is 6 years of age.

Similarly, Asghedom grew up under the care of his both mom and dad till the age of 3. After that, his famous dad left the living world, and his mom then single-handedly raised him alongside his siblings.

Besides, the celebrity child belongs to the African-American ethnicity and is an American citizen.

Kross is the only child of his parents. But from his both mom and dad’s previous relationships, he has got an older sister named Emani Asghedom and an older brother Kameron Carter.

Talking about his siblings in detail, Emani is his sister from his father Nipsey’s relationship with his ex-girlfriend Tanisha Foster. She was born on November 9, 2008, which makes her 14 years old in 2023.

Further, his brother Kameron was born to his mother from her relationship with the rapper and singer Lil Wayne on September 9, 2009. As of 2023, Kameron is 13 years of age.

Kross Lost His Father At The Age Of 3; His Dad Was Shot To Death months before Kross’ birthday

On March 31, 2019, Kross’ father, Nipsey Hussle was shot at least 11 times outside his Marathon clothing store in Los Angeles. Hussle always criticized gun violence through his songs and was actively participating against gun violence whenever he got a chance.

Likewise, the day before he was shot, he was set up to have a meeting with L.A. police regarding gang and gun violence alongside Jay-Z‘s Roc Nation entertainment company. But, sadly, he became the victim of the same and died leaving his 3 years old son Kross and his family behind. Nipsey was announced dead in the hospital. On his death, Los Angeles Mayor  Eric Garcetti’s Crisis Response Team stated,

Coming up to 2023, it’s already been 4 years since Kross’ musician father left the living world.

Kross Ermias’ Parents Were Together For 6 Years: Their Love Life And Separation

His parents Nipsey and Lauren London first came across each other in 2013. The couple came together through Instagram. Actually, around the time, Nipsey was in the limelight for his mixtape ‘Çrenshaw‘ as its 1,000 copies were sold at $100 each. Among many of the rapper’s listeners, London was also one.

After that, the actress started following her future partner Nipsey on Instagram and he followed her back too. Like this, the couple fell in love and later got together. They were in a relationship for almost 6 years and separated with the death of the rapper in 2019.

Some days after her longtime boyfriend’s death, Lauren posted a heart-wrenching post on her Instagram as a tribute to her late boyfriend. On April 2, 2019, sharing her beautiful memories with Hussle, she wrote,

After his death, she is raising her son Kross whom she shares with her late partner. Lauren still misses Hussle very dearly as both her lover and the father of her son. On his birth anniversary on Aug 15, 2022, she shared a picture of Nipsey with the caption,

From 60th St to a Star on Hollywood.

Asghedom’s Mother, Lauren Is An Actress; Her Short Bio

Lauren London (aka Lauren Nicole London) is a known Hollywood actress. The California-born actress began her career as a model in the music video and soon made her debut on television in 2006. She first appeared as a TV actress in Everybody Hates Funerals, an episode of the sitcom, Everybody Hates Chris.

Following her acting debut, she worked in several movies and series including ATL, I Love You, Beth Cooper, Entourage, Rebel, and many others. Among her movies and shows, London is best known for Big Happy Family, Games People Play, Baggage Claim, and Without Remorse. For her work in movies, she was also nominated for Black Movie Award in 2006.

Where Is Kross Ermias Asghedom In 2022?

At present, Baggage Claim actress’ son Kross is living with his beautiful mom in her residence alongside his half-brother Kameron.

Kross The Boss! 🏁
My baby is 5.
My Lighthouse
My Strength
Love 💙
BabyHussle

Well, going by his age, Asghedom is certainly studying in an elementary school.

Kross is just a kid. So, there is still time before we are able to estimate his net worth. But, he would certainly inherit his father’s wealth. His father had an estimated net worth of $8 million at the time of his death.