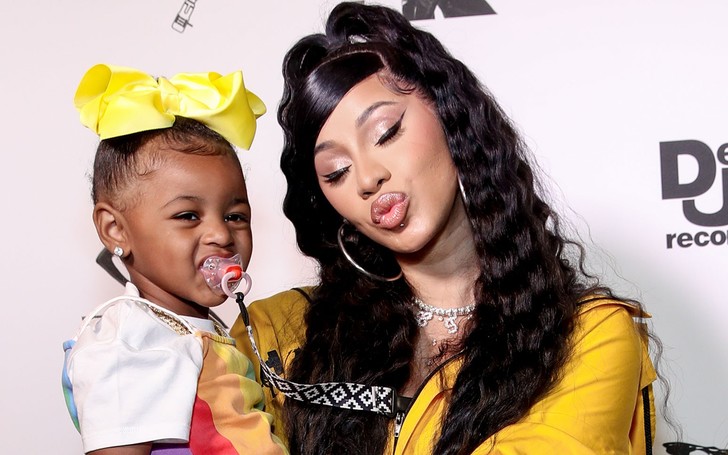 Kulture is one of those lucky little kids who have a mom that’s passionate and fierce about protecting her daughter and keeping her happy. Moreover, she might be among the few who have designer things for herself. The extent of lavishness doesn’t stop there for Cephus. Considering her age, things are only going to get nicer and more comfier for her.

In the meantime, know how much she means to Cardi and her husband along with some of her interesting facts.

Kulture Kiari Cephus Has A Dominican Ancestry: Her Name Has Been Copyrighted

Kulture Kiari Cephus was born on Tuesday, July 10, 2018, in Atlanta Hospital, Georgia. The news of her impending arrival hit the media in April 2018, when her mother was performing at SNL. She received her first crib from musician and entrepreneur Premadonna, by Kapesh Designs.

Her parents requested an official trademark under Offset’s company Sallie Smith LLC. They wanted to file to register merchandising rights for jackets, shirts, sweaters, footwear, skirts, and pants under her daughter’s name. They have secured the copyrights of her name for various future prospects.

Almanzar states although she’s learned a lot since welcoming Kulture, she now knows not to be surprised when things don’t go her way. Cephus’ mother wants her to be bilingual and take self-defense lessons to protect herself.

From her mother’s side, Cephus is of Dominican and Trinidadian descent. Paternal wise, she has an African-American ancestry.

Her father, offset, along with his brothers, grew up in Gwinnett County, a mostly suburban area near Atlanta, Georgia. Her middle name, Kiari is after her father’s name, Kiari. Cephus’ full name in the Dominican Republic is Kulture Kiari Cephus Almanzar.

Kulture has three half-siblings, two brothers, Jordan and Kody, and a sister, Kalea Marie; each born through her father’s relationship with three different women.

Some people criticized the I Like It singer for having a baby out of wedlock but Cardi later hit back saying she and Offset had a secret wedding.

In her interview with The Breakfast Club, Cephus’ mom admitted people reaching out to her online to more or less tell her that motherhood was going to tarnish her professional success.

She told it all bothered her to the point that she even “kinda, sorta” considered terminating her pregnancy for a short time. The singer, however, didn’t want to deal with the whole abortion thing and just didn’t want to.

B said she realized that she is a grown woman and “schmillionaire,” which made her the perfect candidate for being a mother.

Cardi B was close to naming Cephus after her sister, Hennessy Carolina.

“Fun fact :Always wanted a daughter and I always used to say imma name her HennyLynn,”

wrote the Grammy winner. She explained it was going to be a cute mix of her sisters’ names but then she started calling her sister HennyLynn. The Platinum, then, added,

“It’s a cute mix of my sisters name but then I started calling my sister HennyLynn then it became one of the nicknames I gave my sister so it woulda been weird naming my daughter that.”

In any case, Cardi B had explained the final decision was not up to her, but up to her then-fiancé Offset.

The name, Kulture and its meaning is still a mystery. Many fans have theorized it is another tribute to Offset, his family, and his career. People believe it has something to do with her father’s hip-hop group, Migos. In 2017, the group released an album called Culture and then another in 2018 titled Culture II. And presumably, Cephus might have named her daughter, “Culture III,” aka Kulture.

How Famous Is Kulture Kiari’s Mother, Cardi B

In 2018, Kulture’s mother, Cardi B made it to Time magazine’s annual list of the 100 most influential people in the world. Two years later, in 2020, Billboard honored her as Woman of the Year.

Likewise, her first album received certified triple platinum by the RIAA. Also, it was the best-selling female rap album of the 2010s according to Billboard. The critics acclaimed the album. And it made Cardi B the only woman to win the Grammy Award for Best Rap Album as a solo artist.

With the release of Invasion of Privacy, Kulture’s artist mom became the first female rap album after 15 years to receive the nomination for Album of the Year. Multiple publications, such as Billboard, The Hollywood Reporter, and Entertainment Weekly, have referred to her as “Hip Hop’s Reigning Queen” since the release of Invasion of Privacy. In July 2021, B became the 29th elite of Instagram with more than 100 million followers, tied with fellow singer, Rihanna.

Kulture Father Is Also An Artist

Much like her mother, Kulture’s father, Offset is a rapper who is a member of the hip hop trio Migos, alongside his cousins, Quavo and Takeoff. Kendrell Cephus is also an investor in the esports organization, FaZe Clan.

He initially gained recognition following the Migos’ release of their 2013 single “Versace”. Migos’ 2017 single “Bad and Boujee” became an Internet phenomenon, spawning many memes with the lyrics “raindrop, drop top.” The song finished at number one on the US Billboard Hot 100 chart.

Her Father Has Been Arrested Multiple Times

Cephus’ father, Offset doesn’t have a healthy relationship with the law and authorities since the beginning of his early career.

In 2013, Offset met with incarceration in Georgia’s DeKalb County Jail after violating the probation that he had received due to prior felony convictions for burglary and theft. Two years later, in 2015, officials busted him with the possession of an unspecified Schedule II narcotic, possession of marijuana, and possession of a firearm in a school safety zone.

The other felonies Kulture’s father committed include battery, rioting, driving with a suspended license, and carrying a concealed weapon.

Kulture’s parents, Cardi, and Offset’s relationship kicked off on an interesting foot. They encountered each other at an industry event in 2016, fell in love, and secretly tied the knot in September 2017.

Three years later, in September 2020, Cardi filed for divorce from Offset. The soon-to-be mom of two one asked for legal separation at a courthouse in Atlanta on September 15, claiming their marriage is “irretrievably broken” and there are “no prospects for a reconciliation.”

She said so in the wake of her rapper husband’s numerous cheatings.

In the court filings, the American Music Award winner also asked for legal custody of Kulture and to have physical custody both during and after court proceedings.

However, in October 2020, things seemingly got back on track for Cephus’ parents. Going live on Instagram, Cardi revealed that she decided to reunite with her husband during her birthday weekend celebrations in Las Vegas. They are even expecting their baby no 2 which Kulture’s mother announced in June 2020 at BET Awards standing alongside her husband, Offset.

B later explained that she and her husband married too soon and they’re as dysfunctional as anyone could be.

At 3, Cephus Has Her Own Collection Of Luxury Wardrobe

Stars’ kids have that unfair advantage of getting the chance to possess luxury items and Kulture is no exception.

While she may not have an enthusiastic “Birkin wall” in her closet like her mom, the 3-year-old still has a wildly covetable wardrobe. In March 2021, her mother proudly flaunted Cephus’ carrying her first Chanel purse on Instagram — a white flap bag worth $5,000.

What’s more, Kulture has no shortage of designer duds at her disposal. She and her famous mom previously posed in mommy-and-me Burberry outfits. Cephus has also sported looks from the likes of Balenciaga and Moschino on social media.

Her other mindboggling belongings include a $5,900 “KULTURE” ROSE GOLD DIAMOND BANGLE, a $145 Gucci T-Shirt, a Birkin bag worth over tens of thousands of dollars, a $490 Balenciaga suit, a $2k+ designer thread from Versace, French Cotoure, and so on.

It was Kulture’s second birthday and she had received a supremely coveted designer bag from Birkin. Her rapper father posted a video of her unwrapping her present.

What followed was people critiquing B and Offset’s choice of gifting their young daughter a luxe bag worth thousands of dollars. Apparently, the bag came with a price tag of $10,000.

Kulture’s mother, Cardi was quick to defend the decision. She argued celebs’ kids also go to red carpets and fancy restaurants and see things rather than caring for toys and candy.

“And if I’m fly and Daddy’s fly, then so is the kid. If I’m wearing Cha-nay-nay, my kid’s having the same-same, you know what I’m saying? It’s not up to what the kids like. If it was the kids, they’d be outside in diapers,”

B pointed out that people would have judged her anyway had she given her daughter far less expensive things and maintained that she’s not mad her partner gave their daughter a Birkin.

She Received Present Worth $250k For Her Third Birthday

For her third birth anniversary, Cephus received a timeless piece worth an estimated $250,000. The pink watch was from her rapper father. The pink-themed party included ball pits, a Cinderella-esque cake.

B and Offset embellished the celebration by bringing Disney princesses, like Aurora, Cinderella, Belle, and Tiana. In addition, the number of balloons overwhelmed the venue. The birthday also had a petting zoo alongside, again the Cinderella carriage, and a crab leg tower.

People couldn’t help themselves talking about Cephus and that was even before her birth. It would be an understatement to say it was Kulture’s destiny to become a star. B’s fans were all game for flocking their fondness to her daughter when she started her own Instagram; which of course, her mother overlooks.

In her Instagram that has over $2.3 million followers, you can find all of Cephus’s growth, her shenanigans with her songstress mother, but mostly her doings as a little fashionista. Fans can see her occasionally enjoying and showcasing her extravagant possessions from the likes of Gucci, Balenciaga, Chanel, Dior, & whatnot.