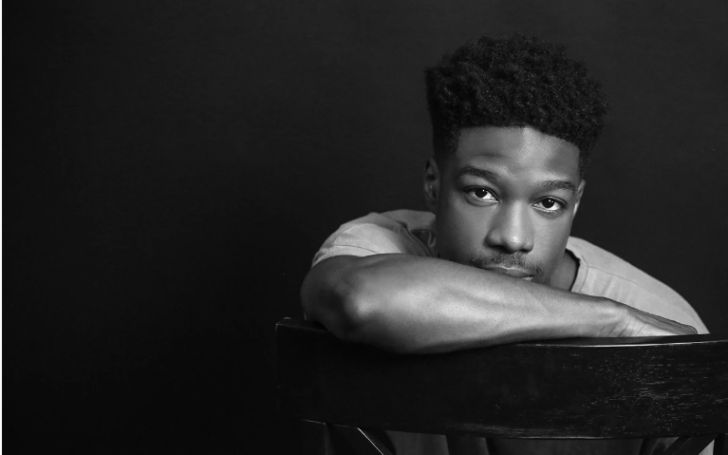 Lamar Johnson is a multi-talented young actor who not has tried his hands in the acting field but also in the dance world as well.

He recently featured in the Netflix show, All the Bright Places alongside Elle Fanning and since then fans are eager to know more about Lamar.

Here today, let’s find out about his family, education, and dating life.

Who is Lamar Johnson?

Lamar Johnson is a Canada-born actor who is famous for his work in movies and series such as Honey, Kings, X-Men: Dark Phoenix, and The Hate U Give. In his short career, he worked alongside big stars like Halle Berry, Sophie Turner, and Sabrina Carpenter.

“I used to be infatuated with perfection until my imperfections showed me what love is.”

The actor is just 25 years of age and yet, he has been in the entertainment industry for more than a decade. Hard to believe, isn’t it!

He made his debut in the entertainment world at the mere age of 9 when he played the role of a little boy in the Jessica Alba movie, Honey. Whereas, his first acting gig came when he was 15-years-old.

Following his extraordinary performance, Lamar became a namesake in the dancing world. Furthermore, he even became one of the youngest hosts of TVO Kid’ dance show, Pop It.

The Canadian actor attended Dr. Marion Hilliard Senior Public School. Consequently, he studied 9th grade at Blessed Mother Teresa Catholic Secondary School before moving to Wexford Collegiate School of the Arts in Grade 10. This is where his career as a performer came to be.

During his time in middle school, Lamar came across a person who was in the acting industry. And this where Lamar’s journey started as he soon made headlines with the movie Degrassi: The Next Generation.

Lamar is a big star right now but if it wouldn’t be for his mother’s constant support and teaching, then he wouldn’t be here. Although he keeps his personal life behind closed doors, in a few interviews Lamar talked about his mom.

According to him, it was his mother who emphasized the meaning behind strong ethics, which eventually helped him succeed.

In an interview back in 2015, Lamar talked about the support he receives from his family and maintained,

“My family and friends are my biggest supporters. Especially my mother, she’s there for me whenever I’m doing anything, even if it’s outside of Toronto she’ll travel to come see me.”

It looks like he is really close to his mom.

Lamar has two sisters which his mother raised all by herself. The three siblings never had any father figure in their lives.

It was his mother who first introduced him to dancing as she too was a dancer. When asked about his inspiration being Michael Jackson, Lamar said, “My mom, she was a big dancer, so she introduced me to his style of dancing. But when I saw the “Smooth Criminal” video, that when I was like, “Yo! This guy is so dope.”

Is Lamar Johnson Dating anyone? Who is his Girlfriend?

Lamar is not in a relationship with anyone. If we study Johnson’s social media handle, then we can say, the cute star isn’t looking for any romance, at the moment. He has far greater things to achieve.

However, fans once linked him with The Next Step co-star, Jordan Clark. We all know how quickly the fans are to link up their favorite stars with someone of their choosing. Similarly, Lamar’s fans shipped him with Clark.

It was a no-brainer to find out why fans were shipping them as their chemistry in the show was quite extraordinary. What’s more, the duo once even crashed a wedding.

Nevertheless, it was all just a thought after all and they remain good friends to date.

What is Lamar Johnson Net Worth?

Lamar’s net worth currently stands at $350,000. He earned his fortune by featuring several hit movies and TV series.