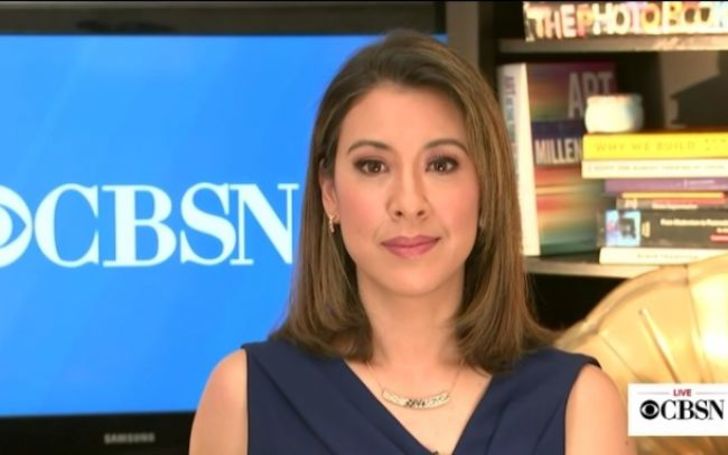 Lana Zak is a journalist who is an evening anchor and principal weekend anchor for CBSN, CBS News’ 24-hour digital streaming network. Zak is the winner of multiple awards including Emmy, Edward R. Murrow, Peabody, Frontpage, and DuPont.
She has covered from hearing of Neil Gorsuch, Michael Cohen, German Election 2021, Haitians Migrants 2021, and Britney Conservatorship. Zak is also the former College Women Of The Year winner.
Her journalism resume is no-short of accomplishments and she is quite a celebrity on her own. But is her personal life as sound as her professional facet? Especially, after the recent fiasco, her husband has risen. Know all about her beginnings as an A-list news reporter, her love life, and much more in the article below.

Lana Zak Is Of Korean And Polish Descent

Zak was born on December 29, 1979, in South Korea but grew up in Iowa. She is the daughter of Jane Michong Zak. Zak has a Korean heritage from her mother’s side. Her ancestral island home was in Ullung Do off the eastern Korean coast.

The DuPont award winner’s mother is Korean and Buddhist while her father’s a Polish and Roman Catholic. While it is unclear how many siblings does Zak has, she though is believed to be the sister of Anna Zak Stecher.

Zak went to Bettendorf High School. She holds a bachelor’s degree in political science and journalism and mass communications from the University of Iowa. There she served as the student body president and was a Fulbright and Truman Scholar.

Zak also studied at Harvard (Kennedy School of Government) where she pursued a master’s degree in public policy, with a concentration in international security and political economy.

Lana Zak’s Career As A Journalist

Zak began her career as an associate director of Policy for the City of Providence in 2003. After one year, she became a communications officer for Columbia University in the City Of New York.

In 2006, she kicked off her journey at the ABC; first starting as a reporter. For ABC, she was an anchor producer for Diane Sawyer, rising to the position of coordinating producer for ABC News Special Units. And then in Aug 2015, Zak became the network’s multi-platform correspondent and then its political correspondent in Aug 2016. During her time with ABC News, she was a member of the White House Press Corps.

The Harvard graduate’s work has appeared on every platform including broadcast, radio, print, and digital. While in a shoot for ABC’s Nightline with Bob Woodruff, she climbed the barrels of the George Washington Bridge. After that, Zak became the first female in history to do so.

As a Washington correspondent, she reported the Trump and Obama administrations, Capitol Hill, and the Supreme Court. Amidst the 2016 presidential campaign, the former student of Iowa reported from every battleground state leading up to the election.

For her work, Lana has cruised and lived through Korea, Spain, and the U.S traveling to all seven continents. Accordingly, she is also fluent in Spanish.

Zak was the first anchor to whom House Whip James Clyburn told that the January 6, 2021 assault on the U.S. Capitol was an “inside job.”

Zak is married to Seth Andrew, who served as an education advisor in the Obama White House. The husband is also the founder of Democracy Prep Public Schools. It is a national network of charter schools in Harlem, and Democracy Builders, a social sector incubator that launched Washington Leadership Academy, the Arena Summit, and Degrees of Freedom.

Together they are parents to twin daughters, Zannah, and Lennox, and a son.

Zak and Andrew met in Chicago, at a summer debate program at Northwestern University. The future couple was both about to enter their senior year of high school.

During their first encounter, they were each officer of their school debate team. They had one face-to-face debate, on America’s China policy, which the future wife of Andrew won.

Zak says their passion for the spoken word drew them to each other. Talking with the New York Times, the now mother of three revealed how her children’s father impressed her by taking her sailing on their first date.

”Seth really tried to woo me,”

The Peabody winner recalled. She admitted to breaking up with her other boyfriend after meeting Seth and consequently realizing that “all the others weren’t the one.”

Seth even flew to Iowa just to prom with his future wife. Andrew proposed to Zak while on a trip to Ullung Do, South Korea.

The Emmy-winning journalist married her entrepreneur husband at Roger Williams Park in Providence, R.I. on Aug 21, 2004. Her father helped build a platform for the wedding party.

The father of Lana’s three children was accused of using more than half of the allegedly stolen money from his Public School to maintain a bank account minimum. He allegedly did so to have a more favorable interest rate for a mortgage on his and Zak’s Manhattan residence. Zak, however, was not charged in the case.

As per the court documents, Andrew in 2019 looted a series of escrow accounts he had previously set up for individual schools within Democracy Prep’s network. He then used their funds to open a business account in the name of one of the schools at a bank.

He was charged with wire fraud, money laundering, and making false statements to a financial institution (altogether worth over $200,000), according to the U.S. Attorney’s Office for the Southern District of New York. The charges come with a maximum possible prison term of 30 years. Zak’s husband, however, is almost certain to get far less time than that if convicted, given federal sentencing guidelines.

Apparently, Andrew and his reporter wife, Zak both had to yield their passports to the officials.

The court let go of Andrew on a $500,000 bond. The authority, though, ordered him to remain in Vermont, where he lives.

Zak’s Net Worth: She Is Allegedly A Millionaire Anchorwoman

While there’s no real telling regarding the net worth or the salary of Lana Zak. In any case, however, one who is curious can rest assured that the Harvard graduate is by no means an average taker when it comes to monetary perks.

The fact that cannot get missed is Zak has been with heavy industries like ABC and CBS for more than 15 years. Stats suggest she could be taking home a salary worth anywhere in the ballpark of hundreds of thousands of dollars to even around a million dollars per year.

Equally important, Zak and her husband have been reported to be the owner of a residence valued at more than $2 million.