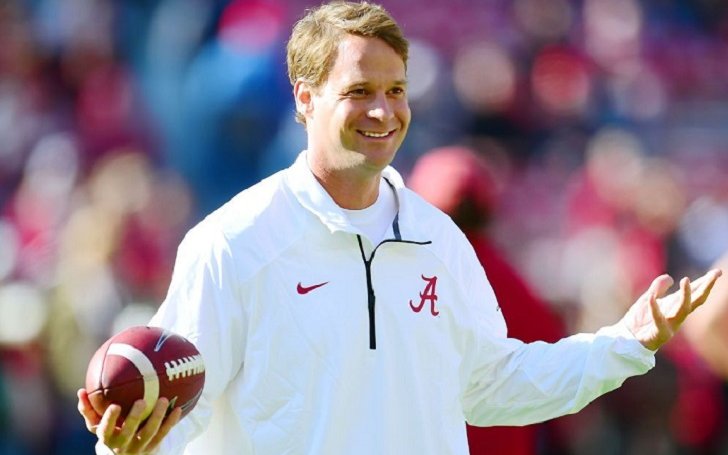 Lane Kiffin is one of the most accomplished American football coaches. He currently serves as a head coach at the University of Mississippi.

Besides, Kiffin made a series of headlines after his alleged romance with the daughter of Alabama’s head coach Nick Saban swirled on the web. At the time rumors first came, he was still married to Layla Kiffin, daughter of a former NFL QB John Reaves.

In the article, we will exclusively mention Lane’s relationship with his ex-wife Layla as well as his relationship status after their split! To know the complete story keep scrolling!

Lane Kiffin wife Layla Kiffin: Married in 2000, how did they first meet?

The two tied the knot in July 2000. They exchanged their vows in a low-key ceremony in the presence of their families and close pals.

Going back to their first meeting, the duo first came across when Lane decided to visit his father Monte Kiffin, a longtime defensive coordinator at the Tampa Bay Buccaneers in 1999. Apparently, back then Layla was running the special-events department for the Buccaneers. And that’s how the two met.

They hit it off immediately and started dating.

Kiffin asked for Layla’s Father’ Permission to Marry His Daughter

The couple got engaged just after dating for three months, however, before proposing Layla, Lane sought out the permission of her late father, Dan Reaves.

“The receptionist at my office buzzed me and said Lane was here to see me. I thought he was going to say that he was getting out of coaching and wanted a job. Instead he asked if he could marry my daughter. I called her to ask her, ‘Is he serious?’ (laughs) I wasn’t supposed to ruin the surprise. They bought an engagement ring that same day.”

The two tied the knot shortly after their engagement.

They have three children

Lane and his former spouse Layla are a parent of three bundles of joys. They welcomed their first child, a daughter Landry in 2005. Their second daughter, Presley was born in early 2007.

Lane Kiffin’s wife gave birth to their third child, a son, Knox in the year 2009. At that time, Lane was the head coach of the University of Tennessee Volunteers.

Upon becoming a mother of three, Layla told Knox News about not able to do anything else,

“I loved what I did and was really happy with the way my career was going. But since they have arrived I can’t even imagine working. It’s just not for me. We’ve said we want more (kids), but I don’t know. I’m very happy with what I have right now.”

The duo lived in a 10,000-foot lake-front mansion in Knoxville with their kids. They also owned a beach home on Treasure Island.

Regardless of how their relationship was full of sunshine and rainbows at first, the pair decided to go their separate ways. In February 2016, the football coach released a statement about their split. Lane told FOX Sports’ Bruce Feldman their separation was amicable,

“After a lot of careful thought and consideration, Layla and I have mutually decided to divorce. We are fully committed to our kids’ future being our No. 1 priority. We will maintain an amicable relationship with respect for each other as we raise these three wonderful children. We will have no further comments and appreciate respect for our family’s privacy.”

As per TMZ, Layla filed for divorce from her husband on 4th March 2016, citing irreconcilable differences. She asked for joint legal custody of their kid in her petition and also sought spousal support.

Lane joked saying he always thought who can take more of his money between his ex-wife and Barack Obama. He finally, “figured it out. I really don’t make any money. I pay around 52 percent in taxes. Layla gets 34.5 percent in the divorce, and [agent Jimmy Sexton] gets 3 percent. I make [about] 9 percent, and I’m living in Tuscaloosa.”

While Kiffin was still married to Layla, his alleged romance with Kristen Saban attracted huge attention in 2015. Kristen is the daughter of the University of Alabama’s head coach Nick Saban. Lane was the offensive coordinator at the University from 2014 until 2016.

However, the speculations were never confirmed. Besides, the radio and TV personality Jim Dunaway also tweeted about the ongoing rumors,

No confirmation on the rumors coming out of Tuscaloosa at this hour. Stay tuned.

Some time later, he made a tweet yet again,

Again, rumors are not news. We (me) will report news when its official. The rest is not worth repeating. So again, no confirmation.

It looks like the speculations were just a hoax.

Some times later, Kristen, an Alabama graduate, married her childhood friend Adam Setas in May 2015.  The following year, Kiffin’s relationship with his life partner Layla also ended in divorce.

Who is Lane Kiffin Girlfriend in 2020?

Kiffin doesn’t have a girlfriend at present. The head coach since his split with Layla has kept every personal detail of his life to himself.

But, back in 2017, Lane was rumored to be dating a realtor Jennifer Dardano. His reported-gf Dardano was previously married to Anthony Dardano, a plastic surgeon.

As per sources, Lane and Jennifer secretly made a few public appearances at the time. A staffer at Wishing Well Irish Pub in Mizner Park told Miami Herald, “Coach came in Monday night to watch the college basketball finals.”

A source added, “He arrived with Jennifer, who also comes here often, and they obviously had a connection. They’re definitely into one another”

Despite all the build-up, they never confirmed the rumors, instead, Jennifer said they are just good friends.

She is the University of South California graduate and currently serves as an account executive for Palm Beach Media Group.

Who Is Lane Kiffin ex-wife Layla Kiffin? All The Details About Her