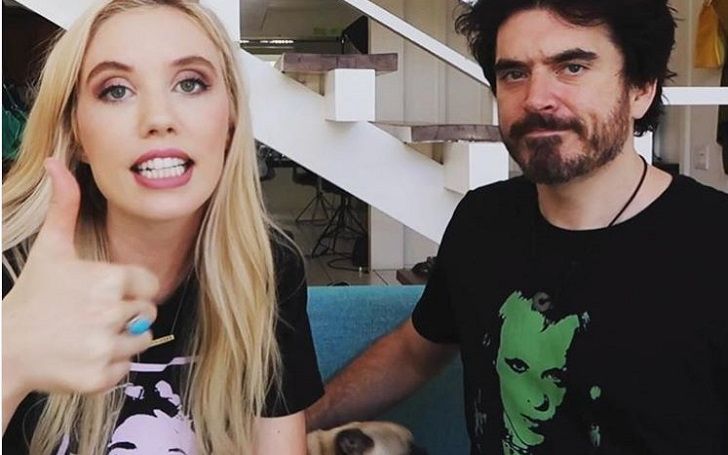 The English musician Stephen Hilton is widely known for his unique composing style. So far, Hilton has worked with a long list of prominent artists like Shirley Bassey, Sky Ferreira, Alanis Morissette, and Oleta Adams, among others.

Hilton is, however, most popular among people as the husband of comedian and digital star Laura Clery. So for those who are still asking, are Laura Clery and Stephen Hilton still married? well, here’s your answer. The lovebirds, who got married in 2012 are still in a delightful marital relationship. They have also two children.

Who is Stephen Hilton Wife?

Hilton’s spouse Laura Clery is one of the most successful digital stars. She gained wide recognition as a creator of the social media sensation, Help Helen Smash.

As of 2021, the Hilton has over 14 million followers on Facebook, 3 million on Insta, and 800k subscribers on her eponymous YouTube channel.

When did Stephen Hilton and Laura Clery get married?

The duo exchanged their vows back in 2012, in a low-key wedding ceremony. The couple has been leading a happy married life ever since.

Although the long-lasting duo frequently appears together on their social media platforms, the two have relatively kept their married life a little bit private. Furthermore, they never talked about their first meeting.

Stephen Hilton and Laura are proud parents of Two Children

The duo, who have been together for over a decade is blessed with two children. They announced they were expecting their first child via Facebook on 15th November 2018.

On November 18th of the year, Laura posted a pregnancy video on her YouTube channel under the title ‘I’M PREGNANT’.

Furthermore, the enduring duo became parents for the second time when their daughter, Penelope Marilyn Hilton was born on 30th March 2021. Laura announced the news via an Instagram post. She wrote the caption,

They Have Played Parental Roles to Several Dogs

Hilton and Clery both are huge animal lovers and have already rescued many disabled animals across the United States. They have a one-eyed pug and named it Avocado.

They own another dog named Tammy. Sadly, one of their puppies died due to a coyote attack back in November 2017.

Stephen along with his spouse Clery formed a digital media company called ‘Idiots Inc’. It creates entertainment content as well as produces shows for TV and commercials.

Where is Stephen Hilton from?

Stephen Hilton was born on 7th Feb 1974, in England, the United Kingdom. He holds British nationality and belongs to the Caucasian ethnicity.

Hilton hasn’t revealed any details about his childhood and family background.

Stephen Hilton is a Musician by Profession

The distinguished musician Stephen has worked with a number of renowned artists and bands in the industry like Badly Drawn Boy, Miguel, and Jon Spencer Blues Explosion.

Besides, Stephen formed The Free Association, a digital studio with the electronic musician and composer David Holmes.

Furthermore, the artist once produced and mixed the music for the National Movie Awards.

What is Stephen Hilton Net Worth?

Hilton’s net worth stands at $1 million in 2021, as per estimation made by various online sources. He predominantly makes money through his music career.