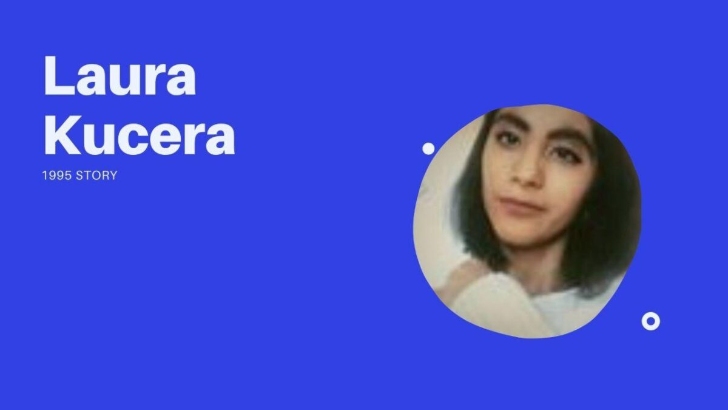 Laura Kucera was an American who received public attention after the news of her getting kidnapped by her ex-boyfriend and surviving a gunshot wound circulated in media outlets. After being shot, her ex-partner left her to die in a ditch but she survived and was found alive after four days.

In the meantime, she became the victim of her boyfriend’s possessiveness which left her drained emotionally and physically. So, in that case, is Laura Kucera alive? If yes, where is she now?

Let’s get to find out what actually happened to her. In this article, we will talk about the cruel phase that Laura Kucera, a 19-year-old girl went through. Let’s get started.

Laura was born to her father David Kucera and her mother Mary Bierman Kucera on August 17, 1975, in Columbus, Platte County, Nebraska, United States. After her birth, her parents raised her in a big family.

Talking about her big family, except for her parents, she grew up with 7 siblings. Among 7, two were her sisters named Sabrina and Dorothy and 5 were brothers named Joseph, Mathew, Charles, Benjamin, and Patrick Kucera.

Similarly, as for education, Laura graduated from Wakefield High School in 1994. And she later joined Wayne State College. Besides, she belongs to the Caucasian ethnicity and was American Citizen.

Laura Kucera Was Kidnapped And Shot By Her Ex-Boyfriend: What Was The Reason?

19-year-old at the time, Laura was kidnapped at a gunpoint by her 22-year-old ex-boyfriend Brian Anderson in Wakefield, Nebraska. The two were in a relationship for several months. But as time passed Brian started taking control over Laure, and she decided to split up.

After their break-up, her ex-boyfriend started harassing her due to which she contacted the police and got a protection order. In the meantime, Brian was ordered a no-contact rule which he broke up and for that, he went to jail for a month. Soon after, Brian was released from prison, he straightly went to kidnap his ex-girlfriend and took her to a remote area of northeast Nebraska where he said,

“If I can’t have you, then nobody else will.”

After that, he shot Laura once in her shoulder and twice in her head and left her in the ditch near Macy, about 75 miles north of Omaha to die.

Even after she was shot thrice, Laura was found alive when the rescue team reached her after 4 days. The rescue team and the police could detect her with the help of one who shot her to death, her ex-partner, Brian Anderson who later had a second thoughts. So, he helped rescuers to find out where Laura is.

After facing such a damaging shot, her spirit was strong enough to pull through herself and to breathe. Not only she survived the shot wound but also she lived after lying in the freezing temperatures of October just in a t-shirt and shorts for 4 days. In this regard, her mother said,

″We don’t know how she survived other than she must be very strong,

Her Ex-Boyfriend, Brian Anderson Was Sentenced To Prison For 55 Years

For a kidnapping charge and murder attempts, Kucera’s ex-lover, Anderson was sent to prison for 55 years. In May 1995, for his cruel killing attempt, Judge Maurice J Redmond labeled Brian as a Bully and a coward and sentenced him to jail for 40 years on the kidnapping attempt and 15 years on a firearm charge.

Seeing their own son in such a situation, his family was absolutely devastated. Though Anderson committed a huge crime, his father, Don Anderson seemed to be a little soft while talking about his son. He said,

″He was looking for love and … he couldn’t handle it, I guess. ″It’s just devastating to us, that something like this could happen.″

Laura Kucera Spent 51 Days In Hospital After The Incident

After she was rescued by the Nebraska police, Kucera was sent to the hospital where she stayed for 51 days. Because she was shot in her head and shoulder, her left side was paralyzed. Also, her right arm was not functioning properly and had to take physical therapy for several months.

The incident took a toll not only on her physical but emotional and mental state as well. Her IQ level dropped to below average as she suffered neurological damage. However, she was trying to collect herself and also was in the process to continue her study too. She had enrolled at Wayne State College.

Kucera Died In Car Accident In 1995

On September 13, 1995, Laura was on the way to her grandmother’s home. She was driving herself near Clarkson and suddenly met an accident and died on the spot.

She got off onto the thick gravel, tried to get out of it and lost control of the car.

She was not wearing a seat belt. She was inconsistent about it. She did sometimes and other times she didn’t.

Sadly, the girl who survived the gunshot lost her life in an accident at just the age of 20.

In 2019, a thriller movie named Only Mine was released on Netflix. The project team claimed that the film is based on Laura Kucera’s tragic life events. The story of the film of course has grabbed some of the things that Laura went through.

However, the end of the movie goes exactly opposite to Laura Kucera’s life. In reality, Laura met with death but in the movie, the protagonist remains alive. The film at last displays the title card that says,

In 1995, Laura Kucera was kidnapped, shot in the head, and left to die. She lived. Her attacker remains in prison to this day. This film is dedicated to Laura, and to victims of abuse everywhere.”

Seeing this, we can say that the movie is very loosely based on Laura Kucera’s life.

There is a lot of confusion surrounding Laura’s photo. In fact, all the photos that are claimed to be of her in the media outlets are rather of a different person, ie, a Partner, Chief Marketing and Sales Officer at Citrin Cooperman who completed her study at Harvard Business School.

It’s still difficult to find out the real face of the Nebraska resident Laura Kucera who survived a gunshot and later died in a traffic accident.

Where Is Daniel Petry In 2022? The Story Of Gabriel Kuhn’s Killer