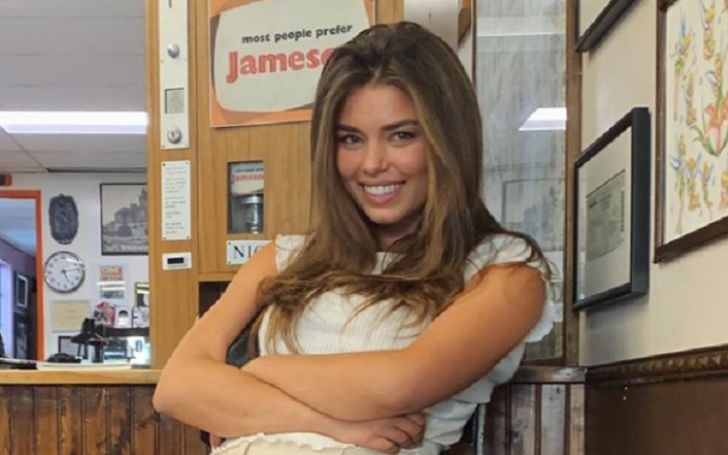 Lauren Searle is a model by profession who has worked for big modeling agency such as Vision Los Angeles. Lauren made headlines in October 2020 after American actor Cameron Monaghan announced that they are in a relationship.

Her boyfriend Monaghan is an actor who gained wide popularity after his performance on the hit Showtime series Shameless.

Let’s know how did the two first meet and how long have they been dating? In the meantime, also explore some other interesting facts about Lauren!

The model is in a relationship with Cameron. At first, Laurene made their relationship official in September 2020 after sharing a series of photos from their hiking adventure on her Instagram story.

When she shared the pictures, everyone was stunned as Cameron never even gave so much as a hint regarding his affair with the model. He only made their relationship official through his Instagram account in October 2020, a month later.

In the post, Cameron is sitting on top of his girlfriend, and as they share a beautiful sunny side smooch from their romantic getaway somewhere around the world.

The actor wrote “Mentally still here,” in the caption. The caption somehow indicates that the image is probably from their trip some time ago. It seems the pair has been going out for a while and until Cameron was certain she isn’t the one he didn’t reveal the big news.

According to fans, the pair met a couple of months ago, however, who first bumped onto who is still a big mystery.

Prior to Lauren, Cameron was previously in a relationship with Peyton List. The couple first came across while working together in the movie Anthem of a Teenage Prophet.

The former lovebirds dated for a couple of years before they went separate ways in Jan 2019.

Searle is a budding model. She works for Vision Los Angeles and Heros Model, two of the most famous fashion and beauty agencies. She began her career in the modeling field while studying in high school. She later started doing modeling full after graduation.

The rising star made her move to Los Angeles in 2018 and landed her first gig at the Guess Campaign. She has since worked for several well-known brands like CUUP, Skims, Monday Swimmer, and more.

Searle has been a model at Factor Chosen Model Management since July 2016.

Lauren is an animal lover: Works closely with The Amanda Foundation

She used to play basketball while at school. To this day, the avid Basketballer, despite not playing, attends NBA games.

Lauren is the daughter of James Searle and Carrie Searle. Her father is an Ashburton College graduate. He is a professional photographer and currently works for The Rock Agency, a Midwest-based fashion and talent company. He has also photographed for Miami’s Design District magazine.

On the other hand, her mom Carrie works at Neora, a age-fighting skincare company.

Lauren grew up along with two younger sisters. Her youngest sister Jane Searle was born in April 2005 and another one Ella Searle came into this world in Jan 2003.

Searle holds the dual nationality of Australia and New Zealand and belongs to the New Zealander ethnicity.

The model has earned a considerable fortune from her flourishing career. Her net worth is $500,000 as of 2020. Besides, her beau Cameron Monaghan has an estimated fortune of $5 million.

Cameron’s acting and modeling career has played a major role in racking such a huge amount of money. He has worked in a number of movies and TV shows. He landed his first TV role as Winthrop Paroo in The Music Man in 2003. He later appeared in Malcolm in the Middle, Ned’s Declassified School Survival Guide, and more.

His film credits are The Santa Clause 3: The Escape Clause, Jamie Marks Is Dead, and Vampire Academy as well.

Other Unheard Facts of Lauren