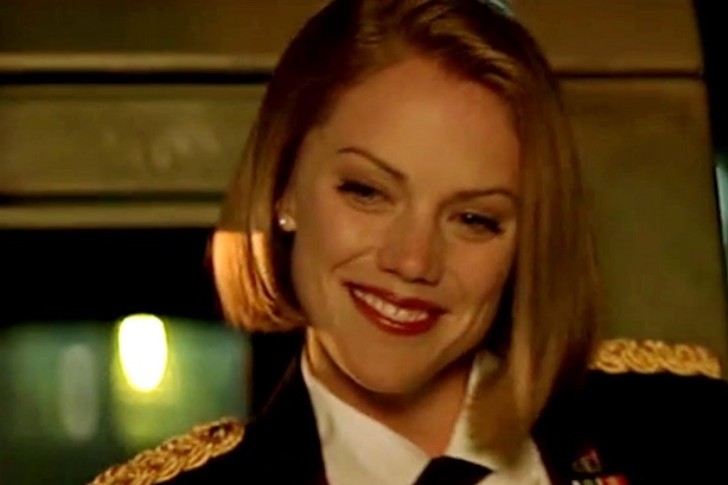 Leslie Stefanson gained worldwide popularity following her breakthrough title role in the hit 1999 movie The General’s Daughter. After a handful of projects in show business, the actress now works as a bronze sculptor.

While talking about her love life, Leslie Stefanson is in a high-profile relationship with prominent actor James Spader for several years. Are James and Leslie Married? Do they have children? Let’s find out all the facts you are looking for.

Is Leslie Stefanson Married to James Spader? Mother to a Child

The two, who have been together since 2000 are yet to be married. Leslie got engaged to her boyfriend-turned-fiance James after six-year of relationship in 2008. But, the endruing duo is yet to show any plan of tying the knot in the near future.

The couple welcomed their first child, a son Nathaneal Spader, on August 31, 2008.  They announced they were expecting their first child on 18th May of that year. Leslie currently resides in a Greenwich Village carriage house with her partner and their 12-year-old son.

Besides, Spader has also two children from his previous marriage with Victoria Kheel, a film set designer.

Stefanson is in a committed relationship with ‘The Blacklist’ actor James Spader. The two are both secretive about their love life. They never revealed when did they first meet.

Well, maybe this is the reason behind their long-lasting and stable relationship.

Besides, the lovebirds have shown their love both off-screen and on-screen. They co-starred in a 2002 crime thriller The Stickup, probably the project in which they first acquainted. They also worked together in a science-fiction-thriller film Alien Hunter in 2003.

Who is Leslie Stefanson Parent?

Leslie Stefanson was born in Frago, North Dakota, United States. She is the daughter of Randy Stefanson (father) and Corinne Stefanson (mother).

Stefanson also has two siblings. She grew up in Clay County, Minnesota with her family.

Upon graduation, Leslie went on to study at Barnard College and earned a degree in English literature in 1993.

Stefanson initially performed in various theatrical plays. She became a member of the New York theater group. Leslie later embarked on a modeling career and also worked for the popular modeling and talent agency Wilhelmina Models in Manhattan.

Furthermore, Stefanson did an advertisement for Lee‘s Jeans in 1997.

Debut with a 1994 Movie ‘The Cowboy Way’: Her other Movies

Leslie Stefanson scored her first professional role in a 1994 action-comedy The Cowboy Way. In 1997, the actress featured in Flubber and As Good as It Gets.

A year after, Stefanson also snagged the role in three other movies An Alan Smithee Film: Burn Hollywood Burn, Delivered, and Break Up.

Better Known For ‘The General’s Daughter’

Leslie Stefanson gained widespread fame after playing the title role of Capt. Elisabeth Campbell in a 1999 smash-hit mystery crime movie The General’s Daughter. She shared the screen along with John Travolta, Madeleine Stowe, and James Cromwell.

The actress later also took part in many other major triumph movies like Beautiful (2000) and Unbreakable (2000).

Stefanson landed her first TV role as Joan Bennett Kennedy in the miniseries Jackie, Ethel, Joan: The Women of Camelot in 2001. Furthermore, she also worked in the medical drama series MDs in 2002.

The following year, Leslie featured in movies The Hunted and Alien Hunter. The projects were her last professional work in the acting field.

Leslie is into arts: She is a Sculptor

Leslie has yet to announce her retirement from the acting but has been on a long hiatus since 2003. Stefanson is currently working as a sculptor, something which she wanted to do since her childhood.

Stefanson even took some professional courses of human anatomy under the professional sculptor, Robert Cunningham in the early 2000s. She later joined the Alliance Francaise, a non-profit organization with educational & arts programming in New York.

Most of her sculptures are based on the female form. Leslie primarily works in bronze and her first signature bronze piece was I Myself Alone that she made in 2004.

What is Leslie Stefanson Net Worth?

Stefanson has earned a good amount of wealth from her career as an actress and sculptor. Her estimated net worth stands at $900,000 as of 2021.

In addition, her husband James has a total wealth of $20 million.

Who Is James Sapder? All about His Family, Education, Parents

Who is James Spader wife? His New Romance With Leslie Stefanson