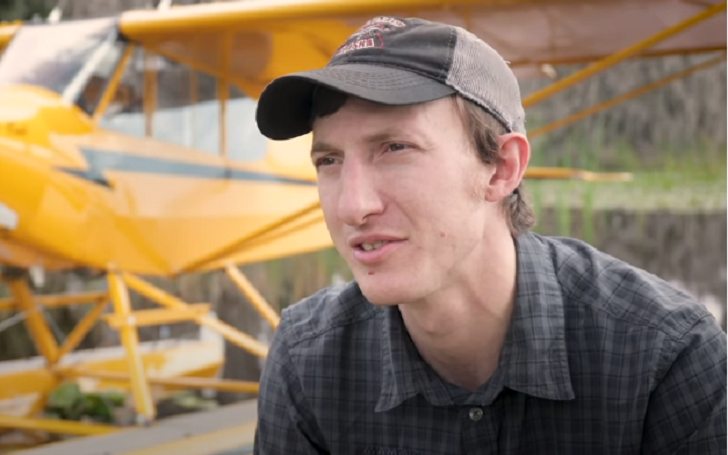 Erik Salitan is a former reality star who rose to stardom after his extreme lifestyle in the remote corner of Alaska documented in the hit TV series Life Below Zero.

The show airs on the National Geographic channel highlights the eccentric lifestyle of people who live in below-zero temperatures of Alaska. His wife Martha was also the crucial member of the show until their departure.

But, after they left the project many of their fans questions what are they doing now? Here, what you need to know about him!

Where is Erik Salitan From? His Early Life

He was born on 9th Feb 1984, in the rural lower 48 states in the upstate of New York, in the United States. He is the third generation Funeral Service Care Giver. However, Erik has kept the details of his family out of the public eye.

Talking about his ethnicity, Salitan is Caucasian and belongs to an American nationality.

His Education: Graduated From the University of Alaska Fairbanks

He attended Finger Lakes Community College. Sources reported Erik left New York to go to Alaska on the last day of his 12th grade at the school. He there enrolled at the University of Alaska Fairbanks and obtained a degree in applied science.

After his graduation, the keen adventurous young man went to Wiseman, a village in the Arctic, Alaska. He used to live in a tent in such extreme conditions until having his own home there.

In the meantime, Erik gradually honed his fishing and hunting skills to survive in such a remote area.

How Did Erik Salitan Meet His Wife? What About Their Engagement?

He came across his wife Martha Mae after his move to Alaska. The couple shares the same interest of living life below zero. At first, Erik wasn’t well-versed in the art of hunting and fishing, however, his spouse helped him out.

The two dated for some time before Salitan popped the question in an interesting way. He failed a couple of times before his then-girlfriend Martha got his engagement ring.

The first time, Erik attached a ring on the tip-up of the fishing rod and asked his bae to reel the rod, hoping she’d see the ring at the end of the tip-up but to his dismay, she didn’t even notice the ring because she ran after a hare.

The second time, Erik did the same thing but Martha didn’t care this time also. A third time, Erik again attached a ring on the tip-up and decided to reveal the ring by pointing it out through the flashlight.

When Did They Get Marry? The Couple Has a Son

Erik and Martha have been married for several years now. Nonetheless, the two never disclosed the date of their wedding. Talking about their children, the two are blessed with a son named Lucas. He attends Wood River Elementary.

Being the son of hunting experts, Lucas also spends his spare time going out with his parents on several challenging places located in Alaska.

Born and raised in Iliamna, Martha is a second-generation sport fishing operator. She used to work in her parents’ fishing lodge. Being a lifelong inhabitant of Alaska, Mae’s knowledge about this area and the lake is really invaluable that initially also helped her husband Erik to survive there.

What is Eric Popular For? His Appearance on Life Below Zero

He came into the limelight after his major performance on the acclaimed reality TV series Life Below Zero. Salitan and his wife Martha had been the cast member of the show since its premiere in 2013. The series produced by BBC Worldwide first aired on 19th May of the year on National Geographic.

It has released 14 seasons to date and also won several prestigious accolades including five Emmy Awards. Life Below Zero won its first Emmy for Outstanding Cinematography for a Reality Program in 2016 and received the award in consecutive years continuously to 2020.

It shows the daily struggle of subsistence hunters to live a life in Alaska, away from most modern comforts. The cast member of the show goes through a lot of hardships to sustain a living there including a lone survivor in the Kavik River Camp in northern Alaska.

He regularly appeared on the project until his departure in 2016.

What Happened to Erik Salitan? Why Did He Leave The Show?

The last time, Erik featured on Life Below Zero‘s episode Renegades of the Arctic, premiered in December 2016. He didn’t appear in some episodes of the 6th season until making his resume by the 7th season that also didn’t last long and quit it with his wife in late 2016.

The couple did not explain why they were let go from the show. Sources reported, they left it to spend more quality time with their family and for many other purposes.

The remaining member of the series includes Chip Hailstone and his wife Agnes Hailstone, Jessie Holmes, and more.

With a wide knowledge of tracking and hunting, Salitan decided to invest his time tending to business. He already has a guide and outfitting company called Bushwhack Alaska Guiding and Outfitting. He has been a part of the business since 1998. It helps tourists and many other nature lovers to live a life in the Alaskan harsh weather and wilderness.

Once his business started raising exponentially, Erik also founded two other lodges: one in Peninsula and another in the Brooks Range.

He also co-operates a telluric Creek Lodge with his life partner Martha in Iliamna, Alaska. He bought it back in 2014. It has private rooms with private baths that feature clean and cozy bedding. The lodge provides anglers the ability to fish several famous fisheries, targeting multiple species.

Besides, Salitan is a co-owner of Blanchard Family Funeral Home and Birch Hill Cemetery. He is also a pilot and a registered guide.

He has been involved in community and volunteer work. He is a part of several conservation groups such as Pope & Young Club, the Alaska Professional Hunters Association, Safari Club International, Dallas Safari Club, and the Northwest Sportsmans Club.

Net Worth of Erik Salitan

His net worth is $300,000 as of 2020. He was paid a good salary from his appearance on the show Life Below Zero. He now primarily makes money through his own businesses.

Erik doesn’t have an account on any social media platform because the TV personality loves living behind closed doors.