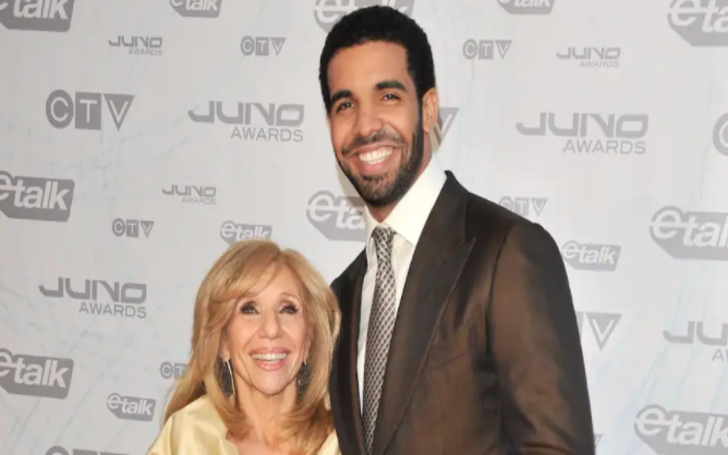 Sandi Graham (nee Sher) is the mother of rapper and Degrassi actor Drake. The Canadian pop artist’s declaration of his love and appreciation for his mom has brought Graham her own share of fan following.

Drake’s parents, especially her mom — have featured prominently in his life and he is not afraid to sing her praises.

Here is everything you need to know about Sandi Graham. En-route, also know about her and her famous son’s struggle; how the two managed on their own, their life after fame, and much more.

Sandi Graham Is From An Ashkenazi Jewish Family

Graham was born on January 28, 1960, to a Jewish-Canadian family (an Ashkenazi Jewish background). Her mother, Evelyn Sher, passed away on Thanksgiving Day in 2012. Sandi’s son, Drake was extremely close to her. The Degrassi star has cited her as his inspiration in multiple tracks whilst also talking about how she helped raise him. Some of his songs even include voicemails from her, such as his 2011 song Look What I’ve Done.

Paying a tribute to her, Sandi’s son opened a sports and entertainment club after her named Called the SherClub in his home city of Toronto, Canada. A year earlier, Sandi had lost a brother in 2011.

Kevin Mimms after doing a commercial video with Drake

Graham was an English teacher for most of her son’s early life. She also worked as a florist, at times. Her father, Rueben Sher was the biggest sports fan, according to Drake.

Sandi and Dennis met in a bar where Dennis was working. Her ex-husband, Dennis is a Memphis-born former drummer and a practicing Catholic from Memphis, Tennessee.

Graham’s former husband comes from a musical family in Memphis and had been a drummer for artist/rock and roll trailblazer, Jerry Lee Lewis at one point. He relocated to Toronto in the eighties and met Sandi at a nightclub called Club Bluenote, again the place where he was an employee.

They later divorced when Drake was only five years old. Drake in an interview revealed his father’s early careering was the primary reason behind his separation from Sandi.

Ms. Graham got full custody of Drake after the separation. The mother-son duo then remained in Toronto while Dennis moved back to Memphis. Graham raised her son mostly in Weston Road in Toronto, a working-class west side of the city.

Later, when Drake was in the sixth grade, his now 61-year-old mother moved with him to a wealthier part of town, Forest Hill.

Although not together, Drake’s parents have a mutual relationship. In 2021, Dennis even shared a hearty tribute to Sandi on her birthday. Sending his birthday wishes to his ex-wife through his Ig, Drake’s father wrote,

“Happy Birthday to one of the most loving people in this world, may you enjoy your special day and I am sure that it will be as special as you are, HAPPY BIRTHDAY SWEETHEART. “

Drake’s parents were also jointly together when their son won the Artist of the Decade at the Billboard Music Awards in May 2021.

Drake Has Talked About His Mom, Sandi In Several Of His Songs

Drake doesn’t hesitate to dedicate lyrics, songs, and social media posts to his mother. The Hotline Bling singer has mentioned his mom, Sandi, over a couple of his songs. He has expressed a lot about her and their family situation in some of his musical creations.

Some of the songs in which Drake gets personal include Successful, Must Hate Money, Look What You’ve Done, You & The 6, and From Time, to mention a few. In fact, the 34-year-old rapper bestowed mom Sandi Graham with the Best Rap Album Grammy he had won for — Take Care in February 2013.

Over the years, it has been pretty apparent, Drake’s love for his mother, Sandi Graham,  and her’s for him, is a beautiful personification of a mother-son relationship goal. The singer has always put her first and Sandi never misses to wish her son his birthday, song’s release, achievements, and son.

As such in September 2021, Graham lavished her rapper son with flowers and encouraging sweet notes in the lead-up to the release of his album, Certified Lover Boy. Drake shared the imaging of the bouquets of red roses and messages that his mother sent him in the days before he dropped his new collection.

Over the countdown of the album’s release, the Canadian mom continued to pour her wishes for the rapper. Whilst doing so she mentioned how being his mother had been her life’s greatest treat. She also described the long hard road they’d taken together.

Her singer son has often spoken about his and his mother, Graham’s struggling days. With Drake to look after, Sandi found half of a house they could live in.

The other people had the top half while the mother and the son had the bottom half. Drake lived in the basement, and Sandi on the first floor. In one interview, Drake explained it was not big, it was not luxurious but it was all that Graham could have afforded. He recalled how his mother would often become sick and that they were very poor.

Sandi Graham Tried To Find Her Son A Partner

Just like any other mother, Graham has done her best and probably still might be doing her fullest to help find her hunky son an ideal life partner. As always this issue, too, has made it to one of Drake’s songs. Sandi’s once said to her son,

This one way or the other was to be featured in the Canadian singer’s collection. And so came From Time and one of its lyrics

It’s a question that not only concerns Graham’s life but also her son’s. She’s saying that the Brit Award winner may be young now, but that youth won’t last forever. He therefore must find a woman he wants to settle down with for years to come, not just at the moment.

The mother even attempted to hook up Drake with her personal trainer.

Sandi Graham Wanted Serena Williams To Be Her Daughter-in-law

In Aug 2014, amidst the rumors about Drake and Rihanna’s rekindled romance, a Hollywood Life report said Sandi Graham was thinking Wimbledon star Serena Williams was “the one” for him. At the time, the tennis player had been reported to have a thing with the rapper.

A source then told Drake and his mother are really tight and like the good mensch, he is, he listens to her. The source further added Sandi wasn’t really thinking of anyone good for Drake, but if she had to choose one woman he’s been with it would be Serena, Sandi loved her athleticism and said she’s a sweet and wholesome girl.

That, however, is a ship that has long sailed as Williams is now married to Alexis Ohanian and Drake himself is dating model Johanna Leia.

In 2017, Sandi Graham and her ex-husband, Dennis Graham became grandparents when Drake’s girlfriend, Sophie Brussaux, gave birth to her son Adonis Graham. At first, Sandi’s son, Drake was unsure whether Adonis was his child. However, a paternity test later proved that the child was indeed Drake’s. born through his brief romance with Sophie.

Sandi Graham Had A Hip Surgery

In an interview with Complex in November 2011, Drake revealed about his mother, Sandi’s surgery on her spine. The highest-certified digital singles artist explained how his mom’s head was separating from her spine.

Fortunately, the doctors were able to reinforce it, and Drake later reported Graham was all healthy and “looking younger than ever, moving better than ever.” Sandi’s famous son then sent her to Rome, a vacation, which she then hadn’t taken in 22 years.

Drake had even canceled his European tour to look after his mother.

Sandi Tried To Run Away

Back in 2009, Graham’s son explained one of the lyrics from Successful took inspiration from his family drama and uncertainty about his future in music.

“When I was going through the creative process for So Far Gone, I was actually at a pretty dark place in my life. It was a frustrating time for my family, because my grandmother — who is now in her mid- to late 90s — was just losing it. It was hard for my mother to watch. And it was just, it was really at a point where it was like, Is this rap thing going to work? Like, Is this my choice? Is this what I am committing to?”

Drake explained Degrassi had ended years ago, and the family was just trying to figure stuff out. The singer added his mother was going through a rough time. Eventually, it became too much for her and one night she broke down and tried to actually run away from the house, “tried to leave it all behind.”

Drizzy had forgotten something in his car. He thus came outside and saw bags sitting by his mom’s car. The mother and the son looked at each other, and Sandi just started crying right away when she saw him.

It is believed Sandi developed a terrible smoking habit due to her past hardships and is constantly on pain medication.

From the hard times of So Far Gone, Drake mentioned his fallout with his mom about his spending and her smoking problem in “Take Care.” In Nothing Was the Same, Sandi’s son called out his mother for wanting to live alone in her apartment and rejected the notion that she preferred solitude because of her illness.

In 2015’s If You’re Reading This It’s Too Late, the 6-God rhymed the tables had turned and that it was his music career that kept him away from Sandi. He explained his success had come at a cost; he had less time for personal connections. However, despite communicating less, the More Life singer said his relationship with his mom remained the same.

The Feud Between Sandi’s Son And Her Ex-Husband

Drake’s father, Dennis Graham, is still present in his son’s life. Dennis had previously received incarceration for drug use but was let go later. The four-time Grammy winner has rhymed about his father being absent for most of his life on several of his songs.

Dennis, however, claimed that Drake presented him as an absentee father just to “sell records.” Sandi’s son later responded stressing that he would say anything to anyone that’s willing to listen to him.

Although they had disliked each other for years, the disdain culminated with Pusha releasing his Daytona album, which had notable digs about the Canadian artist on it. This prompted Drake to release two songs back to back the same day, “Duppy Freestyle” and “I’m Upset,” both targeting the G.O.O.D. Music president, as well as subtly targeting Kanye West.

In the track, Pusha also went for Sandi, stating, “How you (Drake) a winner but she keeps comin’ in the last place?”

Graham was clearly a fan of her son being involved in such an intense feud with another rapper, especially when her family is brought into it as well. The five-foot-two tall rapper’s mother said her son and Pusha T were too grown up to keep up with such a thing.

Unlike her son, Graham’s net worth is yet to be made public. But considering the love and care, she’s been receiving from her wealthy son, that should hardly be of concern. Drake most certainly wouldn’t think for a second even if he’s to pour out all of his massive fortune (close to $200million) on his mother, Sandi Graham.

Whatever the case, Drake’s fans can rest assured with the fact that his and Sandi’s days of living below the means are long gone. As of the present, Graham most possibly lives with her son in an insane Toronto mansion worth over $6million.