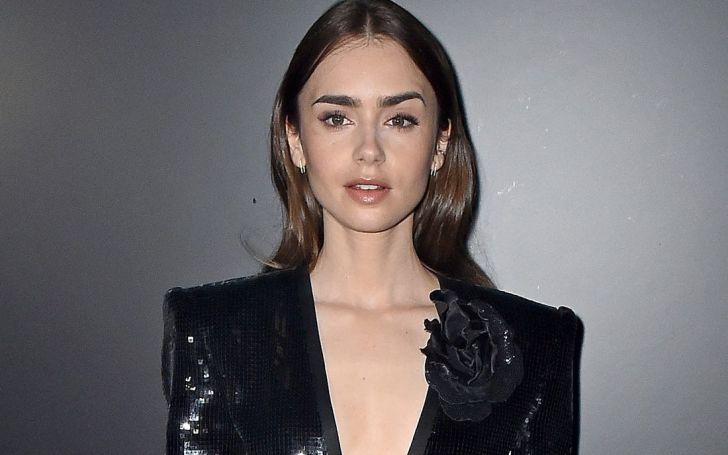 English-American actress Lily Collins is famous for her long dating history with several stars in the past. She might’ve accomplished big feats professionally but her relationships never achieved what they’d intended.

But Lily is in a happy place right now. She is in a great relationship with her director boyfriend for more than a year. In fact, the couple is also engaged.

Besides, she previously had one long-term relationship but sadly, it ended. We’re seriously hoping this time around the beautiful actress walks down the aisle with her boyfriend turned fiance. Let’s take a close look at her relationship and find out who is Lily Collins’ boyfriend?

Lily Collins Boyfriend 2021: Story of her Romance with Charlie McDowell

As of 2021, Lily is engaged to American film director, Charlie McDowell. After dating for around two years, McDowell decided to pop the question and they got engaged.

To be honest, if there’s a relationship in the entertainment industry that is shipped by fans all around, it’s Lily and Charlie’s. News of their budding romance started back in July 2019 when both of them were spotted strolling arm in arm in Los Angeles.

In the pictures obtained by Daily Mail, Charlie was seen putting his hands around Lily’s waist as they shared a few cozy moments.

Both of them are quite into each other. Let’s see in the section below how their life as a girlfriend and boyfriend is going on.

Celebrities these days make their affair official through their social media handles and, Lily too announced her relationship in a similar fashion.

In August 2019, she added a picture where she is leaning onto Charlie’s back as they ride a motorcycle. She wrote in the caption, “Always got your back…”

Likewise, she added a story on her Instagram handle wherein Charlie is seen starring towards an artsy wall. Her caption read, “When he’s only just left but it feels like forever… I miss you.”

Since then, the duo has been sharing quite a lot of pictures with each other on social media.

The family of two turned into a trio when the duo decided to adopt a rescue dog. The 36-year-old director took to his Instagram to announce the big news in December 2019.

Charlie added a sweet picture of their little furry partner. Their puppy is a mix of few different breeds including a pug. They named their pooch, Redford.

I’d like to introduce everyone to Redford. The newest member of the family. A mix of a few different breeds, one of which is pug. His mom and six other siblings were dropped off at a shelter and then made their way to @loveleorescue . What an incredible rescue and if you’re thinking about adopting a dog I highly encourage you to reach out to Sasha. Feeling very lucky and full of love. Marvin, if you can hear me, I miss you every waking moment. You will never be replaced. And as I write this and tears stream down my face, Redford is licking them away, which I think you would approve of. ❤️

Moreover, in the post, Charlie also made a heartfelt message towards his late pet, Marvin, whom he lost some time ago.

As we all know, the whole world in 2020 was in a state of lockdown due to the COVID-19 pandemic. Everyone stayed or is still staying at home in order to flatten the curve.

Similarly, the trio is also stayed in, helping the government. Lily quarantined with the two best men in her life.

On March 16th, 2020, the Love, Rosie actress added a picture with her beau, Charlie, and Redford as they lounged together. She mentioned both of them as her self-isolation squad.

By the By, who exactly is Lily Collins’ Boyfriend, Charlie McDowell?

Lily is renowned on the screen, whereas Charlie here is famed for his work behind the scene. He is a film director and writer.

Born on July 10th, 1983, the Los Angeles native is the son of Mary Steenburgen and Malcolm McDowell. He has one biological sister, Lilly McDowell.

Moreover, he has two step-siblings, Kate Danson and Alexis Danson, from his step-dad Ted Danson‘s side. His step-father Ted is one of the greatest actors of all time. The multiple-award-nominated actor shares his two daughters Kate and Alexis with his ex-wife, Casey Coates.

Besides, Charlie is known for his work in the 2014 movie, The One I Love. The movie starred Elisabeth Moss and himself in the lead role.

His other movie credits include The Discovery, Bye Bye Benjamin, etc.

Lily and her boyfriend Charlie both have famous Parents

Speaking about parents, Lily and Charlie hail from a family of stars.

Lily’s dad, Phil Collins is one of the greatest singer-songwriters of his generation. The multi-faceted personality is known for his time with the band Genesis and later on his solo career.

Her mother, Jill Tavelman was the former president of Beverly Hills Women’s Club.

Nevertheless, Charlie’s mom and dad are equally famed in the entertainment industry. His mom, Mary Steenburgen is an Academy Award-winning actress, whereas, his dad, Malcolm McDowell is an English actor revered often for his villainous roles.

Lily Collins Other Affairs: Had a Few Boyfriends in Past

Prior to falling in love with Charlie, Lily was involved in a relationship with several high-profile boyfriends.

It was back in 2012 when Lily and English actor Jamie Campbell Bower made headlines about their relationship. The twosome reportedly fell in love whilst filming for the 2013 movie, The Mortal Instruments: City of Bones.

In addition, she was also linked with several other big names including, Thomas Cocquerel, Zac Effron, Chris Evans, Noah Centineo. There were also rumors she went out with actor Josh Hutcherson.

A video of Lily and her Extremely Wicked, Shockingly Evil, and Vile co-star, Zac!

Nonetheless, her boyfriend has also been in a few relationships in the past. He dated the Game of Thrones actress Emilia Clarke. Similarly, he was also linked to American actress Haylie Duff.