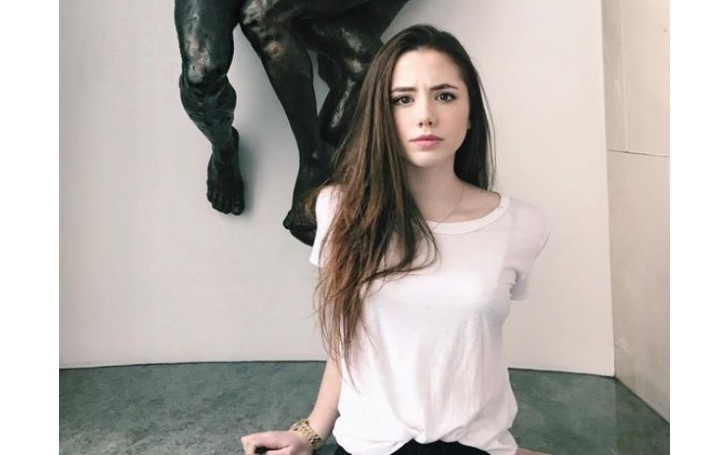 Lily Mo Sheen is an English star kid. She is the daughter of actors, Michael Sheen and Kate Beckinsale. Both of Lily’s mom and dad are acclaimed actors.

While her parents have already established them in the entertainment world, a lot of fans are curious to know if Lily is walking in the same path as her folks or not?

Well, here in this article, we will discuss everything about Lily Mo Sheen including her dating life, wiki, parents, and education!

She was born on January 31st, 1999, in London, the United Kingdom. Belonging to the English and Welsh ancestry, Lily spent the major portion of her childhood in London.

Her maternal side of the family was all into acting. Her grandfather Richard Beckinsale was an English actor famous for his work in the BBC sitcom, Porridge and Rising Demp. On the other hand, her grandmother Judy Loe is also an actress who worked in a number of series and movies including Edward the Seventh, Ripping Yarns and General Hospital.

One can say, Lily sure has all the bells and whistles to become an exceptional actress.

When her parents separated, she moved to the United States along with her mother, Kate, and step-father, Len Wiseman in 2003. Beckinsale then enrolled her daughter at the prestigious Harvard-Westlake School.

The school, based in Los Angeles, is an independent, co-educational university preparatory day school. The school costs around $43,000 a year.

After finishing her studies at Westlake, she joined New York University.

What is Lily Mo Sheen doing? She is an Actor

It is quite evident that when your parents are actors, you might also follow in the same step. Lily is in the same boat. Her parents are also actors. Furthermore, they are not your regular small-time actors, in fact, they have multiple awards between them.

Talking about their work, Michael is famous for his roles in Good Omens, Underworld. In addition, he also has various theatrical drams in his name including Romeo and Juliet (1992), Peer Gynt (1994), and The Seagull (1995). Meanwhile, Kate Beckinsale has worked in several award-winning series including Pearl Harbor, Click, The Aviator.

Now moving towards Lily herself, well, she is also an actor. She first made her debut in the year 2006 from the movie, Underworld: Evolution. She portrayed the younger version of Selene, the character that is played by her mom Kate.

Aside from this, Lily also worked with her mom in Click and Everybody’s Fine. She also worked in The Unbearable Weight of Massive Talent, which is set to release in April 2022. Safe to say, Lily is on track to become a great actor just like her folks.

Lily is making a name for herself independently

When your folks are famous in the entertainment business, it is quite apparent you will definitely have some help in your career. Nevertheless, Lily here is pursuing her career in her own independent way.

In an interview with Entertainment Tonight, Lily’s mother revealed that she is incredibly proud of her daughter. As her daughter is utilizing her own acting prowess in order to get into the entertainment scene, Kate maintains she is giving her room to grow while standing on the side to support her whenever necessary.

She said, “I’m not calling her up and saying, ‘Now, I’ve got a pearl of wisdom, get ready!’

Kate also noted she gives advice to Lily only when she asks for it and not the other way round. “It’s been very important to me to be very independent in that respect.”

“I think it’s really important to her to have her own thing and blaze her own trail and do her own stuff. So as much as it’s quite difficult not to kind of be poking into her business all the time, I really do respect that and I admire how much she wants to be independent from us.”

Well, Lily certainly has done her part to make her mummy and daddy proud. Here’s hoping she continues to do the same in the future.

Is Lily Mo Sheen dating? Who is her boyfriend?

Yes, Lily is currently in a relationship. Her boyfriend is David Schechter. The pair have been dating since 2019 and till now their relationship has been going on pretty well.

Her boyfriend David is also an actor based in New Jersey. Standing at a height of 6ft 3inches, he is a graduate of Skidmore College from where he studied BS in Theatre. He is a student of William Esper Studio.

Back when Lily first introduced her boyfriend through Instagram, she received a lot of sick comments. So David kinda looks like the younger version of Michael Sheen which caused quite a stir in the comment section.

One wrote, “Daddy fetish much?” while another one commented, “Is this your father?”

Regardless, of what everyone said, Lily and David are enjoying their blissful relationship.

How much is Lily Mo Sheen’s net worth?

According to various tabloids, her current fortunes amount to $400,000. She earned all of her money through her work as an actor. On the other hand, she was raised in a lavish manner as both of her parents are millionaires.

Her mom Kate’s net worth is around $25 million and her father Michael has a staggering fortune of $16 million.

Heather Lueth, Mike Lindell Daughter; Who is her mother?