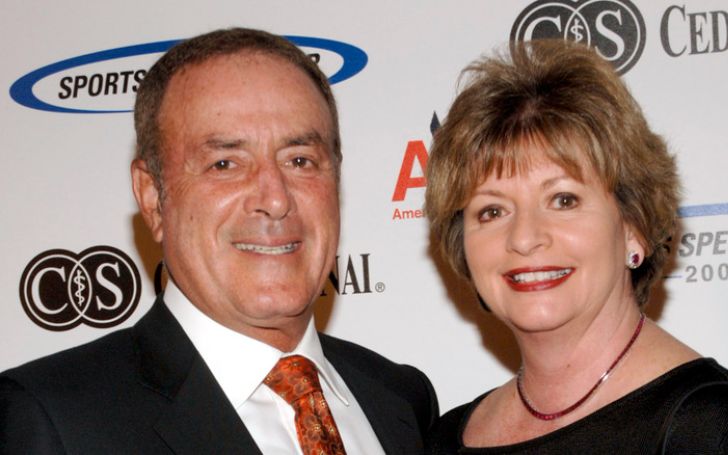 Linda Anne Stamaton is the wife of sports commentator Al Michaels. He is known for his work as the play-by-play announcer of NFL games like NBC Sunday Night Football, Winter Olympics, and earthquake-interrupted Game three of the World Series 1989.

The pair have been together for over 56 years and many of their fans and well-wishers are curious as to how they have maintained their relationship for so long. Likewise, how did they meet? Do they have any children? Besides all this, many of them also want to know more about Linda including her past life, age, and more!

So, if you are also looking for answers to the aforementioned queries you have come to the right place because in this article we will be covering all of the information available on Linda Anne Stamaton.

Who Is Linda Anne Stamaton? Her Early Life And Age

As we said earlier, Linda Anne Stamaton is the wife of AI Michael. She was reportedly born on December 18, 1944. If we are to believe this she is 78 years old as of 2023 and her zodiac sign is Sagittarius. Apart from this, there aren’t any details regarding her parents and other family members.

Regarding her ethnicity, the celebrity spouse belongs to a White racial background and is an American by nationality.

On the other hand, her husband Al Michaels was born Alan Richard Michaels on November 12, 1944, in Brooklyn, New York City, United States. He is the son of Jay Leonard Michaels and Lila Roginsky.

Linda Anne Stamaton Met Her Future Husband When She Was Fifteen

Linda and Al Michaels crossed paths for the first time during high school in grade 10. The pair have known each other since they were 15 years old. Likewise, during an interview with Sports Illustrated, Al mentioned that Linda is the love of his life and one of the biggest pieces of luck he has.

“Linda and I met in the 10th grade so we have known each other since we were 15. She is the love of my life. She is just the greatest. That is the biggest piece of luck that ever came down the pike for me.”

The duo started dating after falling head over heels in love. Stamaton and Michaels’s relationship remained strong even after high school. Eventually, after graduating, both decided to take their relationship to the next level by getting married.

The Lovebirds Have Been Together For More Than Fifty-Six Years

Linda Anne and Al Michaels walked down the aisle on August 27, 1966, in a private ceremony in front of close friends and family members. The couple has successfully managed to keep their marriage intact as they have been together for more than 56 years. The reason behind their long-lasting marriage is a credit to the deep understanding and love they share for one another. Similarly, we also hope that the two of them will be together forever and ever until the end of time.

It is no surprise that people are curious to know if the long-term couple shares any kids or not. Well, they have two children. Their oldest child Steven Scott Michaels was born in 1970. He is the CEO of an entertainment company called Asylum Entertainment which he bought in 2018. Linda Anne’s son has produced various television series and movies including Beyond the Glory (2001), The Kennedy’s (2011), and Happy Valley (2014).

Likewise, the pair became parents to a daughter named Jennifer Michaels Cohn born in 1974. She is a graduate of the University of Southern California. After her graduation, she worked as the director of corporate communications for the Game Show network.

The couple has been a fan of the Los Angeles Kings since the franchise was founded. During an interview with Newsday in 2014, Linda’s long-time hubby said that he would take her on dates to Los Angeles Blades games. They were also present during the Kings’ first season on 14 October 1967 at Long Beach Arena.

Linda and Al were present during the team’s worst performance and vice versa during the 1993 Stanley Cup Final and the 2012 Stanley Cup victory. Likewise, the sports commentator spent $350,000 on game tickets.During the same interview, Al said,

“We would walk out of the building after so many games and say, ‘Why can’t we ever be the Red Wings?”

Alan Richard Michales better known as Al Michaels is a sportscaster. He started his career in television with Chuck Barris Productions choosing ladies to appear on The Dating Game. However, his first broadcasting offer came in 1967 when he worked in public relations for Los Angeles Lakers and color commentator on the team’s radio broadcasts. Later in 1968, he worked as a sports anchor for KTV. Likewise, a year later he was named Sportscaster of the Year.

In 1971, he became the radio play-by-play announcer for the Cincinnati Reds of Major League Baseball. Two years later he replaced Bill Enis as NBC announcer after Enis died from a heart attack. In 1974, Linda’s partner in crime left Reds to join the San Francisco Giants and covered basketball for UCLA. Likewise, in 1976 Michaels signed a part-time contract with ABC Sports for Monday Night Basketball.

In 1977, he signed a full-time contract with ABC Sports and became the network’s top baseball announcer. Over the next 3 decades, Al covered a wide variety of sports including Major League Baseball, college football, basketball, golf, boxing, road cycling, figure skating, and the Olympic Games.

The 78-year-old is private when talking about her personal and professional life so, it is next to impossible to determine her total net worth.

On the flip side, her husband of more than 56 years is a multi-millionaire. He has a total net worth of  $40 million. Michaels earns $11 million a year from his career as a sports commentator.