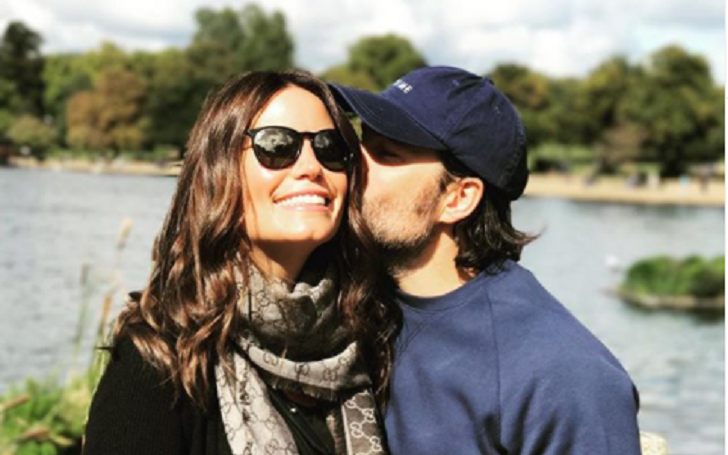 Besides, as for Linzey Rozon’s married life, she is blissfully married to her husband Tim for over six years now. Although Linzey has gained decent exposure as Tim Rozon’s wife, the celebrity spouse prefers to keep away from the limelight.

Well, in this content, we will discuss some interesting facts about her. Find out how Linzey and her husband Tim met. Do they have any children? Further, take a look at many other unknown facts about her life!

The Rozon duo exchanged vows on 6th September 2015. Their indoor wedding ceremony was held in Ste. Agathe des Monts, Quebec, Canada. The couple walked down the aisle in front of their close friends and families.

The same day, Linzey posted a series of wedding photos with her hubby on her Instagram. They looked quite excited for their big day. The couple has since been happily married with no conflict.

In September 2019,  Linzey celebrated their 4th marriage anniversary posting a throwback photo from their nuptials on Insta.

Meanwhile, Linzey Rozon’s husband, Tim always marks their wedding anniversary on Instagram with photos from their wedding. In 2021 also, Tim shared a photo of them from their big day and he wrote “Y6” in the caption.

When did Linzey Rozon and Tim first Meet?

Tim Rozon has kept all of his personal details to himself. The two never opened up about how they met first, but judging by Linzey’s Instagram posts, it looks like they started dating back in the early 2010s. She shared their first-ever photo on Insta on 9th November 2012. She has since uploaded a number of photos with him. The celebrity spouse also shares beautiful photos of themselves on every Valentine’s Day.

Tim, on the other hand, looks quite reserved when it comes to his love life. He doesn’t share a lot of pictures with his wife.

Do Linzey And Her husband Tim have any kids?

The couple is blessed with one child. We first came to know about their bundle of joy when Linzey uploaded a photo of their kid with her spouse in the honor of Father’s Day.

In the beautiful picture, Tim is seen playing with his kid as the actor shows his child a book full of animal pictures.

Tim’s wife captioned the picture, “Happy 1st Father’s Day to the best dad ❤️ S4L ❤️ @realtimrozon.” She has since posted a number of photos of her child on her social media handles. But, the details of the baby like his date of birth and name still remain behind closed doors.

Where is Linzey Rozon from? Her Bio and Mother Demise

Linzey Rozon was born in Canada. She is Caucasian as per her ethnicity and has Canadian nationality. She often posts her childhood photo with her mother on the occasion of Mother’s Day. Sadly, there are reports that her mom died in 2012.

Besides, Rozon is a horse lover and often enjoys horse riding in various places. Her Instagram is full of horse photos. Apart from horses, the celebrity spouse is a dog and cat lover.

It seems as if Linzey is an equestrian. In one of her photos, she even wore a dress that is generally worn by equestrians.

As for her birth details, Rozon was born Lindsay Govan in 1985. And her age is 36 as of 2022. Unfortunately, we don’t have her exact birthday as of yet.

Currently Resides in Montreal with Her Family

The information about Linzey’s past love affair is yet to be disclosed. On the other hand, her hubby Tim was once rumored to be dating actress Alex Jackson. But the two never confirmed the speculations.

Tim Rozon was born on 4th June 1976, in Montreal, Quebec, Canada. He landed his first professional role portraying Dandy Man in The Great Gatsby in 2000. He played a waiter in the TV movie, See Jane Date in 2003.

A year after, in 2004 the actor went on to appear in several television projects like Crimes of Fashion, Naked Josh, I Do (But I Don’t), 15/Love, and Fries With That. He rose to fame after playing Tommy Quincy in the drama series Instant Star (2004-08).

His other projects include Rookie Blue, Against The Wall, and Being Human.

Linzey’s hubs Tim became a big name in the entertainment industry when the actor took the role of Mutt Schitt, Alexis’s former love interest in the acclaimed TV series Schitt’s Creek. In the series, he appeared along with Eugene Levy and Catherine O’Hara as well.

From 2016-21, Rozon played the main role of Doc Holliday in Wynonna Earp, a series inspired by his own book of the same name. Moreover, the entertainer also snagged the role of Isaac Stelling in Vagrant Queen in 2020.

Tim is an author as well. He has written books like Wynonna Earp: Bad Day at Black Rock, Wynonna Earp Legends: Doc Holliday, and a few more.

In 2018, the actor alongside the cast of Wynonna Earp won the People’s Choice Award for the best Sci-Fi show.

Along with numerous TV and film projects under his belt, Tim Rozon has also earned quite a good fortune. He has an estimated net worth of $1 million as of 2023. He mainly makes money through his acting career.

Talking about Linzey, her net worth is yet to be estimated as there is nothing about her profession.

Not many know but Linzey is active on social media, Instagram to be precise. She has nearly 4k followers on her account under the user name Linz. Well, like any celebrity, she pretty much gives insight into her personal and professional life through her posts.

Linzey loves posting about her day-to-day lives and there are numerous photos of her hubby and son on her Insta. On the other hand, her love Tim is also huge on the platform with 140k followers.

Where Is Lindsay Brunnock From? Untold Details On Kenneth Branagh’s Wife