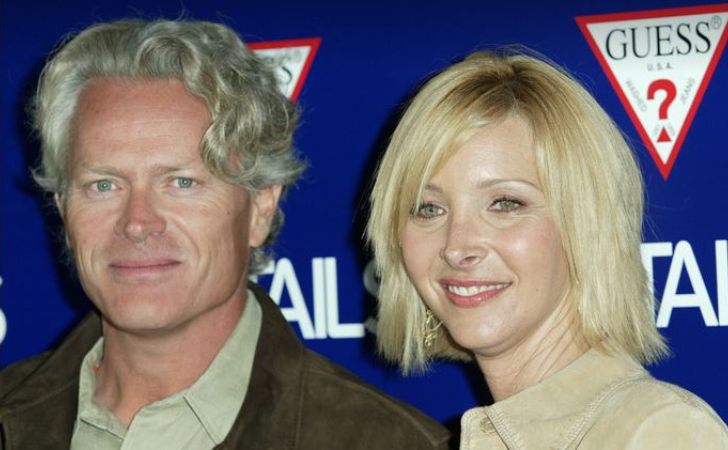 Michel Stern is a French-born American advertising head who is better known as the longtime husband of actress, comedian, writer, and producer, Lisa Kudrow. Stern’s wife, Kudrow is internationally prominent for portraying Phoebe Buffay in NBC’s hit sitcom Friends, which aired from 1994 to 2004.

While Kudrow’s character in Friends, Pheobe ultimately marries Paul Rudd’s Mike Hannigan on the series, off-screen the actress had long been married to Stern. They have been on a marital ride for more than 25 years.

Though the Californian actress does not talk extensively about her married life on camera, she has spilled out a few things about her marriage on a handful of occasions.

Know what Kudrow has revealed about her partner so far, and to what extent the media really knows about Michel Stern. Is his biography as in-depth as his wife’s? What constitutes his early life, career, what does he do for a living, and such?

Unlike his celebrity wife who is pretty out and out about her life, Michel comes across as pretty standoffish (internet-wise) when it comes to giving out his side of the story. Be it his origin, his recollection of how he met his wife or the facts about his parents.

As a deduction, it is unclear and often annoyingly so as to what Stern’s early life looked like. What’s known nonetheless is Lisa’s husband, Stern has been an advertising executive and businessman operating mostly from LA.

How Kudro fell in love with her real-life husband has a bit of an intriguing back story. Lisa and the French-born L.A. advertising executive first met each other in the 1980s.

Though at the time, Stern was dating Kudrow’s roommate who was also French. Kudrow admits she liked Stern from the time she laid eyes on him, but she respected their relationship and kept her feelings to herself.

In an interview, the Emmy winner said,

“I was living with a French girl and he had just moved here and they were dating when we first met,”

The Los Angeles native then added,

“But I’m freakishly polite, so I saw him and went, ‘Well, he’s the perfect man and it’s all ruined because now they’re together and I can’t [try to start something with him].’”

Kudrow thought it was not right to flirt with Michel right away. But the actress admits the minute she saw him she went, ‘Well, that’s it, there he is.’

When Stern would come to pick up Kudrow’s roommate, he’d say to her,

said the 58 years old actress explaining the initial times she knew her future husband. Two and a half months later, Lisa’s roommate and Michel ended their relationship. They, however, remained friends.

Despite Kudrow’s French roommate and Stern being no more a couple, Lisa wouldn’t meet Michel for the next six years.

Kudrow and the European immigrant would meet for the second time six years from the time they first met each other. It was at Lisa’s French roommate’s birthday party.

“Six years later I met him again at her birthday party and we just never stopped,”

Their Wedding; Are Stern And Kudrow Still Married?

The couple eventually started dating and after five years of courtship, Stern married Kudrow on May 27, 1995. The pair tied the knot a week after the first season of Friends wrapped up.

They had their wedding in Malibu, California.

Although Lisa is quite indicative about a bit of her professional as well as personal life through her social media logs, she seldom shares what is going on with her husband. They, in any case, are very much together.

Almost three years after their marriage, Michel and Lisa welcomed their first and only child, a son named Julian Murray Stern on May 7, 1998. Decades later, Kudrow recalled a special ritual the Friends cast did, which eventually included her son, Julian.

She then revealed when her co-stars knew about her pregnancy, they would say,

And that’s how the cast of Friends included Stern and Kudrow’s little fetus in the huddle. Kudrow and Stern’s son, Julian graduated from the University of Southern California School of Cinematic Arts in May 2021.

Shortly after, the mother of one had also taken it to her Instagram to announce the special occasion. Despite his mother’s famous role, Stern’s son Julian has admitted that he is not a fan of Friends. He instead apparently loves Games of Thrones.

From the beginning of their union, Kudrow and Stern made a pact that they would always work hard on their relationship.

The couple says they knew from the beginning that they cannot love each other so they instead promised to work on whatever problems they would face in their marriage.

“When [Michel and I] decided to get married, we understood [that] we’re not promising to love each other forever because you can’t do that, but we are promising to work on whatever problems come up,”

The Reason Behind Michel And Kudrow’s Marriage Surviving This Long

Lisa once said the reason behind her and Stern’s lasting marriage is that neither of the partners is willing to lose their independence.

In the past, Michel’s spouse has opened up about how much they value the importance of individuality in their relationship.

While talking to Glamour in Nov 2014, Lisa said,

“[Michel and I] respect each other’s independence, and I don’t mean that as a euphemism … If he wants to go on a golf trip, he goes,”

The actress/writer also talked about her opinion of how the couple’s reason for getting in trouble is because of their assumption that they had to be one unit, in sync about everything. Kudrow rather believes marriage is like being on a team.

“Each teammate is different, but you have the same goal,”

[Michel and I] respect each other’s independence, and I don’t mean that as a euphemism. I don’t mean relationshipwise outside the marriage. Clear? But I don’t like to travel.

Stern’s longtime actress wife then mentioned how if her French-born partner wants to go on a golf trip, he goes. The couple respects each other’s individuality, they have their own goals and achievements, but they know they’re on the same team.

Kudrow does believe independence is key to a great marriage. She has even advised other couples to stick to their freedom, as she did with her husband.

Stern once revealed his actress wife’s jokes routinely go over his head. And apparently this trait of hers, to him, is the most recognizable Kudrow’s characters;

Michel states the deadpan delivery of his wife is her trademark.

“Most of the time I don’t dare ask her. I just keep trying to figure it out by myself.”

Stern Didn’t Like Several Habits Of Kudrow In The Beginning

In addition to her humor, there were also some other Kudrow’s talents that weren’t as pleasing to Michel when the two started their relationship in 1992.

As such, according to Stern, himself, he found it horrifying by a few of his wife’s habits in the kitchen. For instance, the actress used to love eating slices of orange American Cheese and she used to eat too many candies; Smarties and M&M’s.

Michel admits he wasn’t fond of Lisa’s habit of spreading all M&M’s on a piece of aluminum foil, putting them in the oven until they melted, and ultimately eating them with a spoon. Stern though has praised his wife when it comes to her abilities as a mother.

He has admitted the way his wife is with their son always pushes him into complete awe.

Was Michel Stern On Friends?

Despite the rumors and speculations, Lisa’s spouse, Michel was never on his wife’s career-defining series, Friends.  However, when Kudrow announced her real-life pregnancy, the writers of Friends worked it into Phoebe’s season 4 storyline to explain the actress’ growing belly.

The show’s fans now know this as the time the Smelly Cat singer became a surrogate for her brother’s triplets.

Is Michel Stern Rich; What Is His Net Worth?

On one hand, Stern’s longtime partner, Kudrow is comfortably rich with a net worth of over $90million. However, on the other hand, the details of the actress’ husband, Michel’s net worth is something of a taxing pursuit of notions and rough guesses.

Michel’s partner, Kudrow was one of the highest-paid TV actors bringing in about $1million per episode during the final days of Friends. The correspondent narrative though doesn’t appropriately define Stern’s likewise metrics.

As an executive-level man, it seems probable that the father of one too has had gains and earnings in the hundreds of thousands of dollars. What Stern has made so far to his net worth, however, is yet to get out in the open.

Whatever the case though in all apparent it might be safe to say, Michel Stern may have a sizeable wealth although it likely pales in comparison to his wife who reportedly still brings in millions a year from her loyalty clause.