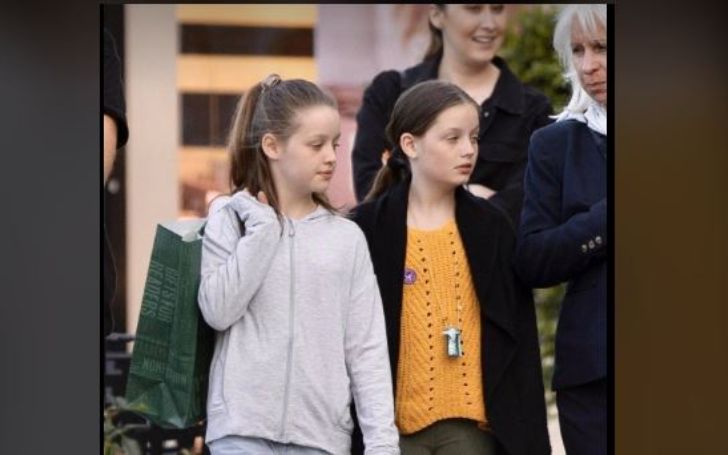 Finley Aaron Love Lockwood is respectively the daughter and granddaughter of the Lights Out singer, Lisa Marie Presley, and the late King Of Rock and Roll, Elvis Presley. The Now What singer, Lisa had Finley with her ex-husband and the Hawthorne-born guitarist and producer, Michael Lockwood.

Finley along with her twin sister, Harper is the third grandchild of the King, Elvis. And even decades after Boby P’s death, his widows, his daughter, and even his grandchildren have been in the news buzz time & again.

Such is the status quo with one of Elvis’ third generations. Though only 14, Lisa’s this daughter spawns quite the spirit of inquiries most presumably because of her appearance alongside her singer mother. Read all that there is to know about her in the write-up beneath.

Finley was born along with her twin sister, Harper on Oct 7 2008 via a C section. She weighed around 5 lbs, 15 oz while her twin sister differed from her by some ounces. The now 14 years old Finley and her womb mate, Harper are the first child of Michael Wood while the twins are the third for Lisa.

Marie delivered her and Harper at Las Robles Hospital and Medical Center in Thousand Oaks, California. They were delivered at around 2:46 pm. Their grandmother, Priscilla described their arrival as ‘a dream come true.’

Sometime after they were born, Lisa while talking to Hello Magazine said she had never been happier. The Dirty Laundry singer further revealed how Michael and she just spent their days staring at Finley and Harper in “amazement, absorbing anything and everything they do.”

Finley’s Mother Had Trouble Conceiving Before Giving Birth To Her

When Finley Aaron Love Lockwood and her sister Harper were just 3 months old, their mother, Lisa when talking to Hello Magazine, revealed she really wanted to have her twins. But she reportedly struggled for two years before she conceived Finley and her sister.

Marie said part of the reason was her blood at the time was too thick and would clot faster. This apparently also caused several miscarriages. She eventually had to take blood thinners in order to conceive Finley and Harper.

Explaining the journey of her third pregnancy, Marie told People,

My blood was too thick and would clot, which caused several miscarriages. The moment I took blood thinners, I got pregnant.

Life after the birth of her twins, Lisa at the time said was ‘chaotic bliss.’

From her maternal grandfather Elvis Presley, Finley’s ethnicities include German, Scottish, English, Scots-Irish, French Norman, and Jewish. Allegedly one of her distant ancestors is also from Cherokee.

Likewise, her maternal grandmother, Priscilla herself is of descent from Norwegian, Scots-Irish, and English ancestors. Finley partly is also of Irish, Swiss-German, remote Dutch, and Danish descent.

Finley Lockwood Grew Up In England

Sometime after the birth of Finley and her twin sister, Lisa moved to England. As a result, Finley and Harper spent some early years of their life in the cold climate of the UK.

At the time, explaining the reason behind her move, Lisa said it was the enriching and fulfilling quality of life, civility, culture, people, and friendliness that made her leave California and stay in London.

The SOB singer said the self-absorbed nature of LA also made her leave the states. On the other hand, when she moved to the UK, Marie said, she was getting flowers and notes from people.

While Marie raised Finley and Harper in England, the Now What artist didn’t prefer to send her daughters to school right away as it was popular in the county.

The mother of four at the time said she wanted her twin daughters to stay at home and spend as much time with their mother as possible.

Lockwood’s Twin Sister And Her Other Siblings

Aforesaid, Finley is a twin sister to Harper Vivienne Ann Lockwood. They are fraternal twins. Finley additionally is a half-sister to the Mad Max actress, Riley Keough, and the late Benjamin Keough. The Keoughs were born through Lisa’s former relationship with fellow musician, Danny Keough.

TMZ reports Marie’s first and only son, Benjamin died from a self-inflicted gunshot wound in July 2020.

According to insiders, the late Benjamin was the love of Lisa’s life. Benjamin was 15 at the time of Finley’s birth.

Lockwood’s parents, Lisa and Michael married in Japan in January 2006 with a wedding worth over $300,000. Finley’s parents, Marie and the Brittany Shane guitarist remained together for a total of 10 years before separating in 2016. The marriage with Michael was the fourth for the artist Finley’s mother, Lisa Marie Presley.

The Scientologist musician first married Danny Keough in 1988, a fellow Scientologist with whom she had two children, Benjamin and Riley.

Marie and Keough, however, would divorce in 1994 after which the former married the late King Of Pop, Michael Jackson. They would remain married for two years after which Finley’s mother, Lisa married the Faceoff, actor Nicolas Cage in 2002. Though this union too lasted for only about 100 days.

And it was after this the Gold-certified singer, Elvis’ daughter married Michael Lockwood.

Finley Loves Listening To Her Grandfather

When CMT in Oct 2012, asked Lisa if Finley and her sister listens to her late grandfather, Elvis’ songs, Lisa answered by saying her youngest daughters did know who their grandfather was and also loved his music. In fact, Finley and Harper also used to have a sweet reaction whenever they heard Elvis’ music playing in the public.

She though added because they were just 10, she had no idea how much they understood the multiple records holder’s music.

Marie further added while Finley and Harper’s grandfather was the American music icon, the sister duo had free reign to their own choice of music. Lisa apparently had said she wanted to impart to Finley and her sister, Harper the music lessons of their late grandfather as they grow up.

They, nonetheless, are apparently very respectful towards their late grandfather. Marie also says Finley and her siblings including Riley and Benjamin each have gotten a little bit of the late Elvis Presley in all of them.

Back when they were eight or nine years old, Finley and her twin sister, Harper reportedly found disturbing pictures and videos on their father, Michael’s computer. The allegation came from Lisa during the time when her and Lockwood’s divorce battle was still ongoing in 2016.

The Heartbreak Hotel singer’s daughter, in the documents she submitted to the court, said she discovered the images on the computer that her daughters had seen prior. After seeing them, Marie exclaimed, she was shocked and sick to her stomach.

I was shocked and horrified and sick to my stomach, had no idea that [he] had taken those photos. I will refrain from describing the photograph in detail out of respect for the privacy of my family.

said the Sinking In singer.

Her Mother Lost Hundreds Of Millions Of Her Father, Elvis’ Money; What Is Her Net Worth Now?

Considering Finley’s grandfather, Elvis’ undying legacy, and numerous hits, it’s only natural for people to think his only child inherited millions of dollars. And for some years, that was true for Lisa. After the age of 25, Lisa accrued a massive sum of around $100 million thanks to her father’s Graceland business.

However, by the year, 2018, the now 54 years old would lose all of it owing to her manager squandering millions throughout the years. She promptly fired her manager, Barry Seigel after discovering her debilitating financial status. In 2015, she only had about $20,000 in liquid assets.

Unfortunately, three years later, court documents showed Marie was $16 million in debt. The liability mostly included unpaid taxes, legal bills, and credit card debts. Some she also spilled through her extra lavish lifestyle and allegedly through a series of bad investments. Things since then haven’t been good for Finley and Harper’s mother in terms of money. So her net worth by and large has been estimated at negative figures. Her own music career hasn’t helped much either.

Finley’s mother’s debt seems even more surprising in light of her father’s estate which reportedly has a valuation worth $500 million. This is mostly because of Graceland which his widow, Priscilla opened to the public in the early 80s for visiting and other purposes. The Love Me Tender singer’s estate was making somewhere around $15 million a year. In addition, there are also merchandise and branding sales.

In contrast to Lisa, her mother, and daughter, Priscilla and Riley are still both comfortably rich with each of their net worths hanging in the ballpark of tens of millions of dollars.