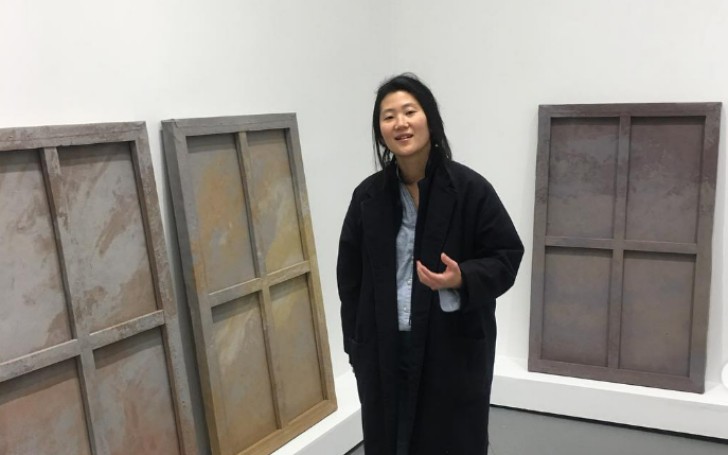 Lisha Bai is an accomplished artist who is also the founder of Studio Archive Project, an artist-run site. She was previously a visiting art instructor at Prat Institute, in Brooklyn, New York. Over the years, the veteran artist has had exhibitions around the world including Dense Mesh at Carroll/Fletcher in London.

But, on top of that, Lisha has been in the limelight as the wife of Law & Order actor Peter Scanavino. The couple who has been married since the early 2010s is also parents of two children together.

Take a sneak peek at a few other unknown facts about Peter Scanavino’s wife Lisha!

How Old is Lisha Bai? Her Childhood Details

As of 2022, her age is 43. She was born on 11th June 1979, in the United States. She is an American by nationality and has a mixed ethnical background. However, the details about her parents and early childhood are yet to be revealed.

Besides, Lisha’s husband Peter is just a year younger than her. Born in Feb 1980, Peter is now 42-year-old.

College: Lisha Is a Yale Graduate

Lisha went to Washington University in St. Louis in 2001 and later earned her BFA in Painting. She later attended Yale University and graduated with an MFA in painting/printmaking.

While still at college, Bai also gained a number of grants and fellowships including the Irving L. Sorger Award in CORE, Jeffrey Frank Wacks Scholarship, Hazel Huntsinger Memorial Prize, and more. At the time, Bai also had exhibitions at several places.

Lisha Bai is an Artist: Her Paintings Works

Lisha Bai is now the founder of Studio Archive Project, an artist-run online site that bought a curated selection of work from the studio archives of established artists. Prior to founding the site, Bai was a visiting fine art instructor at Pratt Institute, in Brooklyn, New York from 2008-16. She also worked as a visiting artist for several colleges including Legman College, Millersville University, Rhode Island School of Design Guest Critic, and more.

Furthermore, Bai was an adult program instructor at the Museum of Modern Art, New York, NY.

Lisha’s Paintings Have Been Displayed Around The World

As a skilled artist, Bai has exhibited a number of fine paintings at several artistic places from her M.F.A. Exhibition while at Yale University to her latest solo exhibition called Year Without a Summer at Klaus von Nichtssagend Gallery, New York, NY.

Her other painting credits include 183 Annual: An Invitational Exhibition of Contemporary American Art at the National Academy, Rich-oo-Uhl, The Finishers, and more.

In the year 2018, Lisha also had a solo exhibition called Here Today at Fortnight Institute.

How Long Have Lisha Bai and Her Husband Peter Scanavino Been Married?

Lisha and her hubby Peter are married for over a decade. The two exchanged their vows on 2nd July 2011.

Back in July 2021, the Law & Order actor shared a beautiful photo of the duo in the honor of their 10th wedding anniversary. He wrote,

Scanavino also stated, “Meeting Lisha is the best thing that ever happened to me. Happy anniversary!!”

Apart from posting a couple of photos together on social media, the couple hasn’t revealed much about their love life including their initial romance.

The artist is the mother of three kids with Peter, her spouse of the decade. Peter’s wife Lisha gave birth to their second child, a son named Leo in Jan 2016. Although they haven’t leaked single information about their first-born child, the proud dad Peter announced his second child’s name via his Twitter. He wrote in a photo of his newly born-baby boy,

“Welcome to the world Leo.”

Talking about their pregnancy news, it came out in late July 2015. The film director and television producer Warren tweeted,

Breaking:you won’t believe this but @PeterScanavino just checked in.He and his lovely wife Lisha expecting their 2nd in January! #SVUNursery

A few years after their second child’s birth, Bai and her spouse Scanavino welcomed their third child. Like Peter, all of his children are also huge New York Islanders fans. Back in Feb 2020, the Law & Order star posted a photo of his children wearing NYIslanders T-shirts on his Twitter and wrote,

As of 2022, Lisha resides in Brooklyn, New York with her spouse and children.

Lisha has earned a good amount of money from her painting works. She has an estimated fortune of $500,000 as of 2022. On the other hand, her long-time spouse Peter’s estimated net worth is $1.5 million.

He has earned a good amount of money from his works on both movies and TV shows.

Lisha is active on Instagram and has amassed over 2k followers. She mostly shares her paintings on her account. Similarly, the artist has also created an Instagram of her artist-run site called Studio Archive Project which has 3.4k followers as of 2022.