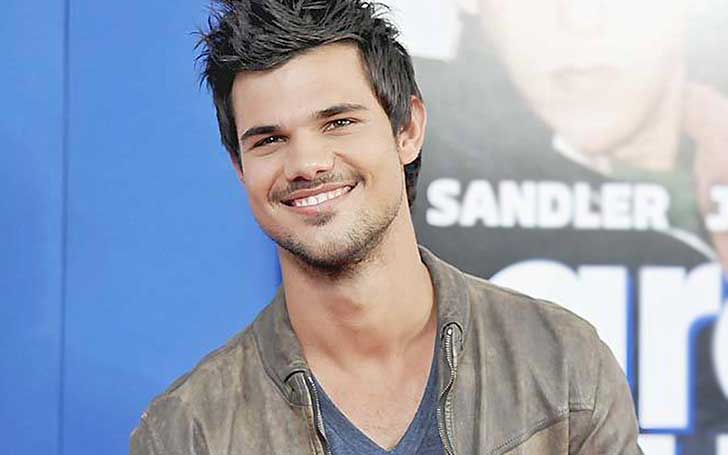 Actor Taylor Lautner is famously known for his dating history besides his impeccable acting. The 28-year-old Twilight star Taylor Lautner girlfriend includes some of the high profile of celebrities like Taylor Swift, Selena Gomez, Lily Collins, and Billie Lourd.

Let’s find out all about Taylor Lautner’s dating history here!

Lautner’s first known relationship was with his high school mate, Sara Hicks. The ex-couple dated during their school time. There are not more details about them as the relationship had ended long before Lautner rose to fame.

Even though they broke up after a short fling, they are still good friends. The former couple reunited back in 2013 when she was snapped enjoying the LA Lakers game with Lautner.

As of now, Sara is married and is a mother of two sweet daughters.

As per some online sources, Lautner and singer Selena Gomez had a fling in early 2009. The pair, who were already familiar with each other, got closer when they both were in Vancouver, Canada for filming their respective movies.

Taylor was shooting for New Moon while Gomez was working on Ramona and Beezus at the time. Their relationship ended within a couple of months.

In an interview with Seventeen Magazine in September 2009, the Wolves singer said she was single at that time. She also said that she was very happy when she was with Taylor.

Taylor-duo met for the first time when they worked together in the 2009 movie Valentine’s Day. The couple reportedly started dating in August 2009 broke up in December that year.

The reason for their separation is not known vividly. Later Swift wrote a song titled “Back to December” and released in 2010. Several sources revealed she made the song over her failed relationship with Lautner. Furthermore, the singer revealed she had ended their relationship in the song.

The 28-year-old Twilight star dated his Abduction co-star, Lily Collins for sometimes in 2010 and 2011. The Hollywood stars got closer during the filming of the movie. They started seeing each other shortly after, however, they kept it private from the media.

Their fellow Abduction co-star, Denzel Whitaker gave a subtle hint that Lautner and Collins were in a relationship during the premiere of his movie Warrior. There he said:

They were willing to go bowling. It wasn’t all about the relationship, it was more about having fun with each other.

Meanwhile, Taylor told Seventeen magazine that his relationship with Collins grew stronger as they worked together. However, he didn’t open his mouth about their alleged romance.

After a few months of the fling, the couple reportedly split in 2011. As of now, actress Collins is dating director Charlie McDowell.

Taylor Lautner dated The 100 actress Marie Avgeropoulos for short time in 2014. The ex-lovebirds met when they starred together in the 2013 movie Tracers. They dated privately for around 2-years.

At the beginning of 2015, Lautner and Avgeropoulos went on their separate ways. A close source told E! News that their separation was amicable.

Taylor and Billie Lourd-Why Did They Break-up?

Lautner and Lourd’s relationship became a hot topic on the internet for nearly a year. The pair who first met on the set of 2017 movie Scream Queens dated for around eight months before they parted their ways in July 2017.

Lourd suffered a pretty hard time when she was in a relationship with Taylor. She lost her mother, Carrie Fisher, and grandmother, Debbie Reynolds within a short span of time. Taylor remained by her side when she went through the losses. He even joined Lourd at the hospital where Fisher was being treated days before her death.

Lautner and Lourd, however, couldn’t be together for long as they ended their relationship within months. A source close to the couple revealed their breakup to People in early July 2017. The source told: ” They aren’t together anymore but they are still friendly.”

The confirmation came just days after Taylor was spotted enjoying a party The h.wood Group’s Bootsy Bellows Fourth of July event in Malibu, California without Lourd. The source didn’t reveal the reason for their break up.

As of 2020, the 28-year-old Hollywood star is dating Taylor Dome, who is a nurse by profession. It is not clear when they met for the first time, however, they were first spotted together Stagecoach Country Music Festival in April. After that, they made their public appearance a couple of times before they confirmed their romance.

The lovebirds shared their photos dressed up as members of the Tune Squad on their respective Instagram in late October 2018.

Meanwhile, Dome had previously shared a post on her Instagram giving a subtle hint that she was romantically linked with Lautner.

Did He Date Olivia Holt?

Before Lautner started dating Dome, he was rumored to being in a relationship with actress and singer Olivia Holt. The pair was reported to be an item after they were spotted walking into church together in November 2017.

As per Teen Vogue, the alleged lovebirds attended a church service before they went on to meet their mutual friends. Moreover, they later drove off in Taylor’s car.

The rumor was fueled by the fact that both the stars had just become single-Taylor broke up with Billie Lourd while Holt ended her longtime relationship with her boyfriend, Ray Kearin.

The rumor faded away in thin air as none of the stars addressed it.