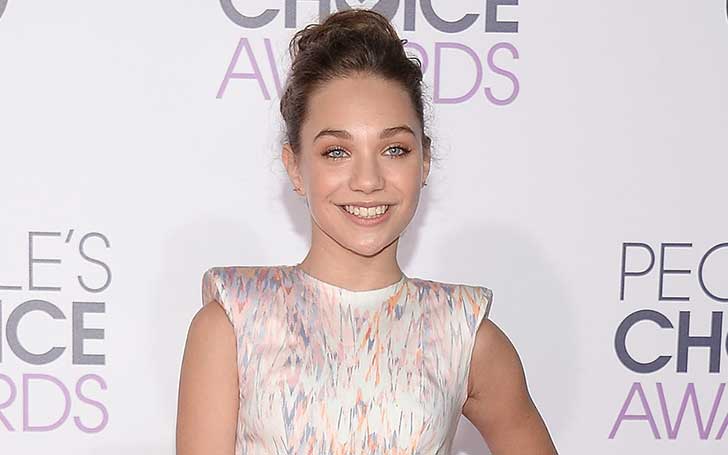 Actress, dancer, and model, Maddie Ziegler rose to fame from her appearance in the reality show Dance Moms from 2011 to 2016. Besides, Ziegler also garnered media attention for her romantic relationships over the years.

So, who were her boyfriends in the past? Is she dating anyone currently? Let’s know everything here.

Ziegler, the 17-year-old television star started dating her first boyfriend, Kenneth San Jose at the age of 14. They met on the set of Lifetime show Dance Mom in 2016 and became close friends soon.

Ziegler and San Jose’s growing closeness led their fans to speculate they were more than just friends. Moreover, their fans were convinced that they were dating after Ziegler shared Jose’s photo on her Instagram with a caption “missed him” on 19th August 2016. Here is the post:

Meanwhile, Ziegler’s younger sister, Mackenzie Ziegler commented “OTP” (one true pair) in the post which gave a subtle hint that Maddie and San Jose were going out.

However, the alleged couple never addressed their romance rumor and it faded in the thin air. Yet, Ziegler’s fans consider San Jose as her first boyfriend.

By far, Maddie Ziegler’s most well-known relationship was with the Instagram star Jack Kelly. They began their affair on New Year 2017. The pair were pretty open about their romance with their fans.

Ziegler and Kelly spent lots of quality time together and they were frequently spotted in public places. Furthermore, the couple kept on updating their fans with their photos from their romantic dates as well as trips.

When and Where Maddie Ziegler Met Jack Kelly?

Months after Ziegler and Kelly started their romantic journey, Ziegler had an interview with Galore in September 2017. At the interview, the Dance Mom star revealed she and her then-beau met six years back (in 2011) in Los Angeles.

“We met when we were like eight, and then years later we met again, and he’s from Australia, so it was kind of funny — and now we’re just dating”

In January 2018, Ziegler and Kelly celebrated their first anniversary in Jack’s native Australia. They went on a beach trip for their anniversary which the reality star also shared in since-deleted Instagram posts.

What Led The Couple to their Breakup?

Ziegler and Kelly dated for around one and a half years before they broke up in August 2018. The pair didn’t announce their split themselves, however, a close friend of the ex-couple revealed it to Confidential. The source also revealed the pair separated due to their hectic work schedule.

“They still talk and there has not been a defining reason behind it, just that it’s becoming more difficult to maintain the relationship between the distance and both their schedules,” told the insider.

After her breakup with Jack Kelly, Maddie remained single for almost a year. And in mid-2018, she started dating American singer Stevie Wonder‘s son Kailand Morris. People confirmed Maddie and Morris were dating in October 2018.

Ziegler’s representative confirmed their relationship to People. Previously, The Blast has reported they were seeing each other. The confirmation had come weeks later they were spotted enjoying a day at Disneyland along with their two other friends.

As per The Blast, the couple first met at the backstage of Dancing with the Stars: Junior as both their younger siblings; Mackenzie Ziegler and Mandla Morris was competing on the show.

Besides, Mackenzie herself is currently dating actor Isaak Presley.

In January 2019, Ziegler and Morris also starred in a portrait series by photographer Tyler Shields. They dated for a couple of more months and kept sharing their photos on social media. However, after a while, both of them stopped sharing each other’s photos. They didn’t announce their split, however, their relationship ended short.

Who is Maddie Ziegler Dating in 2020?

Ziegler is currently dating Eddie Benjamin. They started dating in 2019, shortly after Ziegler ended her relationship with her ex-beau Morris. The 17-year-old American dancer is head over heels in love with her Australian artist boyfriend.

As per the sources, the couple even lives together and they spend most of their time together at Australian singer Sia’s place.

Ziegler and Benjamin met in 2019 and later they collaborated for a short song titled Lullaby, which singer Sia posted on her YouTube channel later.

Their collaboration for the 32-second song brought them closer and weeks later, they started dating officially.