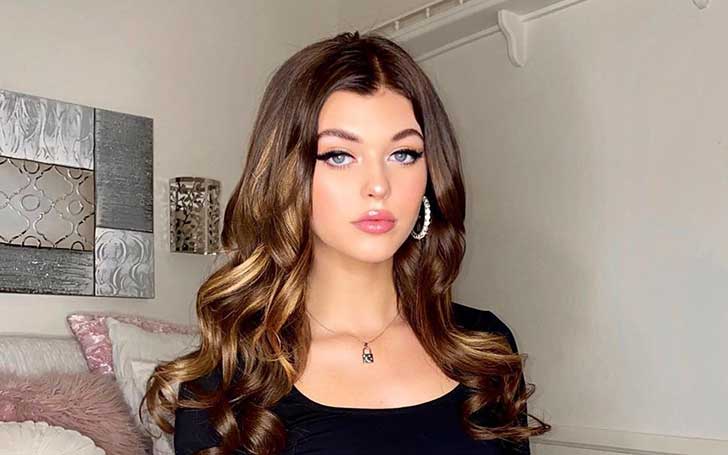 Loren Gray is an American internet personality, famous as singer and YouTuber. She is currently signed to Virgin Records and Capitol Records. Gray started her career as a TikTok star, in which she is one of the most followed artists.

Loren Gray’s real name is Loren Beech in Pennsylvania in 2002. Her father Jeremy is a biologist and her mother, Debbie is a hairstylist. Gray has a half-sibling, sister Jordan who is eight years older than her.

How Old Is Loren Gray?

Loren Gray started using Musical.ly, currently known as TikTok, in 2015, at the age of 13. She was only in 6th grade at the time and she suddenly started gaining huge followers. After she became one of the rising musical.ly stars, she was heavily bullied at her school.

Later, she moved to Los Angeles to pursue a career on social media. There she also put her steps on Instagram, Snapchat, and YouTube among others. She gradually started gaining followers across all social media platforms.

She was the Most Followed TikTok Star

Loren Gray started her journey in TikTok (musical.ly) in 2015 and quickly started gaining followers from across the world. Within a few weeks, Gray surpassed the milestone of 1 million followers.

In 2017, Loren Gray debuted as a model in a music video. Back then, she appeared in the video for her friend and British singer Hrvy‘s single, Personal. Her second music video was also for Hrvy. The couple was featured again in 2019 for his another single, Million Ways.

In 2020, Gray appeared in the music video for Taylor Swift‘s single, The Man from her album Lover. After Gray worked in the video, she took to her Instagram saying she was grateful to Taylor for giving her the chance. Here is the post:

taylor has been my ROLE MODEL pretty much as long as i can remember and i’m at a loss for words. i’m so grateful to have gotten to know her. thank you to taylor for having me be a part of this video. and thank you for sharing your heart with the world. this meant so much to me. STREAM “THE MAN” DIRECTED BY TAYLOR SWIFT🤍 @taylorswift

Loren Gray as a Singer

Besides being a leading American social media star, Loren Gray is an aspiring singer as well. She started her musical journey in 2018, signing a record deal with Virgin Records.

Later in March 2018, she released her first single, My Story. She later revealed that her first single was based on her friend who “kept falling in love with the wrong people.”

Since then, she has released five more singles viz. Kick You Out, Queen, Options, Like Like That, and Can’t Do It. Her last single, Can’t Do It featured rapper and singer Saweetie.

In May 2020, social media star and singer Loren Gray opened about her experience of sexual harassment. Sharing a video on her TikTok channel, Gray revealed she suffered from sexual assault at the age of 13.

Gray shared her experience to her 43 million followers in which she said: “This is me, over five years ago, not long before my 13th birthday.” Gray wrote alongside her photos. She continued,

“At this time, I had my innocence stolen from me in the basement of someone I trusted. I only told one person and to this day, she remains my best friend. We cried in my bathroom together for hours.”

In the video, Gray also said that it took her a couple of months to figure out why something like that happened. And after two months, she finally told her parents about her assault.

TW. when I say you have helped me more than you know, I truly mean it.

Gray also said that she was always afraid of telling her story to people because of the fear that people would view her differently. She concluded the video with:

“I’m 18 now, and I’ve realized that my past does not define me. It was never my fault, and I never deserved it. I came out stronger and I’m so proud of myself. There is light at the end of the tunnel and if my story can help even ONE person, then to me it’s a story worth telling.”

Starting as a musical.ly (TikTok) star, Loren Gray has seen success in various different fields including singling and vlogging. Besides the immense fame, Gray has also earned a hefty riches as well.

As far as the current relationship status of Loren Gray is concerned, she is single as of May 2020. The 18-year-old has, however, dated a couple of men previously. Her relationship with Joey Kisluk had made a huge buzz in the media when Gray had just risen to the limelight.

Gray’s first known relationship was with internet star Joey Kisluk. They started dating in 2013, shortly after Gray started her career. They were pretty open about their romance in the media, which made them one of the fans’ favorite couples at the time.

Gray and Kisluk also ran a couple of Instagram account, in which they had garnered more than 120k followers. After less than a year of the relationship, Gray and Kisluk broke up. After their split, they deleted all of their Instagram posts.

After that Gray was briefly linked with another social media star Juwany Roman. They also confirmed their relationship publicly, however, their romance couldn’t last more than a couple of months. They split in November 2016.

In 2018, Loren Gray dated Ian Jeffrey, the brother of well-known social media star James Charles. They met for the first time in 2018 and started seeing each other shortly later. the ex-lovebirds kept their relationship relatively private from the media.

In March 2019, Gray officially announced her breakup with Jeffrey.

After Loren Gray’s break up with Ian Jeffrey, she was frequently spotted with singer Hrvy, which sparked a rumor that they were dating. They fueled their romance rumor after they shared a couple of selfies from their shopping time on social media.

They continued posting their photos on each other’s Instagram. Meanwhile, many of their fans even asked them if they were an item, however, none of them have responded to the question so far. So, we presume they are not dating at the moment.

Loren Gray Boyfriend: Is She Dating Hrvy? The History of Her Romantic Relationships