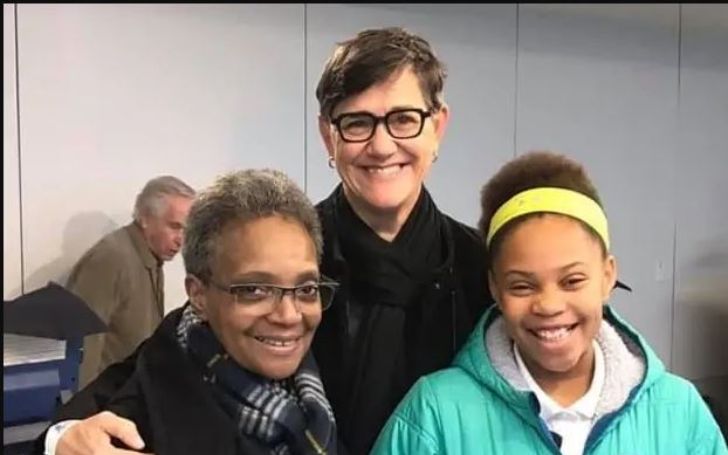 Vivian Lightfoot is the adoptive daughter of Lori Lightfoot, the current Chicago’s 56th mayor, an attorney as well as a politician. Unlike popular belief, she is not the biological child of Lori.

Vivian’s mother, a member of the Democratic Party has been serving as the Mayor of the Windy City since 2019. Pretty established is the fact that Lori is the only openly lesbian African-American woman to be the mayor of a major city in the US when she became Chicago’s head in April 2019.

The piece down below, however, looks at the youngest member of Lori’s family, Vivian Lightfoot. Get a load at some of the notable moments that include the Ohio-born attorney’s daughter along with some highlights from Lori’s political journey.

Vivian Lightfoot Parents: Who Is Her Biological Mother And Father?

Vivian was born in November 2008 in Chicago. Not much is known about her biological parents. As for her adoptive mother Lori, she spent most of her childhood in Massillon, Ohio, where her parents had settled after fleeing the Jim Crow South.

Vivian’s adoptive grandfather was the son of an Arkansas sharecropper. He reportedly had lost his hearing to meningitis but was a hardworking man.

Vivian’s parents, Lori and Amy Eshleman married in May 2014. Eshleman is from a small city in Illinois called Sterling, about 110 miles west of Chicago. She is a former manager at Chicago Public Libraries.

In June 2020, the Massilon native posted on her Instagram, referencing the fact that she and Amy had it difficult confessing their relationship not so long ago.

“53 years ago, marriages like ours were illegal. Today, I’m raising an incredible child freely and openly with the love of my life,”

Where Does Vivian Lightfoot Study?

The 13-year-old Vivian apparently studies at some private school. This, despite the fact that her mother once admitted to wanting her daughter to study in public schools.

To Logan Squarist, in Aug 2018, Lightfoot said she had hoped to provide her daughter with a community schooling experience but instead found a broken system.

“My wife and I always thought that [our daughter] would be in public schools because we’re both public school kids. But when we went to get her enrolled in pre-school, there was no opportunity because the slots were full, and the waiting list was interminably long,”

In a few or two public appearances, Mayor Lightfoot has noted her daughter has been at a private school.

The ex-employee at a private legal practice once in another interview revealed Vivian is a student-athlete but she had to put that on hold for a while because of the infamous pandemic 2020.

The former president of the Chicago Police Board affirms Vivian is quite athletic. She says her daughter is always out running track. Lori states her girl was also into basketball. She, though, at one time missed a lot of her basketball season because of a broken leg and therefore started to focus more on track.

Vivian lives with her two mothers in the Logan Square neighborhood on Chicago’s North Side.

Vivian Has Been In A Commercial

Although it is unclear if the only daughter of Lori and Amy wants to pursue acting growing up, she, for now, has already been in front of the camera, professionally. In Mar 2019 Lori Lightfoot featured her daughter in her then-new ad.

Most people assumed it was Lori’s way of attracting Chicago voters to her mayoral campaign.

The ad shows a serious Lori in her Logan Square living room, with then 11-year old daughter Vivian playing in the background.

“I’m Lori Lightfoot and I’m running for mayor for our daughter’s future and all Chicago’s children,” the supporter of LGBT says. Playing in the background is light music when Vivian sneaks into the background with a sheepish wave.

After that Lori utters,

“That’s why nothing will distract me from bringing real change to Chicago by breaking the grip of Ed Burke and the corrupt political machine.”

Meanwhile, Vivian is grooving in a dance form known as flossing.

While being a politician, Lori has her fair share of haters, criticizers, and followers. And for this particular incident of the African-American attorney, someone close to her turned on their cold face. Though it’s rather in an inconsequential manner.

In May 2020, Mayor Lori Lightfoot’s decision to showcase her dance moves in a TikTok video announcing Chicago’s virtual citywide high school graduation ceremony was all gaining attention on social media.

It, however, didn’t go over too well in her own household. During a taping of the CNN podcast, The Axe Files, the mayor told host David Axelrod her then 12-year-old daughter Vivian didn’t like the video one bit.

The particular reason Vivian bore annoyance towards her mother over the issue was that the lawyer turned politician opted to do TikTok with someone else rather than her despite Vivian’s constant urge to her.

“She’s obsessed with TikTok. And she’s been trying to get [wife] Amy and I to do TikTok with her. And I’m like, `No. I’m not doing that. When I came home that night and said, `By the way, I just did my first TikTok, of course, her reaction was, `I can’t believe you did it with someone else and you didn’t do it with me.’ Such is the life of a 12-year-old,”

How Vivian Lightfoot’s Mother Made It Her Way To Chicago Mayor?

Vivian’s mother, Lori Lightfoot used to be a practicing attorney at the Mayer Brown law firm, serving a wide cross-section of clients.

She would serve the role until 2002 after which she became chief administrator of the Chicago Police Department Office of Professional Standards, a now-defunct governmental police oversight group. Then in 2004, Vivian’s politician mother moved on to work in the Chicago Office of Emergency Management and Communications.

For the next ten years or so, she executed private practice, served on the boards of the Illinois chapters of NARAL and the ACLU.

During those time, she also served as external counsel for Bank of America. In 2013, the one time US Attorney was a finalist for the position of U.S. Attorney for the Northern District of Illinois.

In 2015, she returned to the public sector. Three years later, in May 2018, Lori announced her candidacy for Mayor of Chicago in the 2019 elections.

Amy’s spouse won the runoff election on April 2, 2019, becoming mayor-elect of Chicago. After that, she became the city’s first black female and openly gay mayor-elect.

The ex-chair of the Chicago Police Accountability Task Force won more than 73% of the overall vote in the runoff, winning in all 50 wards of the city. The mother of one won all but 20 of the city’s 2,069 voting precincts.

Although Lori’s work mostly aims for the service of people rather than profiting off of it, the 59-year-old mother of Vivian has largely been reported to be a millionaire with her net worth standing at least above million dollars.

Though the numbers vary to a certain extent depending from analysts to analysts. To say it with a bit of perspective, Lightfoot allegedly rakes in the bracket of $400,000 to $500,000 from her mayoral jobs.