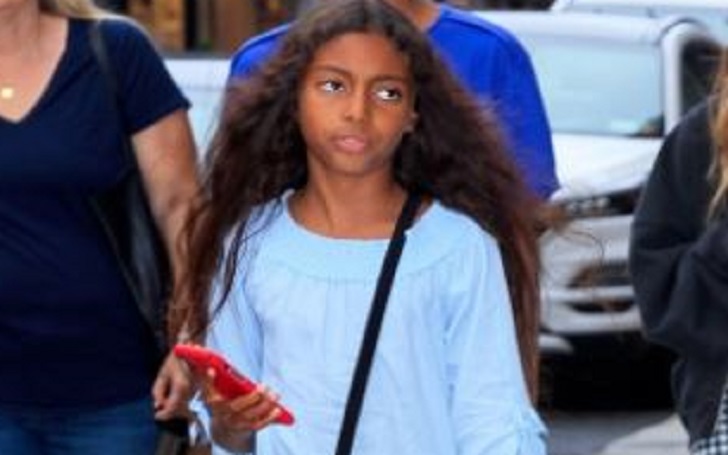 Lou Sulola Samuel is the daughter of model Heidi Klum and singer, Seal. Both of her parents are quite famous in their own way. While her mother Heidi is a former supermodel, her father is an Award-winning singer.

Having famous parents is a perk that’s limited to few people. However, many people also expect a lot when you are a star kid. Likewise, fans from both her parents’ sides are always curious to know if she is always following in one of her parent’s footsteps or not.

Today let’s take a look at the life of Lou Sulola Samuel and find out what is she up to these days?

She was born on October 9th, 2009, in Los Angeles, California. The only daughter between the former pair Heidi Klum and Seal, Lou belongs to the mixed ethnicity. While her dad is of Nigerian and Afro-Brazillian ancestry, her mom comes from a German background.

The star kid was born in the United States, however, both of her parents have different nationalities of English, German, and American. Either way, Lou’s nationality cannot be ascertained as of yet. She is eligible for all of the aforementioned nationalities.

How many siblings does Lou have?

In addition to her biological siblings, she has one half-sister, Helene ‘Leni’ Boshoven Samuel, born on May 4, 2004. She is the only daughter between Heidi and her former partner, Flavio Briatore. Even though Leni has a different father, her mom has said time and time again that Seal is her real father.

At the time of Helene’s birth, her biological father wasn’t available, however, Seal was present. Goes on to show that blood can only run so thick. Moreover, Seal also officially adopted her daughter Leni which now makes him a father of four.

All four of them are incredibly close with each other. Heidi has made sure her family is always in harmony with themselves.

Her mom and dad were married from 2005 to 2014. They exchanged vows on May 10, 2005, in an intimate ceremony at Seal’s villa at the luxurious Cuixmala resort near Puerto Vallarta, Mexico.

For the wedding, Klum looked radiant in a dress designed by Vera Wang. Although not much info was available about the wedding guest list, we can say their closest friend and relatives were definitely in attendance.

Previously, Seal had proposed to his girlfriend a year before in 2004 during the Holiday season. He proposed to her by taking her to a 14,000-foot glacier and gave her a canary diamond.

Since trying the knot, both of them used to renew their vows every year.

It was in 2004 when Seal and Heidi had met for the first time. They first crossed their eyes in a New York City hotel where both of them were staying. But their first meeting was something that Seal might wanna change.

You might be curious why? While Heidi who was a model at the time, was dressed like one, Seal had just got out of the gym and was in his gym shorts. Now if you’re anyone like Seal, you do wanna leave a good first impression. Fortunately, his attire didn’t pose any problem.

What was the reason behind Lou Sulola Samuel’s divorce?

Their relationship was going pretty smoothly, but there were many underlying problems that existed. For instance, according to reports, Heidi used to take care of their children while Seal was always busy.

Then in August of 2011, the paparazzi caught a moment of tension between the pair. At the time, the Samuel family was on an exotic vacation in Ibiza when we saw sparks flying between the pair. According to reports, Heidi was angry at her husband due to the fact that she was tending to their kids all day while he partied with several scantily-clad women.

Just a few months after the incident, Seal seeming put an end to their relationship by tweeting, ‘The End.’ A couple of days later on January 22, 2012, they announced their separation. Their divorce was finalized in October of 2014, two years since finalizing.

The custody of Lou Sulola Samuel and her siblings

Upon their separation, the pair decided on sharing the joint custody of their three kids. Even though the pair had their differences, they still kept it together for their kids. To this date, they have been quite successful in taking care of their bundle of joys.

We all know that after divorce, children are the most affected especially when they are far too young. At the time of their parents’ separation, they were not even teenagers. Fortunately, Heidi and Seal were quite mature about the separation and everything worked out well.

Nowadays, Seal and Heidi are often spotted together, but not because they are back together but because their kids hold them together.

Well, Lou is still quite young so we can’t ascertain what career path she is going to follow. That being said, she has shown a few promises in the artistic field. During the 2020 lockdown, the model shared a few photographs of her youngest daughter’s artistic skills.

In an Instagram story shared in April 2020, Lou is seen painting a giant abstract art. Going by the art which she drew, it seemed as if Moreover, she was also joined by her older half-sister, Leni.

To be honest, the painting looks absolutely majestic. Who knows, Lou might become a great artist someday.