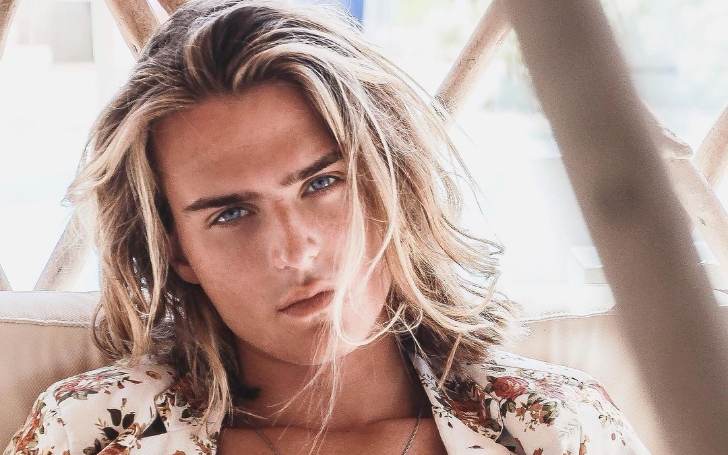 Luke Eisner is a popular American actor, Entrepreneur, social media influencer, and musician. He is best known for his portrayal of the character Stig Mohlin in the Netflix series Tall Girl which narrated the story of Teen romance.

Similarly, despite coming from a business family, he always aspired to be a musician. With a keen interest in music, he drove to Los Angeles, and the city helped him bag a modeling career. In the city, he also formed a band named Voila and later, joined the acting field, and rose to prominence due to his acting skill. Being such a talented and well-known artist, millions of people are his followers and want to know about him.

So, today we have prepared to tell every known and unknown detail about Luke Eisner including his age, girlfriend, family details, Instagram, and many more.

How Old Is Luke Eisner? Know His age And Wiki

Luke was born to his father Bill Eisner and his mother Denise Eisner on August 1, 1996, which made him 26 years of age as of 2022. He is originally from Madison, Wisconsin, the United States, and his birth sign is Leo.

He grew up in his hometown in Wisconsin and spent a lot of time with his parents.

Similarly, as for his academics, he completed his school-level studies at Greendale High school. Afterward, he enrolled at the University of Southern California, Thorton School of Music.

Besides, he belongs to the Caucasian ethnicity as his mother is of Norwegian ancestry and his father is Swedish. He is American as per his nationality.

Luke Eisner’s Family Background: Details On his Grandparents And Parents

Luke’s grandparents, William Eisner (aka Bill Sr.) and Elaine Eisner co-founded a company named Milwaukee’s advertising industry. The company was established in the year 1959 at the Hales Corners.

After William’s death, the company was taken over by his son (aka Luke’s father, Bill) who changed the company’s name to Nonbox in 1999. The company is a well-known advertising company that built a political advertising business along with the VIP personality Scott Walker, a former Wisconsin Government.

On November 12, 2019, Eisner’s beloved father bid a final goodbye to the world after his long battle with cancer. He was a prominent advertising entrepreneur who served the company founded by his parents for 45 years.

On his demise, his mother, Elaine Eisner who also passed away on December 22, 2019, posted some words for her late son on her Facebook. She wrote,

“During the almost 6 years of his battle with Cancer, he suffered a great deal of pain, but he never complained. He fought a good fight to the end. He left a big void in our lives, but his memory will live on until we see him again.”

“I am so heartbroken to say that my dad passed away last week. Not only is this the loss of a father but also of a best friend. I hit the Dad lottery and had a beautifully close relationship with him. God how I love him…………..”

Luke Eisner Started As An Entrepreneur

He started his professional career at a very young age when he was still in junior high school in Greendale. As reported by the Milwaukee Business Journal, he first began as a helper to his cousin who at the time was the owner of a wedding DJ service, Sound by Design in Wisconsin.

Later, with the money he earned from Sound by Design, he founded a company named Luke Eisner DJ & Lighting LLC which focused on playing club-style music at party functions and school events. For his brilliant work at such an early age, he was rewarded with the 2013 Young Entrepreneur of the Year.

Luke Eisner Is Also A Musician and has his Own Band

If you guys are asking, can Luke Eisner sing, then yes, he can sing and he is quite good at it. Since his childhood, Luke was interested in music. His interest in the field became all the more clear after his grandmother’s post on her Facebook on September 30, 2012, that said, “Luke- a Piano Man”. Further, his entrepreneurship which we mentioned earlier was also connected to music. Following his childhood passion, he studied music at the University of Southern California.

Further, after his graduation in 2018, he formed a band named Voila, an LA-based pop-rock duo, in association with his music classmate named Guss Ross. The band released its first song in 2018 titled “Don’t”, which spoke about toxic relationships.

In the band, Eisner is the guitarist and lyricist. The band is hugely praised by the audience and the media like Billboard, Pandora, BBC Music, and Live Nation’s “One’s to Watch.

Luke Eisner’s Career as A Model: Know In Detail

Prior to the formation of his band named Voila, Eisner was already in the modeling field. After he moved to Los Angeles to study, he got a chance for modeling due to his extraordinary looks. At the time, he signed with IMG Models.

Similarly, with his contract with IMG, he rose as a prominent model which led him to participate in several campaigns with international brands like Ralph Lauren, American Eagle, Calvin Klein, H&M, Revolve, and Stuart Weitzman.

Luke is famous for Tall Girl: Has he appeared in other movies?

In the year 2019, he started his journey in the acting field with his first appearance in the TV series The Goldbergs as Evan Dando. The same year, Luke portrayed a major character named Stig Mohlin in the Netflix series named Tall Girl which made him much more popular as an actor. In the series, he appeared alongside Ava Michelle, Griffin Gluck, and Ciara Wilsey to name a few.

Further, he also did a project like Family Reunion and Tiger. Currently, in 2022, he again appeared as Stig in Tall Girl 2 which is already out on Netflix.

Luke Eisner Is In Relationship: Who Is His Girlfriend?

Luke has been in a relationship with a lady named Kirby Johnson who is a dancer and a model by profession. Eisner for the first time posted the video of him and his girlfriend, Kirby on his Instagram on November 10, 2019. Since then, he keeps sharing beautiful pictures of his girlfriend on his social media account.

On Valentine’s day, he shares beautiful photos with his partner with a caption,

I miss you even when you are in the other room. My life is a dream and your smile is the anesthesia keeping me in it. Of all the things I’ve been fortunate enough to do in my life being your boyfriend (and Instagram photographer) takes the cake.  I know her well enough to know that’s the best Valentine’s gift she could ever receive ❤️ @kirby_j

Luke is so in love with his lady love that he even wrote a song for her. On July 16, 2022, he wrote on his Insta account,

New song DROP DEAD GORGEOUS out now! @wearevoila ! Wrote it about my girlfriend and then got to do the video with her! @kirby_j

The couple together has a Youtube Channel named Kirby and luke Diaries in which they upload videos of their everyday life with each other.

One time they shared a video in which both of them reacted to Luke’s movie, Tall Girl 2’s trailer.

A Tall Girl actor is hugely active on all the social networking sites. He is on Instagram under the username @lukeeisnerofficial with 638k followers. Further, he also has a Facebook account with 1.9k followers.

Likewise, he alongside his girlfriend Kirby appeared on his Youtube channel named Kirby and luke Diaries which has 30.2k subscribers. He also has a TikTok account with 379.7k followers.

At such a young age, he has been flourishing as an actor, band member, and entrepreneur. So, for sure, he has amassed a lot of amount from his professional career. As a result, he has an estimated net worth of around $2 to $3 million.