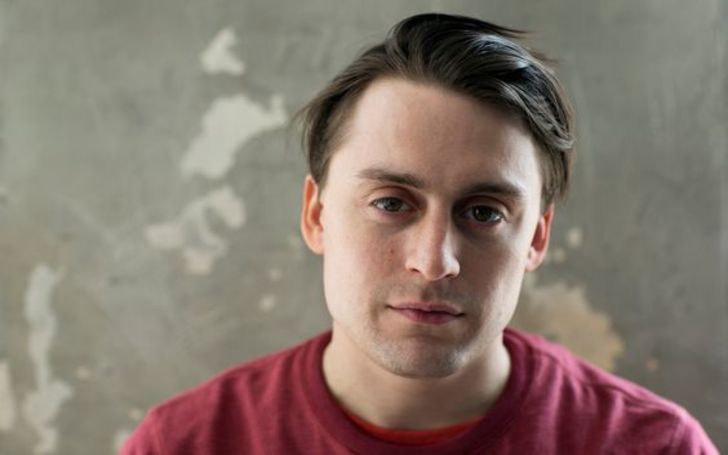 Kieran Culkin is the brother of Macaulay Culkin who is famous for his role of Kevin McCallister in the blockbuster Christmas franchise, Home Alone. While Macaulay’s performance in Home Alone is unforgettable, perhaps something worth remembering or noticing in the films is the annoying siblings of Kevin. And it’s not Buzz we’re talking about. Rather it’s Fuller McCallister, the dorky younger cousin to Kevin (played by his real-life brother, Kieran Culkin).

Yes, few knew the devilishly cute face with big glasses was Macaulay’s own real-life brother. Additionally, Kieran was noteworthy on his own through his appearance in the 2002 comedy-drama film Igby Goes Down.

However, as of the recent, Kieran’s Emmy nomination performance in HBO’s hit series, Succession has finally stood him apart from his brother’s spotlight. So know his early journey, his relationship with his brother as well as his personal affairs.

Kieran’s father, Christopher Cornelius “Kit” Culkin, is a former actor known for his productions on Broadway and is the brother of actress Bonnie Bedelia. His mother, Patricia Brentrup stayed with Kit for 21 years from 1974 to 1995 but they never married.

During his early childhood, Kieran’s family lived in a small apartment. Patricia was a telephone operator and his Kit worked as a sacristan at a local Catholic church. Kieran presumably followed Roman Catholic while growing up with Macaulay and his other siblings.

Kieran and his brothers used to watch wrestling. With Vanity fair, he remembered watching Macho Man versus Brutus ‘the Barber’ Beefcake, and then he, Shane, and Mac would imitate those matches.

His Family Struggled Financially: Never Had Good Relationship With His Father

Homelife was unpredictable for them, with the family constantly struggling financially, and the children not always going to school. The Culkin family lived in an NYC tenement railroad apartment (on East 94th Street and Second Avenue) with no separating doors, except for the bathroom, which didn’t have a lock. They lived there for nine years.

Kieran’s mother was the glue that kept it all together in the face of Kit’s anger, abuse, and his eventual extended disappearances. He said he never used to be happy whenever his dad returned home.

Their caretaker and mother used to laugh upon noticing the Culkin kids never asked, “Where’s dad?” even after months of his absence.

As per Marc Maron’s WTF podcast, Kit was a domestic tyrant, terrorizing his children with punishing threats and humiliation

Kit Culkin and Brentrup were in a relationship for 21 years from 1974 to 1995. They, however, never married each other.

Kieran’s parents reportedly had quite a court battle for the custody of their children after their separation.

After Kit and Patricia ended their relationship, the latter married Mart D. Cox and had a daughter, Kara Cox. She now with her new family lives in Billings, Montana.

As for Kieran’s father, a 2001 article from NYMag reads he went on to have a relationship with Jeanette Krylowski. The two used to live in a two-bedroom condo in Phoenix, Arizona. Jeanette, unfortunately, died in 2017.

According to a Daily Mail article from 2016, Kit now in his mid-70s had a debilitating stroke in 2014 that left him having to relearn how to speak. He allegedly lives alone in a small house in Grant’s Pass, Oregon.

People have seen on rare occasions, sporting a long, gray patriarch’s beard and a trilby hat. When the Daily Mail reporter asked if he hears from his most famous son, Macaulay, Kit replied he doesn’t consider him a son anymore.

Rory Culkin is known for his roles in Scream 4, Lords of Chaos, You Can Count on Me, Columbus, and M. Night Shyamalan’s Signs.

Two Of Kieran’s Sisters Passed Away

Kieran’s older sister, Dakota lost her life in a car accident in 2008. Dakota who was 29 at the time got hit by a car when she stepped off the curb and in front of a moving vehicle.

His other sibling, Jennifer, who, in fact, was his half-sister passed away in 2000 from a drug overdose.

His older brother, Shane was in the 1988 production of Our Town, with the late monologuist Spalding Gray.

Kieran much like Macaulay and his other siblings got into acting quite early. His parents’ friends were running a little theater, the Light Opera of Manhattan. Kieran said at the beginning the theater people would use him and his siblings as onstage props, or that was what he used to think.

As a teenager, he would party act between lead roles in independent films and small parts in mainstream films. Kieran appeared in the Academy Award-nominated movie Music of the Heart and played the lead role in The Mighty as Kevin Dillon. He also appeared in two episodes of FX’s Fargo as Rye Gerhardt.

He Was Rejected Multiple Times For Igby Goes Down

Surprisingly, Kieran didn’t have technical training in acting to this day. He first gained standalone fame starring in Burr Steers’s 2002 dark comedy, Igby Goes Down, which would become a cult classic. Kieran, however, almost didn’t get the part. He then 18, auditioned three times for the lead role of a disaffected prep-school dropout struggling to find himself.

Director Steers and Kieran then met at a diner where the former told him he didn’t think he was right for the part. But he changed his mind when Kieran looked at the director and said, “You look like shit.” Ultimately, Steers found his bold persona right for the part.

For his role on Igby, Kieran received his first nomination for a Golden Globe and won a Critics Choice Award.

As for his adult career, he is one of the main cast members in the HBO series Succession, which began its second season in August 2019. In 2018, he received his second nod for a Golden Globe Award for Best Supporting Actor – Series, Miniseries, or Television Film for his role as Roman Roy on the show.

Culkin has also starred in Anna D. Shapiro’s revival of Kenneth Lonergan’s coming-of-age tale This Is Our Youth. He portrayed Dennis Ziegler, a wiseass 20-year-old in Reagan Era New York who gets his jollies slinging weed and berating his considerably meeker pal, Warren Straub (Michael Cera).

Who Is Kieran Culkin’s Wife? Their Wedding Details

Kieran is married to Jazz Charton. They tied the knot on June 22, 2013. Charton is a London-born former model. She was raised by a single mother, an artist, in the UK. She and Kieran first met at a New York bar in September 2012.

The Succession star told Britain’s iNews that he went up to her when the guy she was with went to the bathroom. He said if he was her boyfriend and when she said no, he asked if he could be her boyfriend. They’ve been together ever since.

In mid-2013, the couple was on a road trip around the US, when they took a break in Iowa and decided to tie the knot.

The couple welcomed their first child, a girl named Kinsey Sioux on September 13, 2019. Kieran and Charton welcomed Sioux during a full moon on Friday the 13th.

On May 20, 2021, Kieran’s wife shared they were expecting their second baby. Jazz announced the news through her Instagram by posting pictures of herself in a black flowing dress that revealed her baby bump.

Before Charton, Kieran allegedly had a brief relationship with La La Land actress, Emma Stone. Kieran went on to date his girlfriend Emma after they played onscreen lovers in the film Paper Man. They reportedly were together from 2010 to 2011. They had met on the set of Paper Man.

Kieran also had a similar forgotten fling with New Zealand actress, Anna Paquin. Paquin apparently dated the younger Culkin brother after they starred together in the 2005 off-Broadway play, After Ashley. However, over the years, the relationship became something of a thing that people would completely forget about.

His Salary On Succession

It’s no secret that starring on a television show can mean big money. And working for a series powerhouse like HBO is sure to bring you some lucrative amount of take-home pay. With its popularity ever so rising, Succession’s stars have been known to scoring massive raises.

According to The Hollywood Reporter, the announcement of a third season implied serious pay raises for the cast. As per insiders, Jeremy Strong, Sarah Snook, Kieran Culkin, Alan Ruck, Matthew Macfadyen, and Nicholas Braun are all earning the same salary, which is an estimated $300,000 to $350,000 per episode. Brian Cox, on the other hand, is reportedly commanding an even larger per-episode rate.

Previously, THR noted that most of the actors were making less than $100,000 per episode. Taking all the figures into account and if we are to sketch numbers accordingly, Kieran must have very likely hit more than a million dollars exclusively from his time on Succession. Considering the time he’s spent in the acting genre, there’s no surprise in knowing he is worth around $5million.