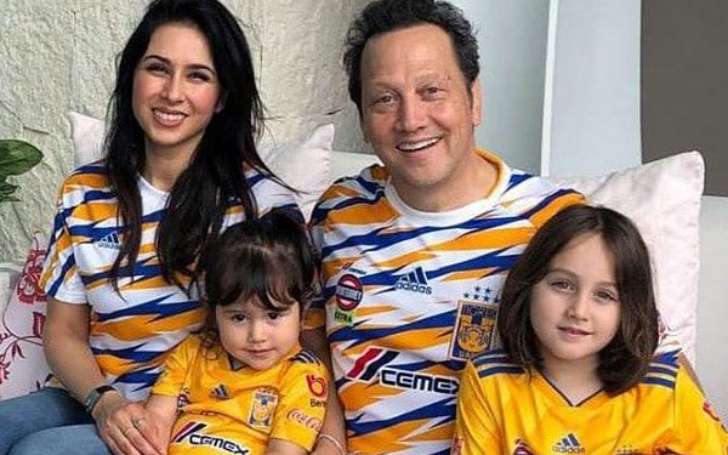 Madeline Robbie Schneider is the youngest daughter of the American actor, comedian, and screenwriter Rob Schneider (aka Robert Michael Schneider). Her father rose to fame as a stand-up comedian in the NBC sketch comedy series Saturday Night Live from 1990 to 1994. In the video of Saturday Night Live ‘The Bad Boys’, Madeline’s dad was featured alongside Adam Sandler, Chris Rock, David Spade, and Chris Farley.

Similarly, Madeline’s mother Patricia Azarcoya Schneider is also a media personality. She is a Mexican actress, model, comedian, and producer. Being the daughter of such a famous public figure, the celebrity child made several headlines the way before she was born. As a result, many of her parent’s well-wishers and fans do have curiosity about how’s inside life of Madeline.

So, in this article today, we are going to explore every inside detail of Rob and Patricia’s beautiful daughter Madeline Robbie Schneider.

How Old Is Madeline Robbie Schneider? Her Birth Details

As of 2023, the veteran comedian’s daughter Madeline Robbie Schneider is 6 years old.

She was born to her famous parents on the Wednesday morning of September 14, 2016, in Los Angeles, California, United States. At the time of her birth, she weighed 7.6 lbs which her father mentioned stating,

As she was born with a silver spoon, she is growing up in a luxurious lifestyle alongside her sibling.

Besides, she belongs to a mixed ethnical background as her father has ancestry of Ashkenazi Jewish, British, and Filipino while her mom is probably of Hispanic descent. Further, Madeline is an American citizen.

Madeline’s Siblings; She Has Two Sisters

The 6 years old celebrity child has an older sister named Miranda Scarlett Schneider who was born on November 16, 2012. As of now, her sister from the same mother is 10 years of age and she has already debuted as a child actor on the Netflix series, Real Rob (2015).

Further, she has a half-sister Tanner Elle Schneider, popularly known by the name Elle King. Born on July 3, 1989, the 33 years old Ellie is a successful singer, songwriter, and musician. Well, being the youngest one, Madeline is dear to both her older sisters. In facial appearance, she resembles more to her half-sister Elle and in this respect, once her half-siblings posted a beautiful image of them together and wrote,

In case anyone needs to see me and my 3yo sister (Madeline) twinning, here you go.

Like any other siblings, these three celebrity sibling shares a good bonding with each other. They sometimes together appear on their parent’s social media accounts.

Schneider’s Parents Are Married For More Than A Decade

Madeline’s parents Rob and Patricia tied the knot on April 23, 2011, in Beverly Hills, California. The couple married each other in a private ceremony among very close friends and family. Regarding their private marriage, Rob said,

“Patricia and I were surrounded by our closest friends and family; it was the happiest day of my life. We had a great time at the wedding and are looking forward to our honeymoon.”

Coming up to 2023, the beautiful duo has been married already for 11 years. They still share a beautiful relationship with each other which can be seen through the Insta posts they dedicate to each other.

The only reason I’m still doing what I do is because of this lovely woman
@iampatriciamaya
You make everything beautiful!
Every day a joy. And make my life a life of love and happiness.
I love you para siempre ♥️

And in the comment section, Rob’s beautiful wife Patricia wrote, “I love you too husbando ❤️“.

Her Father Rob Schneider Was Married Twice Before

Before Miranda’s parents came together, her father Rob was already married twice. He married his first wife London King in 1988. After two years in 1990, the former couple got divorced.

Likewise, the Deuce Bigalow: Male Gigolo actor again tied the knot with his second wife Helena Schneider in 2002. They were married for 3 years and eventually separated in the year 2005. Following his second divorce, he went got into a relationship with Patricia and after dating each other for a long time, they finally got married in 2011.

Madeline Is Barber To Her Father Rob Schneider; The Father-Daughter Relationship

As aforementioned, Madeline is the youngest daughter of The Hot Chick star, Rob. So, being the youngest, she is absolutely adored by both of her parents. Though she is small, the celebrity daughter is quite smart. According to her popular dad, she is excellent in every work she does, especially as a barber.

In May 2019, he shared a video of himself and his beautiful daughter Madeline in which she was shaving her dad’s beard, Rob wrote

My new barber Madeline is excellent! It’s weird she wears pajamas when she works!

Also, Madeline Robbie is very dear to her 59-year-old dad, Rob, and keeps appearing on her father’s Instagram time and again.

Though the celeb’s child keeps appearing on her parent’s social media accounts, there is no update on her whereabouts. However, looking at her age, Madeline for sure is a student in Elementary school in Arizona. In December 2020, her family moved to Arizona and settled there.

At present, she is growing up in with her loving parents and sister in her father’s luxurious new home in Scottsdale, Arizona.

As of 2023, her famous dad, Rob has an estimated net worth of $12 million. No doubt that he earned such a huge amount from his successful entertainment career as a Comedian, Screenwriter, Actor, Film director/ producer, and veteran comedian.