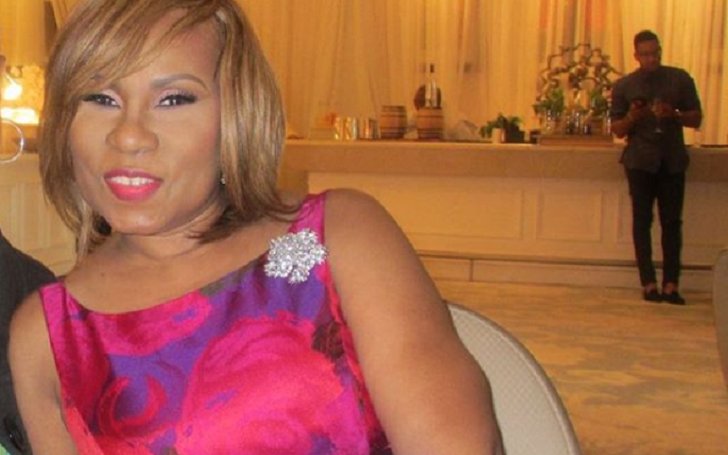 Marcia Harvey is famous as the first wife of one of the most successful comedians and entertainers, Steve Harvey. Her former husband Steve is also a renowned talk show host who currently hosts several popular shows like Steve Harvey Morning Show, Family Feud, and more. Well, in addition to being a celebrity spouse, Marcia is also an author and an entrepreneur.

The former pair shared three kids together. Since her divorce from Steve, Marcia is rarely in the media but fans are often curious to know more about her. Well, today we’ve come up with all the information you need to know about Marcia.

So, find out all about her children, her life after her divorce from Steve, and more!

How old is Marcia Harvey? Her Early Life

Born and raised in Cleveland, Marcia did her schooling in her hometown. However, the information about her parents and her other childhood details are still out of the media.

What does Marcia Harvey do for a living? What is She Popular For?

Harvey is an American author and entrepreneur. Born and raised in Cleveland, Ohio, Marcia first came to the public eye after her boyfriend-turned-husband Steve became immensely famous in the media.

Following her divorce from her then soon-to-be-famous husband Steve, the woman started living a very private life. Even so, Harvey continued to work on her passion for writing and release her first poetry book ‘MARCIA: Eyes to the Soul’ in April 2011.

The book documented the life of Marcia before and after her divorce. It was later followed by two other books ‘MARCIA: Poems From The Heart’, published in 2011, and ‘MARCIA: Thoughts From My Mind’, in 2014.

Besides, several sources suggest that Marcia runs her own fashion line. She previously used to work at a department store named, Saks Fifth Avenue prior to meeting Steve.

Marcia tied the knot with Steve Harvey in 1980, in a private wedding ceremony. She first met her then-future-husband at one of their mutual friends’ reception party. The two subsequently hit it off and dated for some time before they exchanged vows.

At the time, Steve was an insurance salesman. Yeah, that’s right! The couple goes way back, so much so that Steve didn’t even start his stand-up career.

The former couple has three children

Steve and his now ex-wife Marcia welcomed their twin daughters, Brandi and Karli Harvey in 1982. The two also have a son named Broderick Harvey Jr., born in 1991. All of them are active on social media with a considerable fan following.

Their daughter Brandi started out her career as a professional bodybuilder. She also participated in several major competitions. Furthermore, the young lady has a gift for writing. She is the author of the book Breakthrough Sold Separately: Get Out of the Boat of Mediocrity and Walk on Water.

On the other side, her sister Karli is an adorable wife and mother of a child. She married her husband Benjamin Raymond, a basketball player-turned-mentor in September 2015. They welcomed a son BJ Raymond (Marcia’s grandchild) in 2016.

Steve left his first wife, Marcia, and his children to become a comedian

As heartbreaking as it sounds, Steve did leave his whole family on the back pedestal in order to further his career. Their matrimonial relationship started falling apart when Steve switched his mind to pursue a career in entertainment, especially as a stand-up comedian.

Always a passionate entertainer since childhood, Harvey made this difficult decision after he won $50 for his performance in a local stand-up gig. When Steve decided to become a comedian, the host used to work as an insurance salesman. However, Harvey left the job the very next day He earned $50.

Marcia Raised Her Kids As a Single Mother After Their Divorce

Steve and his first wife Marcia separated after 14 years of their marriage in 1990. In the meantime, the former celebrity spouse was also pregnant with their third child, Broderick.

Following their separation, Marcia went through a lot of hardships. She raised all of her children as a single mother and became a huge inspiration to many other moms as well.

Several years after, in 2016, the now prominent comedian Steve recalled the gut-wrenching moment to People,

“I’m married, I have twins. I’m supposed to provide for them, but I had to take this chance”

His relationship with his twin daughters is also quite mysterious. They rarely appear with Steve but some other outlets report they share a close bond with each other.

Talking about his twin daughters, Harvey said when they got older they understood why their daddy abandoned the family,

“Years later they said to me, ‘Dad, we didn’t understand why you left us, but we know now you had to go. You didn’t just belong to us. You belonged to the world”

Steve also has four other children including three adopted kids (Morgan, Jason, and Lori) with his third wife Marjorie Bridges.

Their divorce proceedings came to an end after four years of their separation in 1994. After the finalization, Steve was ordered to pay $5100 a month to Marcia as spousal support.

Steve, however, didn’t pay anything and Marcia submitted an affidavit to the court. Later on, Steve was found guilty of not paying what was owed to Marcia.

Who is Marcia Harvey Married to After Divorce? Her New Husband

The ex-celebrity wife has maintained a very lowkey existence out of the public glare. Several online sources report Marcia got married for the second time to a guy named Larry Greene. But none of them has confirmed the rumors.

While talking about her husband Steve, the comedian married Mary Lee Shackelford (his second wife) on 21st June 1996. The two have a son, Wynton Harvey, born on July 18th, 1997. But, their years-long marriage also ended in divorce in late 2005.

At the moment, Harvey is happily married to his third wife, Marjorie Harvey since 2007.

Marcia Harvey has a net worth of $500,000 in 2023. She has earned a such good fortune through her various endeavors.

Besides, her former hubby Steve’s net worth is $200 million. His annual salary is $45 million.

Some Other Quick Facts About Steve Harvey’s 1st Wife