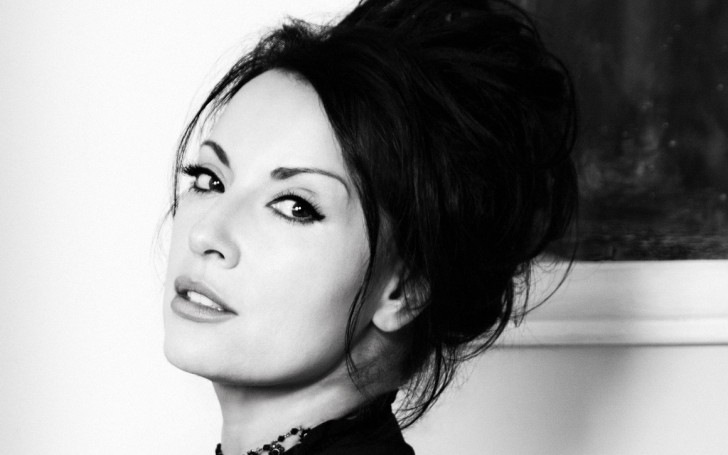 Margo Rey is a Mexican singer-songwriter, dancer, and actress. She is mostly known for her work in Beverly Hills Chihuahua (2008), Desperate Housewives: The Game (2006), and Dota 2 (2013). She is equally famous for being the ex-wife of a famous American stand-up comedian, actor, and author Ron White who is popularly known by the name Tater Salad.

Talking about her personal life, Margo was married to her now ex-husband Ron for about four years. In 2017, the pair dissolved their marital life on an ugly note and they also had a clash regarding spousal support.

Today, in this article, we are going to talk about Ron White’s ex-wife including her age, sons, career as an actress, and many more.

Margo was born Margarita Reymundo Jurado on October 18 1966, in Acapuico, Mexico. As of 2022, she is 56 years of age. When Rey was just two years old, her parents migrated to the United States in America. So, she spent most of her early life in Texas, US before moving to New York to pursue her career.

Talking about her parents, her mother Juana-Amparo Jurado was a Flamenco dancer and her father Alejandro Reymundo was a cliff driver. Since both of her parents were so fond of music, she grew up in a musical environment.

Besides, Rey has a mixed ethnicity and is a Mexican-American citizen.

She was born the youngest among the five children of her parents. Margo has two older sisters and two brothers. She said all of her siblings are successful in their careers. Her older sister whose name is unknown works as an editor-in-chief of Nexos Magazine. Likewise, Margo’s other sister named Gabriela and her brother Tony are restaurateur owners and operators.

Among her four siblings, one of her brothers Alex Reymundo is a known face in American Entertainment Industry. He is a comedian and actor who also featured in the 2007 ALMA Awards.

Margo Rey Started Singing At The Age Of 11: Career Detail

Just at the age of 11, Margo started performing on the stage. And as soon as she entered her teenage, she became the lead vocalist in Debutante, an all-female rock band in Arlington, Texas. With the band, she toured the U.S. At the age of 22, Margo released her first album titled These Boots Were Made For Walkin’.

Following her first release, she became a lead singer in several bands. First, in the early 1990s, she began singing for a power-pop band named The Ritual, but soon the contract was broken up. Then, she got hired by a Dallas venue, Sambuca. Rey also become the bandleader of a Latin Jazz/R&B sextet Miss Margo & The Lost Souls. The band then released its debut album ‘Acaba’ which gained huge commercial success at the time. The success of Acaba also led a Mexico-born singer to get a major deal with PolyGramn Latino.

Subsequently, the singer was also cast in a prominent role in the Broadway musical ‘Selena Forever.’ Later, Rey moved to Los Angeles and was signed by Abrams Artists Agency. There, she worked as a commercial vocalist for Juniper music and did some voiceover work in TV commercials and national advertising for several companies in English and Spanish.

During her long music career, Margo Rey has performed on several high-profile musical stages alongside several bands. Besides, the artist also released 3 albums titled My Heart’s Desire (2008), Get Back (Remixes) in 2010, and Habit (2012).

She Is An Voice Actress As Well

As mentioned earlier, Rey has worked as a voiceover artist in several commercial advertisements. As a voice actress, she didn’t limit herself to musical shows and advertisements but went to work in movies as well. In 2006, she gave her voice to the character Gabrielle Solis in the video Game Desperate Housewives: The Game. Then, a year later, she worked as a voice actress in the TV movie E.D.E.N.

Margo Rey Is Ron White’s Ex-Wife: Details on Their Marriage and Divorce

Margo Rey tied the knot with her now ex-husband Ron White on 13 October 2013. As for their first meeting, the former couple first came across while working together in the show  Ron White Presents: Margo Rey Live in the years 2011 and 2012.

Gradually, their professional relationship started taking a personal space and the two started dating and got married. But, their marriage lasted only for four years. In 2017, the married duo broke their marriage and split up.

With their separation, Rey filed for spousal support in California court in 2017 but her ex-husband Ron pushed it back with the statement that they were never legally married. However, Ron’s statement was dismissed by the court which ordered him to pay $25k monthly to his ex-wife Margo Rey.

Margo Rey was getting $25k monthly as spousal support since November 2019. But when COVID started spreading in 2020 and the lockdown all happened, her ex-partner Ron requested the judge to stop spousal support. He stated,

she continued her decades-long pursuit of being a professional singer at which she is not self-supporting. I have spent 200+ days per year traveling the country every year to do stand-up shows, and I made more than $200,000 per month doing it.

Margo Rey’s Ex-Husband Was Married Before

Margo is not the only ex-wife of her comedian ex-husband Ron White. Her ex-partner had 2 unsuccessful marriages before. Before Margo, he was already married and divorced twice from his ex-wives. Ron’s first wife was Lori Brice with whom he got married for 12 years, from 1981 to 1993. After that, he again tied the knot with Barbara Dobbs in 2004 and their marriage lasted for just four years.

After that, he went into a marital relationship with Margo but sadly, that relationship also didn’t last and ended in a clash.

Is Margo Rey Married Now? What about Children?

After her divorce from Ron, she has not married again. Going through her social media account, she does not seem to be in a relationship with anyone. Now talking about her children, a 56-year-old Mexican singer does not have any kids rather she enjoys the company of her sibling’s children. She also keeps uploading their photos on her social media.

Although Margo didn’t become a mother despite being married for 4 years, her ex-husband Ron White is a father of a son. He has a son named Marshall White with his ex-wife Lori.

Rey Is A Cancer Survivor: She Was Diagnosed With Cancer Twice

In the year 2009, Rey was diagnosed with metastatic breast cancer for the first time. Regarding her cancer diagnosis, she said,

“I had never been hospitalized, broken a bone or had a cavity, “It was really quite shocking.”

To treat cancer, she underwent a double mastectomy, a surgery in which both her breast were removed.

However, after 4 years in 2013, cancer showed up again and this time in her lymph nodes, for which she underwent another surgery, chemotherapy, and radiation treatments.

At present, she is living out of cancer and working hard for her career. After surviving cancer, Margo Rey started working for a non-profit organization Nooran Fraser Foundation that raised funds for women’s cancer research.

Margo Is An Animal Lover; She Is Fond Of Food As Well

The cancer survivor Margo Rey is absolutely fond of animals and food. If you go through her social media account, you can see her love for food as well as for animals. Rey often shares different food items on her Insta and keeps trying new dishes with her friends and family. She also keeps visiting the animal’s place and in her home too, she has a pet dog.

On April 2, 2021, she shared a video of her feeding her dog and captioned it,

With this caption, we can tell that she absolutely loves to be around pets and enjoys their company.

She is hugely active on Instagram under the username @margo_rey. She time and again uploads the video of her visiting animals and feeding them on her Insta.

What Is The Net Worth Of Margo Rey?

Rey must have earned a decent amount through her three-decade-long entertainment career. Most of the online media portals have stated her net worth is $20 million. On the other side, her ex-husband Ron White has a fortune of $40 million in 2022.