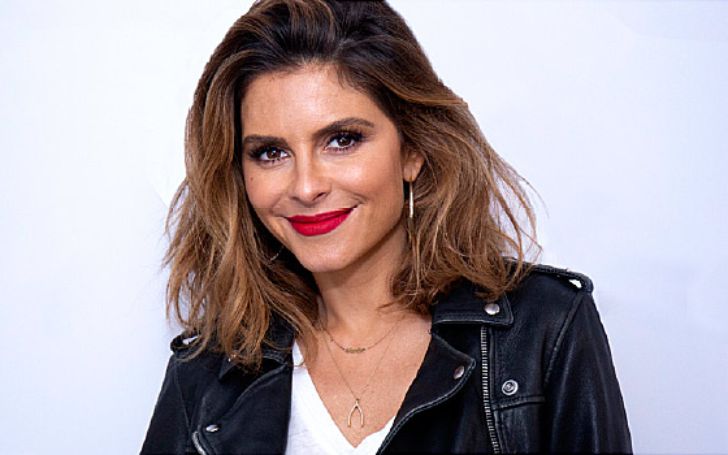 Maria Menounos is a big name in the entertainment industry famed for her work as a reporter, and the co-founder of AfterBuzz TV.

She also tried her hands in wrestling and appeared in WWE. Find out more intricate details about Maria in her biography. Also, know How is Maria Menounos health?

Maria grew up in an Orthodox Greek household. Both of her parents, father, Costas, and mother, Litsa migrated from Greece to the United States before her birth and settled in Massachusetts.

They worked as janitors at a local nightclub in Boston. Both of them were quite busy because of which sometimes Maria and her brother, Peter, had to go assist their parents.

Maria and Peter usually went to the club during the Holidays to lend a helping hand to their parents. “I remember getting to the nightclub at 5 a.m. on Christmas, so we could clean and get home fast to change.”

Maria is the elder sister of Peter Menounos born Panagiotis Menounos. Her brother was born in 1980 and currently resides in Malden, Massachusetts.

Maria’s Mother Lista Health Issue: She passed away in 2021

Maria’s mother tragically passed away in May 2021. Her mom lost her battle with brain cancer.

Initially, Maria revealed that her mom had been diagnosed with stage 4 cancer back in August 2016. Her mother was 61-years-old.

Maria shared a little progressive news about her mom’s battle with cancer on the occasion of Mother’s Day in 2019. She wrote on the photo,

Happy Mother’s Day to my beautiful mama! Little update-she continues to get amazing mri’s and her brain tumor if that’s what’s even left (could be scar tissue) is stable. Lots of work to get here but so grateful to god for giving me and my family another Mother’s Day to celebrate her! Thank you to all who have prayed for her along the way! It’s working! Coming up on 3 years with glioblastoma later this summer.

But despite all the efforts, she passed away.

While taking care of her mother, Maria’s own health deteriorated. Her MRI result in 2017 showed a golf-sized tumor pressing on her trigeminal nerve. The nerve is responsible for providing sensation to the face and controls some of its muscles.

On June 8, 2017 (her 39th birthday), Menounos underwent surgery that lasted just shy above seven-hour. However, even after the successful operation, her health became worse. She started struggling with the lingering side effects in mid-August of the same year. She often felt dizziness and had double vision for some time after the initial operation.

A year after, Maria told TODAY about her recovery,

“I feel good. There are little things, but nothing major. The prognosis is great… (my doctor) said the chances of this ever coming back are 6 percent, it’s like nothing. We’re good.”

Why is Maria Menounos famous? Why did she leave NBC?

The personality is famous for her work as a reporter/host on several TV show segments. At first, she started out as a correspondent for Entertainment Tonight from 2002 to 2005.

Numerous small-time gigs later, she landed in Access Hollywood and worked there from 2005-11 as a Correspondent. Later on, she hosted her own show, Extra in the NBC network which was a huge hit.

She left NBC after signing a multi-year contract with E! Entertainment. Likewise, she co-hosted the hit segment Live from E! from 2013 to 2017.

Take a look at Maria’s appearance at the Conan O’Brien show!

Nicknamed the ESPN of TV Talk, AfterBuzz TV was founded by Maria and her husband, Keven. It is an online broadcast network specializing in after-show podcasts.

At first, the 41-year-old was fond of talking about her favorite TV shows after the release of a new episode. Her hobby soon turned into a profession. TV series include Game of Thrones, Big Brother, The Flash, Real Housewives, and Grey’s Anatomy.

When asked about its inception, Maria maintained, “For decades, sports fans have been treated to ‘post-game wrap up shows after watching their games. There was a void out there for TV fans and AfterBuzz TV filled that gap.”

How much is Maria Menounos Net Worth?

Throughout her career, Maria earned millions of dollars. Her current net worth stands at $12 million.

On the other hand, her boyfriend turned husband, who is a producer and director has a net worth of $10 million. The couple both reside in their house located in Los Angeles, California.

Maria has always been open about her relationship with her husband, Keven Undergaro. After getting engaged at the Howard Stern Show, Maria and Keven tied the knot in a rather haste ceremony in New York, right around the 2017 New Year’s Eve.

Subsequently, a few months later, they exchanged vows yet again in an over-the-top wedding in Greece. The couple chose that location because Maria wanted to commemorate her parental heritage.

They first started dating back in 1998 after meeting while working in a film. It was love at first sight for both of them.