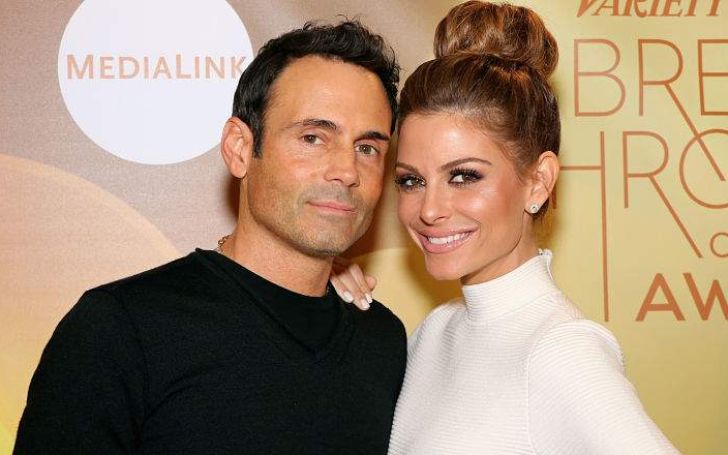 Veteran TV personality Maria Menounos and her husband Keven Undergaro are a true definition of true love. In the initial phase, their relationship was tested, yet the couple stood strong. And here we are with more than two decades of love.

Find out everything about their relationship, from first meeting to marriage and their plans for kids in the future.

We all know relationships breaks like anything in the entertainment industry but then there are Maria and Keven. The couple has been in a relationship for over two decades which in itself speaks highly of their commitment towards each other.

What’s more, they didn’t settle for marrying once and exchanged vows two times. Firstly, they tied the knot in a public wedding ceremony at Times Square, NY, on December 31, 2017. Steve Harvey officiated their wedding which was held during the New Year’s Festivities.

As if it wasn’t enough, Maria and her hubby Keven decided to walk down the aisle yet again. A few months later, they flew to Akovos, Greece, for an Orthodox Wedding. On October 6, 2018, they exchanged vows in front of their friends and family.

For the first wedding, the lovebirds wore a rather simple dress. Maria looked dazzling in an Atelier Pronovias mermaid gown. The dress featured a detachable coat and long sleeves. On the other hand, Keven looked sharp in a black suit with a bowtie.

Now for their destination wedding in Greece, Maria went overboard and bedazzled everyone with her dress.

She donned Celia Kritharioti’s off-the-shoulder wedding creation made from silk organza. Furthermore, the dress had hand-painted flowers and a veil made from silk tulle. Meanwhile, like before, Maria’s husband Keven looked dapper in a black tuxedo.

It was the Howard Stern show which gave Keven and Maria the dream of making it big in the industry. Fast forward 19-years and the duo got engaged in that very show. A remarkable turn of events isn’t it!

On March 9th, 2016, during their appearance at the show, her then-future-husband Keven went down on his knees and popped the big question. To Keven’s delight, his girlfriend of 19-years said, ‘Yes.’

He proposed her with a seamless halo ring exclusively designed by Jean Dousset. The beautiful ring features a brilliant-cut stone set surrounded by 220 carefully placed brilliant-cut diamonds set in platinum.

Maria Froze Planning for Children: Looking for a Surrogacy or IVF Treatment

Celebrities tend to be quite busy with their lives that they often forget to plan for kids before it’s too late. Maria knew about it and before things got out of hand, she took the initiative to freeze her eggs.

In November 2014, Maria had three embryos made for the sole purpose of becoming pregnant later on. The step came after her doctor told her that she wouldn’t be able to bear any kid due to the birth control pill’s adverse effects.

Upon hearing this, the 42-year-old whole life turned upside down. As a last resort, she opted for acupuncture treatment, which miraculously worked. Subsequently, Mania’s doctor advised her to freeze her eggs.

Likewise, Maria froze two more eggs in June 2016. Her doctor tested all five of the eggs and revealed two of them are bad apples, one is fair, and two are in excellent condition. She also found the gender of the kids.

We all know Keven is a dotting husband and life partner. The American producer stated he desperately wants kids but not at the expense of his wife’s health. He stated,

“We definitely want children. But I’m very concerned about her going through a pregnancy, and I would like to explore [using a] surrogate because her body has been through hell. I want a baby desperately, but I don’t want it to be at the risk of her health.”

He is the true definition of a caring husband.

Maria Menounos and Keven Undergaro Inspirational Relationship: Once Disowned By her Father

Maria and Keven went through a lot of hardship to get where they are today. If it wasn’t for the countless sacrifices the lovebirds made, we wouldn’t be seeing them as husband and wife here today.

Initially, Maria’s father, Costas Menounos disapproved of her relationship with Keven due to the fact that he isn’t a Greek. When the AfterBuzz Tv co-founded insisted on dating him, her father went as far as to disown her.

Right after the incident, Maria and Keven moved to a small unfinished basement. There the duo lived with three other people and survived on minimal funds.

This was a huge setback for Maria but at that time, Keven stood by his girlfriend’s side. Slowly and steadily, the lovebirds persevered and got her father to approve their relationship.

How and When did Maria meet Keven?

It was back in 1997 when Maria, a college student at that time met her future husband. The E! News host was shooting for a film in Boston and Keven happened to be working there.

The early reaction for both of them was similar. Maria knew from the get-go he is one after laying eyes on him, and the same goes for Keven. When the movie wrapped up, they had difficulties saying goodbye despite knowing each other for a few days.

Although Keven had no idea why he felt this way, Maria knew about it. She wanted to marry the guy and decided to make him fall in love with her. Lucky for her, it all went according to her plan and the blissful couple is living happily ever since.

All about Maria Menounos: Details on her Wiki, Parents, Wedding, Mother