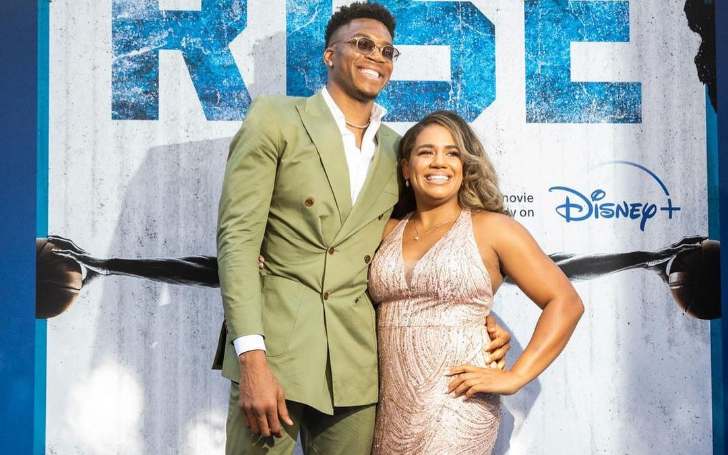 Mariah Riddlesprigger is an American former volleyball player best known for being in a relationship with a professional basketball player Giannis Antetokounmpo (nickname: Greek Freak’). Mariah’s boyfriend, Giannis plays basketball for the Milwaukee Bucks of the National Basketball Association (NBA) and is famous as one of the most decorated players in NBA history who won NBA Most Valuable Players Awards two times in 2019 and 2020.

Apart from her relationship with Giannis, she herself was an accomplished Volleyball player. With her excellent records in Volleyball game, she earned a title like Scholar Athlete’ and the ‘Junior League Senior Girl Athlete Award. In her senior year in high school, she was named ‘Conference USA Defensive Player of the Week. However, lately, she seems to have left playing volleyball. Well, what is she doing at present? Is she planning to marry Greek Freak?

Today, in this article, we are going to explore every known and unknown detail about Giannis Antetokounmpo’s partner, Mariah Riddlesprigger. Have a close look.

How Old Is Mariah Riddlesprigger? Her Age and Parents

As of 2022, Mariah is 30 years of age. She was born to her parents on September 17, 1992, in Fresno, California. She spent most of her early life in her hometown with her parents and siblings.

Talking about her parents, her father Patrick Riddlesprigger is a former basketball player who played basketball for Fresno State University. Further, Patrick also served as an athletic manager for Fresno Unified, the third-largest school district in California. On the other side, Mariah’s mother Catherine Riddlesprigger is a housemaker and a regional sales manager for Allstar Fire Equipment, Inc.

Besides, she belongs to the African-American ethnicity and is American as per her nationality

Mariah Was A High School Volleyball Player: Her Educational Details

A Fresno native went to Bullard High School in her hometown. During her study period in Bullard, she not only carried forward her education but emerged as a skilled volleyball player. At the time, Mariah played for coach Kieran Roblee. For her great playing skill, she was honored with Scholar-Athlete and Junior League Senior Girl Athlete Awards.

After graduating from Bullard in 2010, she enrolled at the Lovett College of Rice University in Texas. At university, she studied BA in Sport Management and Sociology. She also did a minor course in Business.

As mentioned earlier, Mariah has two siblings named Makayla Riddlesprigger and Maya Riddlesprigger. Makayla, her first sibling was born on February 20, 1999, and is 23 years old in 2022. Likewise, her younger sibling Maya is 22 years old in 2022. Both Mariah’s sisters are Volleyball players just like her and played volleyball while studying at Central High School, Fresno.

Career: What Job Does Mariah Riddlesprigger Do?

In 2022, she is a founder of a clothing brand named Sincerely Mariah, which she launched on May 2021. Her founded brand is all about the collection of loungewear pieces embellished with a message like ‘Uniquely made’,  ‘Undeniably Worthy’, and ‘Unapologetically Me.

In an exclusive talk with Wisconsin Rapids Daily Tribune, she said the major purpose behind her brand is to build others up. She said after being a mother, she started feeling inadequate and imperfect. She stated,

“I was losing myself trying to be this perfect person, and nobody can be perfect,”

“I felt like, especially with everything going on in the world today and lately, more people need more positive messages and less negativity,” I just thought it was a good time to go ahead and embrace that.”

From this, we can say that her only purpose to create this brand is to boost confidence in people and to help them to see perfection in their imperfections. And with this, she is hoping that some positive changes will happen. In this regard, Mariah added,

“I really just hope that everybody who’s purchasing just embraces the true meaning and that they just truly, truly remember to love themselves and love themselves for who they are, “That’s the biggest thing for me. I really want to help people and help others feel more confident and feel more loved.”

Where Did She Start Her Career?

The now-clothing brand founder Mariah began as a professional when she was still at Rice University. She started as a ticketing officer at the University’s athletic department. Later, from 2015 to 2016, she remained as the basketball operations intern for the basketball team Philadelphia 76ers.

Subsequently, with her internship at the Philadelphia 76ers, she got to meet with several high-profile sports personalities. She said,

At that time, she thought, meeting with all these high-profile people will eventually help her to achieve her career goal to work with a sports agency.

Mariah Riddlesprigger Is In Relationship With Giannis Antetokounmpo: Are They Married?

Coming up to 2022, Mariah is dating her boyfriend Giannis Antetokounmpo. The couple has not shared vows till today however it has not stopped them to live as a beautiful family together. Both the couple keeps sharing each other on their social media, especially when there is a special occasion like a birthday or Halloween day or others.

Time and again, they keep traveling with each other to many beautiful places. They love to spend time together and as a partner, the duo has been in great shape. On March 24, 2019, Giannis shares their post together with a caption

From this, we can assume that Giannis greatly admires the love of his life Mariah and in the same way, Mariah is a big supporter of Giannis’ career.

How Did Mariah And Giannis Meet?

As per reports, Mariah had her first meeting with her now-boyfriend when she was doing an internship at the NBA. It was between 2015 and 2016 when they started seeing each other. Sources say, before the public announcement, the couple dated for about a year.

And finally, on December 31, 2016, Giannis for the first time shared his togetherness with his girlfriend Mariah on his Instagram captioning,

Happy New Years from us!

Since then, the couple is together and at present, they are in a live-in relationship.

From her love life with a Milwaukee Bucks player, Mariah is a mother of two sons named  Liam Charles Antetokounmpo and Maverick Shai Antetokounmpo.

Her first son Liam was born on February 11, 2020, and is 2 years of age in 2022. On his second birthday, his mom Mariah shared a cute photo of Liam leaning on her baby bump and captioned it,

My baby boy is TWO today! HAPPY BIRTHDAY to my mini best friend & the sweetest brother in the world. I pray your heart always stays kind and your love for others continues as you grow. Mama loves you sweetheart, forever and always! 💛

With one year gap, she again gave birth to her second son Maverick in 2021. She announced the addition to her family in September of the same year. Likewise, on Sep 28, 2021, as a proud mom, with an adorable picture of her both sons together, she wrote,

My boys 💛 Being your mama is my greatest joy!

I hear it’s national son’s day and I’ll take any chance I get to celebrate you two little sour patch kids!

At present, she is living a beautiful life in a family of four, with her partner and her two beautiful sons.

Mariah Is Also Involved in Charitable Work With Her Boyfriend

After becoming a parent, both the individual Mariah and Antetokounmpo, as a pair are involved in charitable work which specializes in the children and they believe in The BIG GIVE Back. In 2021, both of them announced that they are going for a fundraising program for a non-profit organization Milwaukee Diaper Mission.

Have you heard the news?! In celebration of the birth of our second son Maverick Shai Antetokounmpo, @giannis_an34 and I are leading a diaper drive and fundraiser to benefit Milwaukee Diaper Mission! We are asking for your support so that we can provide more clean diapers to Milwaukee area children and families struggling with diaper need.

Since then, the pair is still working on a fundraising program for the organization.

A 30-year-old former basketball player is hugely active on Instagram under the username @sincerelyymariah. On her Instagram, she has shared her family moments, her sons, and her partner. Aside from that, Riddlesprigger has also promoted her clothing brand on her Instagram. Further, she has used her Insta for a charity cause as well.

Similarly, Mariah is also on Facebook by her own name. Also, she is on Twitter under the username @mariahdanae15.

Well, she has an estimated net worth of around $100k. As a business person, her wealth is expected to increase further in the near future. On the other side, her boyfriend Giannis has a fortune of $ 70 million.