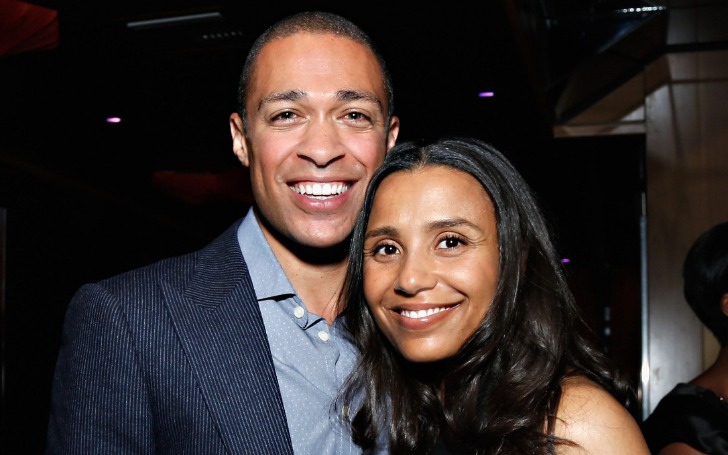 Marilee Fiebig is a former immigration attorney who is widely recognized for being the wife of an American journalist and national TV personality T.J. Holmes (aka Loutelious T.J. Holmes, Jr). Her husband rose to prominence as an anchor and correspondent for CNN and an anchor for ABC News.

At present, her husband, Holmes is in the headlines following the public disclosure of his romantic relationship with his GMA3 co-host Amy Robach. In the midst of all rumors and allegations of an extra-marital affair on her better half, reports of their separation have also surfaced in the media. Well, what is the truth?

Today, let’s find out everything about Marilee and her husband’s relationship. We will also put light on her spouse’s rumored affair with his co-host Am. Let’s start.

Marilee Fiebig Is Originally From Congo; Her Early Details

Talking about her childhood, she was raised by her parents in her hometown until the age of five. After that, Fiebig’s family moved to the United States. Regarding this, in an interview with Marie Claire, she told,

“Our family moved to the United States when I was 5 years old because my mom wanted my siblings and me to fully take advantage of the educational opportunities that she didn’t have growing up in Africa,”

As for nationality, Fiebig is American and belongs to the Afro-American race.

Her Educational Details and College

The Congo native, Fiebig is a double degree holder. First, she graduated with a bachelor’s degree in French and Political Science from the University of Michigan. After that, she went to study law at Vanderbilt University Law School. While at the college, she was a part of the Phi Delta Phi Honors Fraternity too.

She did her elementary schooling in Florida.

Marilee Fiebig’s Parents; Her Father Was A Former Peace Corps

Her father William Fiebig was a US peace corps volunteer in Congo. Marilee considered her dad a real superhero. She even described her father as “a real-world humanitarian and my superhero.”

Similarly, her mom Pauline Fiebig was an African native who grew up with a lack of educational opportunities. Both of her parents moved to the US for better opportunities and they lived there for many years. Later, the family moved back to Africa and worked for the betterment of society.

After returning back, Marilee’s father started using his credential in agronomy and genetics in bringing agriculture and fishery to impoverished villages and communities throughout the nation.

On the other hand, her mother emphasized the importance of education for her kids. It was when all of her kids were at elementary school in Florida, Marilee’s mother Pauline got her U.S. citizenship.

Marilee Fiebig’s Career as an Immigration Lawyer; Her Mother’s Struggle Inspired Her To Start Her Career in Law

As said earlier that Marilee Fiebig received her degree in Law from Vanderbilt University. After that, she started practicing law and worked as an immigration lawyer in Atlanta and NYC for more than a decade.

Her choice to serve as an immigration lawyer is greatly influenced by her mother’s journey as an African immigrant to America. While talking about her life experiences in the US, she once stated,

“I watched my mom go through the immigration process, being married to a U.S. citizen, having children with dual nationalities at the time, and so that whole process struck a cord with me.”

She is a former Atlanta-based Attorney who now works as a Chief Diversity Officer at Save the children which she joined in 2021.

Marilee served in the vice-president position at Wilhelmina International Inc., a modeling agency company. While being a part of Wilhelmina, she also worked as a Fashion and Entertainment Executive who helped the modeling agency to get models to the US.

For getting the opportunity to work in such an upper position, especially as a woman, she said she really admired the company. In this regard, she told,

“I credit the company for recognizing the importance of a woman’s point of view in upper management,”

“As a woman, I think I have a natural empathy for them [models] and can provide a unique perspective. I fully embrace that part of who I am.”

Furthermore, while working for the company, Marilee Fiebig also served as Wilhelmina’s in-house lawyer in 2016 just before the MeTooMovement. As an in-house lawyer of a fashion company, Fiebig successfully secured non-migrant and immigrant visas for countless other clients. She also worked on behalf of multinational financial and technology businesses, major universities, and others.

After Wilhelmina, Fiebig became the chief of staff at Roc Nation. As per her bio on Unlock Her Potential, “she was the CEO’s right hand on all Roc Nationa platforms and business needs.”

Further, she was also the mentor for Unlock Her Potential which seeks to “provide mentorship for women of color in the US & PR 18 yrs+.” As per her social media account, she is also on a Board of Trustees at Brooklyn Independent Middle School.

The Atlanta-based attorney is a second wife to ABC News anchor T.J. Holmes. The couple tied the knot on March 1, 2010. And their wedding was held in Memphis, Tennessee.

After their marriage, the beautiful couple was on great terms with each other. Marilee always supported her husband through thick and thin. T. J. Holmes once said of his wife that he became a better person by the arrival of Fiebig in his life. Regarding this, he stated,

“My family and I are closer, my individual net worth has gone up every year since we met, I’ve learned a second language, I’m healthier, I use the N-word less, I listen to Sunday church service more, I’m a better friend, I’m more forgiving than I used to be, I’m more involved in charitable work,”

“In every way, I’m better off because I’m married.  I like who I am with her.”

But coming up to 2023, it seems like their decades-long relationship is on the verge of divorce. Sources reported that Holmes had been in multiple affairs with his colleagues., especially his closeness with his co-host Amy Raboch hit the media. Amidst all these, there are also reports that Marilee and her husband have separated.

Are Marilee And Her Husband Holmes Separated?

The couple was together until August 2022. Marilee even celebrated her husband’s birthday on August 19 and wished him on her Instagram (which now is private). But suddenly, her spouse’s extra-marital affair surfaced in the media in November 2022 and reports started coming out that the couple also ended their decade-long marriage.

Although their long-time marriage hit a roadblock in November, it seems like her better half Holmes wanted a separation from her a little bit earlier. In 2020, on his marriage anniversary, T.J. wrote on his Facebook account,

10 years ago, Marilee Fiebig married me. And despite my best efforts, she remained married to me the past 10 years. That’s not hyperbole. I’m not being dramatic. I gave her plenty of reasons, excuses, and opportunities to walk her fine ass out the doooooooor.

He also once talked about their marriage on his Instagram and wrote,

“End the relationship and cry once. It’s better than being with them and crying daily.”

Looking at his statements, it can be said that T.J. may have fallen out of love with his wife Marille a year before their separation.

Her Husband, T.J. Holmes Is Reportedly In a Relationship With Amy Robach

As said earlier, Holmes’s affair with his co-host Amy Raboch of the Good Morning America show made a series of headlines in November 2022.

Regarding the alleged romance, one of their colleagues told to US Weekly,

“the GMA staff for the most part all knew that something was happening between Amy and T.J., they were always playful with each other, like two people who were dating,”

An insider further told T.J. and his new partner Amy were trying to keep their romance private,

“Amy and T.J. didn’t seem like they were trying to keep their relationship secret anymore, everyone around the office could tell there was a spark between them for many months.”

There are also some reports that Holmes, before Amy, was in a three-year extramarital affair with GMA producer Natasha Singh. After her hubby’s multiple extra-marital affairs, sources said that Fiebig is completely devasted,

She’s devastated. She had no idea. “They haven’t been together in [a while], but they were trying to work it out. “They were just together for T.J.’s birthday,” which is Aug. 19.

Does Marilee Fiebig Share Any Children With Her Husband T. J. Holmes?

From her decade-long marriage, Marilee and her husband became the parents of a daughter Sabine who came into this world in January 2013. As of 2023, their daughter Sabine is 10 years of age. The mother-and-daughter duo is absolutely close with each other. After her separation from her spouse, Marilee is raising her daughter with values and determination.

In July 2020, Fiebig said of her daughter on Instagram,

“I want our daughter to be, first and foremost, kind. But I also want her to be curious. I want her to be confident in asking questions, seeking answers and exercising her voice.”

Marilee and her spouse Holmes have only one child together. But her husband of 12 years is also a father of two other children. T.J. Holmes shares a daughter Dian with his ex-wife Amy Ferson and a son Jaiden with his ex-girlfriend Brooke Moore.

As per sources, Marille has an estimated net worth of $1.5 million. Her major source of income is her wide and impressive career. On the other hand, her famous husband T.J. Holmes has a fortune of $3 million.